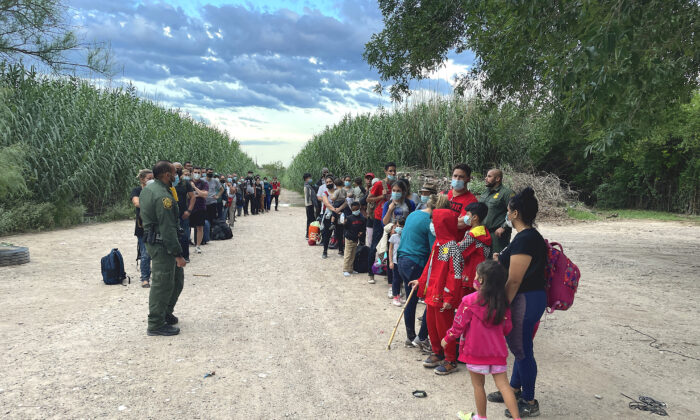 A group of Venezuelans wait to be picked up by Border Patrol after illegally crossing the Rio Grande from Mexico into Del Rio, Texas, on June 3, 2021. (Charlotte Cuthbertson/The Epoch Times)
Viewpoints

A Tsunami of Crises About to Swamp Biden Administration

The Biden–Harris administration is now in an extended levitation of credibility. Except for Donald Trump, who entered office in the midst of a public relations terror campaign against him and had no trace of a political honeymoon, all incoming presidents arrive with a favoring wind of bipartisan goodwill behind them.

Especially as President Joe Biden came into office promising a quieter and more genteel atmosphere and has largely done that, it isn’t surprising that his general popularity has been sustained at somewhat above 50 percent these first five months. But for a long time, the Democrats haven’t had any war cry except “We’re not Trump” and “That is racism.”

In service to that credo, from Inauguration Day, they have taken the position that they would do the reverse of anything Trump did: outright reaction unsupported by any analysis. Nothing else is conceivable as an explanation for their southern border policy.

As Vice President Kamala Harris checked the box by going to El Paso, Texas, 800 miles away from the more agitated areas of illegal southern entry last week, she repeated the mantra that this administration inherited a mess. The polls are unanimous in indicating that the public realizes they didn’t inherit a mess; they inherited the almost complete end of illegal immigration and they squandered it instantly and jubilantly by effectively inviting the world to enter, while having the hapless Homeland Security Secretary Alejandro Mayorkas repeat like a Disney World self-propelled puppet “The border is closed.”

Television viewers can switch channels from that almost daily pronunciamento to see illegal immigrants swarming across by land and through water. Illegal immigration is now running at the rate of 2 million a year, which is an unsustainable level of entry of almost entirely unskilled people who will severely strain the social, educational, and public security services of the southern border states.

It’s a crisis closing in upon a disaster, and the public can already see it approaching. All that can be said for the vice president’s visit to El Paso, where she was welcomed by the gushy local Democratic congresswoman to the “21st Century Ellis Island,” (where people arrived legally and some were rejected), is that it was nothing like as great a fiasco as her visit to Mexico and Guatemala three weeks ago.

There, she conspicuously failed to excite the enthusiasm of the American public to deluge more billions of dollars into those improvident areas in order to tackle “the sources of the problem”—the ancient liberal death wish of turning America’s pockets inside out to fight poverty in poor foreign countries by enriching their avaricious politicians.

The tsunami of crises about to break over this administration doesn’t stop at the southern border. It’s no longer possible to disguise that inflation is stoking up. Awareness of this has been clouded and deferred because the composition of the index doesn’t necessarily reflect the needs of average families.

If the figures are broken out and averaged in traditional ways, the current rate of inflation appears to be something like 8 or 9 percent and it will continue to remain high while the Sanders wing of the Democratic Party, which was solely responsible for the so-called Biden-Sanders Unity Program, is sticking to its guns.

It demands and may force trillions more dollars to be thrown out of the windows of the Treasury and the Federal Reserve in an instant and artificial expansion of the money supply. The president’s latest wheeze for trying to satisfy Sanders while making a gesture to advocates of sane fiscal policy was his professed agreement on a bipartisan infrastructure bill, which almost everyone agrees is needed and is a good thing, followed a couple of hours later by the assertion that it wouldn’t be approved if not accompanied by a much larger “virtual infrastructure” measure.

The Republicans who had agreed the bipartisan measure rose in revolt and the president, as is his custom, (and as is made plausible by his frequently turgid inarticulation), announced that he had been misunderstood. For the first time, he’s under some pressure to work himself out of one of the jams that he has blundered into, instead of just shrugging it off and relying on the docile media to ignore it.

If he retains any of his old Senate bargaining skills, he may be able to come through it with his credibility intact. But he is trying to govern from a high wire, a very hazardous procedure for so unsteady a leader.

Even more urgent than the surging immigration and imminent inflation crises is the entirely predictable and much-predicted crime wave. Violent crime is up everywhere and especially in Democratic-governed cities that cravenly bowed to the outrageous demands in the “peaceful protests” of last summer that injured 2000 police personnel, killed approximately 50 people, and caused more than $2 billion of property damage.

The rioters, almost none of whom would have been Republican voters, demanded that the police be defunded and “reimagined” and this was done in many cities, generating violent crime increases of from 25 to 150 percent.

All Biden’s nonsense about shooting to hit people in the leg and enlisting social workers and psychologists to go out on 911 calls is vanishing in the vast cauldron of skyrocketing violent crime. Many formerly feasible neighborhoods are terrorized by gangs and conditions are undoubtedly aggravated by sluggish work from police forces that are tired of being the scapegoats for racist urban terrorists. The ranks of American urban police are thinning rapidly as the people in blue can easily find less hazardous and more highly appreciated work.

The president’s address on crime on June 23 took refuge in the usual Democratic arguments about gun control. No doubt the gun laws can be better enforced, but the counter-argument is that in such lawless conditions, the existence of firearms in most American homes is a factor of deterrence of crime and not an incitement to it.

Chicago has tough gun laws but its worst areas are shooting galleries where the arrest rates are so low that it is obvious that the police are either compromised by their association with violent gangs or confining themselves to the perimeters of the most crime-ridden areas and have abandoned the core of those areas to the Darwinian masters of them (and these desperate conditions are certainly not confined to Chicago).

The president was correct in his plan to give greater assistance to criminals returning to civilian life and to prison reform in general, but that will work better with nonviolent people who are generally chronically over-sentenced, and who are much less likely to be repeat offenders than their violence-prone fellow inmates.

This is a problem that disconcerts and frightens scores of millions of Americans. When the administration comes to its collective senses, it can go back to the Trump methods of protecting the southern border while giving their policy a name that connotes reform.

Biden can also stop being intimidated by Sanders and Rep. Alexandria Ocasio-Cortez and be assured of a large number of the reasonable majority with any serious gesture of fiscal restraint, at least up until the midterm elections. It might not be too late to damp down the psychology of inflation.

But there is no quick fix to violent crime. It will soon be impossible to hide from the necessity to intervene directly to finance the recruitment and proper training of at least 100,000 more police personnel.

The methods for reducing violent urban crime in the United States are now well-known and were demonstrated by the mayoral regime of Rudolph Giuliani in New York (1993–2001), and there is no alternative but to return to them and the federal government can incentivize that.