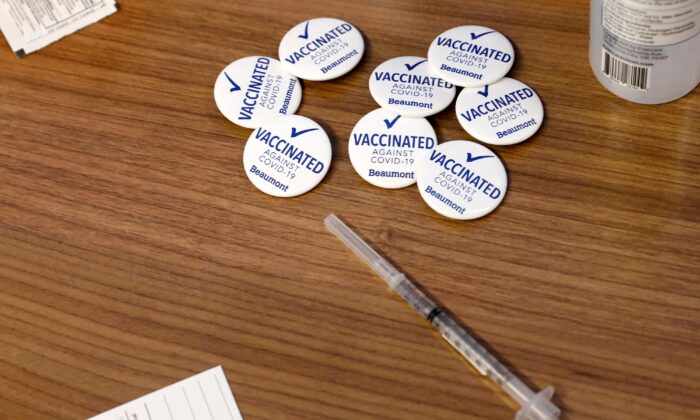 Pins for Beaumont Health Care workers after receiving their first dose of the Pfizer/BioNTech COVID-19 vaccine are seen next to a syringe at their service center in Southfield, Mich., on Dec. 15, 2020. (Jeff Kowalsky/AFP via Getty Images)
PUBLIC HEALTH INFORMATION

Michigan data show that 246 residents have tested positive for COVID-19 more than two weeks after being fully vaccinated against the virus that causes it.

The potential so-called vaccine breakthrough cases were recorded between Jan. 1 and March 31.

Eleven of the residents were hospitalized and three died, a spokesperson with the state Department of Health and Human Services (MDDHS) told The Epoch Times via email. The people who died were all 65 years of age or older.

The fully vaccinated cases were identified through weekly reviews of data on all confirmed and probable cases of COVID-19, the disease caused by the CCP virus. State officials compare the data to records of every person who has been fully vaccinated.

Fully vaccinated means two weeks have elapsed since a person has received two doses of the Pfizer or Moderna vaccine, or the single-shot Johnson & Johnson vaccine.

“These are individuals who have had a positive test 14 or more days after the last dose in the vaccine series. Some of these individuals may ultimately be excluded from this list due to continuing to test positive from a recent infection prior to being fully vaccinated. These cases are undergoing further review to determine if they meet other CDC criteria for determination of potential breakthrough, including the absence of a positive antigen or PCR test less than 45 days prior to the post-vaccination positive test,” the spokesperson said.

“In general, these persons have been more likely to be asymptomatic or mildly symptomatic compared with vaccinated persons. Please note, to date, more than 1.7 million Michiganders have completed their COVID-19 vaccine. Some of these cases may be ruled out via additional investigation.”

According to the Food and Drug Administration, Pfizer’s vaccine is considered 95 percent effective “in preventing COVID-19 disease.” Moderna’s is 94 percent, and Johnson & Johnson’s is approximately 67 percent.

“While the majority of the population develops full immunity within 14 days of completion of their vaccine series, a small proportion appear to take longer to mount a full antibody response,” the MDHHS spokeswoman said. “We expect to see breakthrough cases with any vaccination, including all the COVID-19 vaccines. The number of potential cases identified to date is not in excess of what might be expected with vaccines with 95 percent efficacy. Studies indicate that even if vaccinated people do become ill, they are far less likely to experience severe illness requiring hospitalization or resulting in death.”

Officials say the potential for breakthrough cases is why they still encourage Michiganders to take precautions while out in public, such as wearing masks, washing hands, and social distancing even after they’re fully vaccinated.

The Centers for Disease Control and Prevention (CDC) is creating a new website to provide additional information about investigating breakthrough cases. The site is expected to launch within the next several weeks. It will include summary data from all states, Michigan officials said.

Michigan Gov. Gretchen Whitmer told reporters last week that “zero percent of the people in our hospitals right now have been vaccinated, which tells you the vaccines work.”

Whitmer said during a press conference on April 6 that the efficacy rates mean some people who get the vaccines won’t gain complete protection.

“We’re delving into the numbers” on breakthrough cases, she said. “What we do know, though, is that this vaccine can save your life. This is a virus that none of us knows how our body is going to react to it. For so many, it has been fatal or devastating, or for many, we’re still learning how long are the impacts of this virus going to impact them, afflict them. So this vaccine still is the best way to protect yourself.”

Dr. Joneigh Khaldun, the state’s chief medical executive, said the shots “are some of the best vaccines that we have.”

“We’ve now got vaccines that are over 95 percent effective. And even if you do get COVID-19, and once you’ve had a vaccine, it is highly unlikely that you will be hospitalized or die,” she said.

Other states have also seen breakthrough cases. In Washington state, authorities reported last week that they found evidence of 102 such cases, with eight of the patients requiring hospitalization and two dying.

In a letter published on March 23 in the New England Journal of Medicine, a group of California physicians reported that out of 36,659 health care workers tested after receiving one or two doses of a COVID-19 vaccine, 379 tested positive for COVID-19 at least one day after vaccination. Thirty-seven of them tested positive after getting two shots, mostly within two weeks after the second injection.

“The rarity of positive test results 14 days after administration of the second dose of vaccine is encouraging and suggests that the efficacy of these vaccines is maintained outside the trial setting,” the doctors wrote.

Correction: A previous version of this article misstated the results of clinical trials of the vaccines. They were shown effective in preventing COVID-19 disease, according to the FDA. The Epoch Times regrets the error.