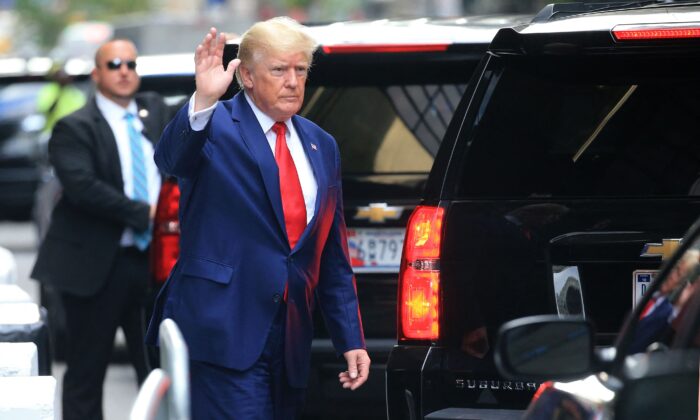 The Justice Department has to respond to motions to unseal a warrant that triggered the FBI raid on former President Donald Trump’s Mar-a-Lago home, according to a magistrate judge who reportedly approved the search.

Judicial Watch and the Albany Times Union newspaper filed a motion to unseal the document earlier this week, which was granted by a judge in the case.

“On or before 5:00 p.m. Eastern time on August 15, 2022, the Government shall file a Response to the Motion to Unseal,” wrote U.S. Magistrate Judge Bruce Reinhart on Wednesday afternoon, referring to the Department of Justice.

“The response may be filed ex parte and under seal as necessary to avoid disclosing matters already under seal. In that event, the Government shall file a redacted Response in the public record. If it chooses, the Government may file a consolidated Response to all Motions to Seal,” he wrote.

Neither the FBI nor Justice Department has issued public comments about the raid, which was first confirmed by Trump on Monday evening.

The FBI declined to comment when contacted by The Epoch Times, and the Justice Department has not responded to several requests for comment.

As for the White House, press secretary Karine Jean-Pierre said President Joe Biden was not aware of the raid before Trump’s announcement. Her claim was refuted by Trump on his social media platform, Truth Social.

“What I can tell you definitively and for sure, he was not aware of this,” Jean-Pierre said of Biden. “Nobody at the White House was. Nobody was given a heads up and we did not know about what happened yesterday.”

On Wednesday, the Times Union’s managing editor, Brendan J. Lyons, wrote to Reinhart to ask for the warrant to be unsealed.

“Given that the search warrant(s) have been executed, and the target of that search has full knowledge of what occurred, there is no impediment to any ongoing investigation from the disclosure of the search warrant order or the returns. As such, these records should be unsealed,” the letter to the Florida judge reads.

Judicial Watch asked for the warrant as part of an investigation into “the potential politicization of the Federal Bureau of Investigation and the U.S. Department of Justice and whether the FBI and the Justice Department are abusing their law enforcement powers to harass a likely future political opponent of President [Joe] Biden.”

It comes as Eric Trump, a son of the former president, told the Daily Mail that a Trump attorney at Mar-a-Lago, Christina Bobb, asked FBI agents Monday about seeing a warrant.

Top Republicans, meanwhile, demanded an investigation into the raid and argued that it was politically motivated to wound the GOP ahead of the 2022 midterms. Some have said the Justice Department immediately needs to release documents pertaining to the raid.

Senate Minority Leader Mitch McConnell (R-Ky.) said there needs be a “thorough and immediate explanation” of how the FBI raid on Mar-a-Lago was approved. Legal historians have said that such a raid against a former president is unprecedented.

“Attorney General Garland and the Department of Justice should already have provided answers to the American people and must do so immediately,” McConnel added.

Trump on Monday said that federal agents entered Mar-a-Lago despite him having cooperated with federal officials for months to return documents that he allegedly took from the White House after leaving office last year.

Reinhart came under fire Tuesday amid reports from several news outlets that found he had a connection to convicted sex trafficker Jeffrey Epstein. Reinhart left his job as an assistant United States in early 2008 before he began representing some of Epstein’s workers.

According to a 2018 Miami Herald report, two of Epstein’s accusers alleged Reinhart left his prosecutor job to give Epstein inside information. Reinhart denied those allegations.

As his connection to the Epstein case went viral on Tuesday, it appeared the U.S. Southern District of Florida removed the judge’s page from its website, according to archived versions of the website.