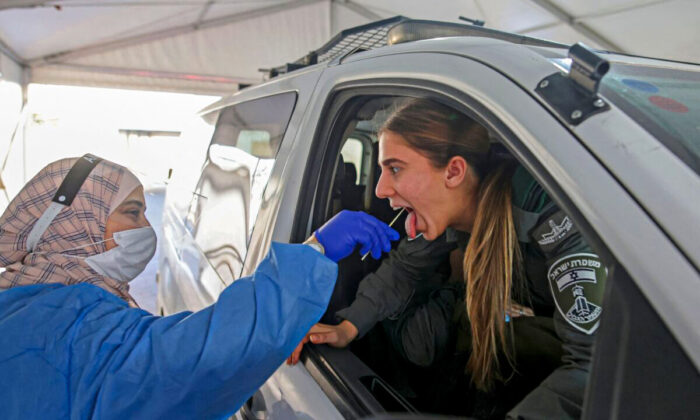 A medic collects a swab sample from an Israeli border guard at a COVID-19 drive-through testing site in a file photo. (Ahmad Gharabli/AFP via Getty Images)
WORLD

Israel, One of Most Vaccinated Countries in the World, Sets New COVID-19 Case Record

The Israeli Ministry of Health announced this week that more than 72,000 people tested positive for the CCP (Chinese Communist Party) virus, the largest rise in infections since the start of the pandemic.

Total active cases in the country rose to nearly 400,000 people, of whom 533 are currently hospitalized in critical condition, according to a Jan. 19 statement posted by the country’s health ministry.

Israeli Prime Minister Naftali Bennett warned this month that CCP virus cases are expected to increase rapidly amid the spread of the Omicron variant, as he presented government data that indicates two to four million Israelis are predicted to be infected with COVID-19 during the current outbreak.

“Information presented at a cabinet meeting indicates that in Israel, overall 2–4 million citizens will be infected in the current wave,” Bennett’s statement reads.

Israel, which has one of the highest COVID-19 vaccination rates in the world with already nearly half of its citizens having received three shots, is leading the world in new daily cases per capita, according to Jan. 20 data.

Eran Segal, a biologist at the Weizmann Institute of Science, verified this data, explaining that after comparing the numbers of each country’s seven-day running average, Israel is at the top, The Times of Israel reported.

The country’s health ministry announced last week it started administering second boosters to the most vulnerable group of people and already 500,000 people have received the fourth shot. In total, nearly 73 percent of Israeli’s have received at least one dose while roughly 66 percent are fully vaccinated, according to government data.

Israel was among the first countries to roll out vaccines a year ago and began widely offering third doses last summer in a bid to contain the Delta variant. Authorities have said they hope the fourth shot will blunt a wave of infections driven by Omicron.

An Israeli researcher said on Jan. 17 a second booster dose of Pfizer’s COVID-19 vaccine does induce antibodies, but likely not at a level high enough to protect recipients against infection from Omicron. Much of Israel’s COVID-19 vaccination program uses the Pfizer jab.

“Two weeks after administering the fourth vaccine, we see a good increase in the antibodies, higher than after the third dose, but not high enough against Omicron,” lead researcher Prof. Gili Regev-Yochay told reporters in an online briefing.

Omicron has proven better at evading antibodies induced by COVID-19 vaccines than earlier strains and has infected millions of vaccinated people around the world in recent weeks, sparking a renewed effort to get people boosted.

On Tuesday, Bennett again encouraged Israelis to get jabbed. The leader promoted earlier preliminary results from a Sheba Medical Center study that showed a high level of antibodies a week after workers received the fourth dose, touting “a five-fold increase in the number of antibodies” in the recipient of the vaccine.

The early data indeed indicated that the booster restored some of the lost protection against infection, but that the protection again dropped after just a few weeks. Similar results have come in for the second booster, according to preliminary results from the Sheba study, which have not yet been published.