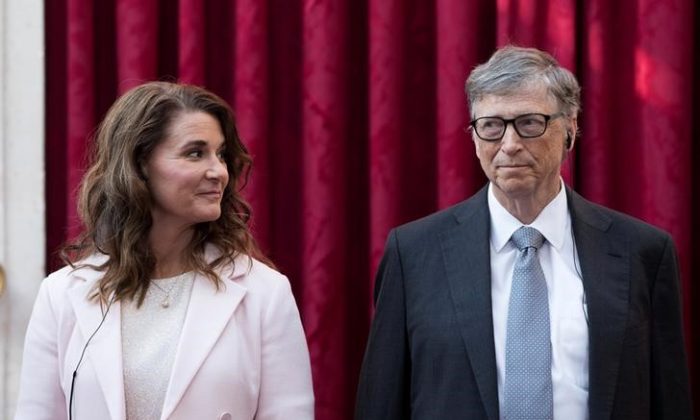 Philanthropist and co-founder of Microsoft, Bill Gates (R) and his wife Melinda listen to the speech by French President Francois Hollande, prior to being awarded Commanders of the Legion of Honor at the Elysee Palace in Paris, France, on April 21, 2017. (Kamil Zihnioglu/Reuters)
US News

Melinda Gates has said that billionaire Bill Gates’ relationship with “evil personified” Jeffrey Epstein played a part in her divorce from the Microsoft co-founder.

Epstein was found dead in a New York federal jail on Aug. 10, 2019, at the age of 66. At the time, he was awaiting trial on sex trafficking charges for abusing women and girls in Manhattan and Florida from 2002 to 2005.

He had pleaded not guilty. His death was ruled a suicide by hanging.

In her first public interview since the couple announced their split in May last year, Melinda explained that while a number of things had contributed to her separation from the billionaire businessman, his relationship and meetings with the late financier had also played a part.

Speaking to CBS, Gates explained, “It’s not one thing, it was many things. But I did not like that he had meetings with Jeffrey Epstein.

“I made that clear to [Bill],” she said, adding that she had also met Epstein, whom she described as “evil personified.”

“I also met Jeffrey Epstein exactly one time. Because I wanted to see who this man was. And I regretted it from the second I stepped in the door. He was abhorrent. He was evil personified. I had nightmares about it afterward so you know, my heart breaks for these young women, because that’s how I felt. And here, I’m an older woman. My God, I feel terrible for those young women. It was awful,” she said.

When asked whether Bill Gates has continued to spend time with Epstein after she had raised her concerns and dislike for him with her then-husband, Melinda declined to elaborate.

“Any of the questions remaining about what Bill’s relationship there was—those are for Bill to answer,” she responded. “But I made it very clear how I felt about him.”

Bill Gates has said on multiple occasions that he regrets meeting with Epstein while trying to raise money for his foundation.

At The New York Times’s Dealbook conference on Nov. 6, 2019, Gates said, “I made a mistake in judgment that I thought that those discussions would lead, literally, to billions of dollars to global health.”

“And I gave him some benefit by the association. So I made a doubly wrong mistake there,” he added.

Last year, Gates, one of the wealthiest people in the world, told CNN that he had “several dinners” with Epstein about 10 years ago, years after the financier had been convicted and sentenced for soliciting prostitution from a minor.

Epstein in 2008 pleaded guilty to the charges, serving 13 months in custody but with extensive work release.

Gates said the pair had discussed the prospect of receiving billions of dollars in philanthropy but that their association ended after it “looked like that wasn’t a real thing.”

“I had several dinners with him, you know, hoping that what he said about getting billions of philanthropy for global health through contacts that he had might emerge, and when it looked like that wasn’t a real thing, that relationship ended,” Gates said at the time.

“But it was a huge mistake to spend time with him, to give him the credibility of, you know, being there, there were lots of others in that same situation, but I made a mistake,” he said.

Bill and Melinda announced their billion-dollar divorce in May last year following 27 years of marriage.

Philanthropist and former computer scientist Melinda told CBS that while the pair enjoy a decent working relationship and are “friendly” with one another, there was still a lot of “healing” she needs to do before they can be “friends.”