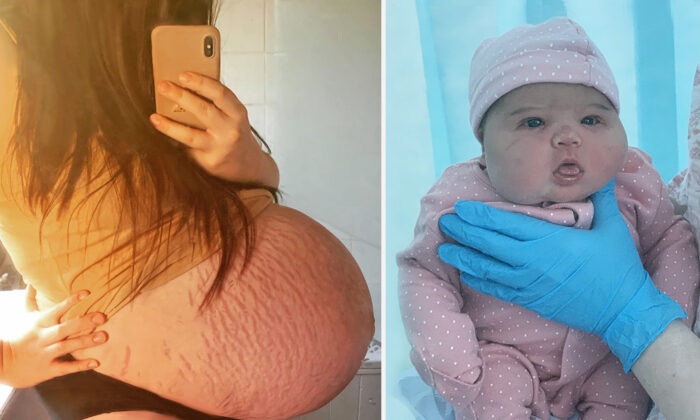 A woman with a gigantic baby bump, which was so large that doctors thought she had a secret twin, has given birth to an over 12-pound 15-ounce (5.89 kg) newborn.

First-time mom Amber Cumberland, 21, from Aston, Oxfordshire, gave birth to her daughter Emilia on April 16. The little girl is considered to be the second-biggest baby girl ever born in the United Kingdom, following the 2012 record-breaker who was born at 14 pounds 4 ounces (approx. 6.4 kg).

Baby Emilia created such a big bump during pregnancy that doctors weren’t sure if there would be a surprise second baby during labor.

“Doctors thought it was twins during pregnancy because she was so big, even though we could only see one on the ultrasounds,” Amber said. “We heard it so much we actually started to believe there was another one hiding in there.”

During Amber’s pregnancy, she and her partner, Scott Joy, 22, would visit the supermarket to see if anyone would comment on her baby bump, and almost every time, they would.

Baby Emilia began measuring big in the third trimester, reaching the average size of a 36-week baby by her 32-week scan, and was estimated at around 8 pounds 12 ounces (4 kg) on an extra growth scan at 36 weeks.

Amber’s giant pregnancy bump created lots of painful complications and so she couldn’t wait to be induced and get her baby out. She tried home remedies to induce herself and get things moving, but nothing worked.

“I was so desperate to get her out I tried everything—I ate half a kilogram of raw pineapple, used essential oils and bath salts, even acupressure—anything I read online that might help,” Amber said.

“The bump was so big I got lots of stretch marks and my skin was so weak from being stretched out that they would bleed if I stood up too quickly.”

Amber suffered from awful sciatica and compressed nerves in her hips and legs because of baby Emilia’s weight. She was unable to roll over the bed and would need Scott’s help.

She was finally induced at almost two weeks overdue. Scott spent 42 hours in the car park of John Radcliffe Hospital in the space of three days leading up to the birth; he was not allowed to join Amber until she was in active labor because of restrictions in place due to the CCP (Chinese Communist Party) virus, commonly known as the novel coronavirus.

The then expectant mom spent 24 hours in labor until baby Emilia entered the world via an emergency C-section.

“I got to eight centimeters dilated and she couldn’t go any further—if she went any further down they wouldn’t be able to get her back up and she would’ve got stuck,” Amber said. “My stomach muscles completely split to the point where the doctors could barely distinguish them during the C-section and said they were the worst they’d ever seen.”

Emilia was so big that it took two people to lift her out and one to hold everything back to get her out. Amber said that even the outfit didn’t fit her. Luckily though, the parents had spare 0–3-months clothes packed, and the hospital staff also hunted down bigger nappies.

“Nurses at the hospital even stayed over time to see the weight of the baby and take photos with her because she was so big,” Amber said.

Just over a week after giving birth, Amber is starting to heal, but expects to take a while to fully recover due to the damage caused to her body by the difficult pregnancy and birth.

She is currently on a waiting list for physiotherapy to help heal her badly split stomach muscles.

“I’ve still got a completely numb bit of skin around my belly button where the nerves have just given up,” Amber said. “Because of the damage to my stomach muscles the stitches have no support and I have to be really careful.”

Amber still can’t pick baby Emilia up or breastfeed her because she is still so “heavy.” She also said there is no protection for her organs, but she is slowly trying to get better.

“I’m still as uncomfortable as when I was pregnant but I do feel a lot lighter and have no more trapped nerves which I’m very grateful for,” Amber said. “We’re both so overjoyed with our gorgeous little girl.”