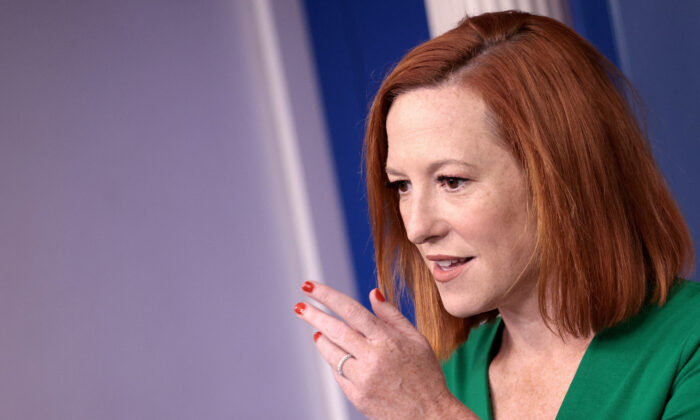 White House Press Secretary: ‘We’re Not Going to Lock Down Our Economy or Our Schools’

“This is not March 2020 or even January 2021. We’re not going to lock down our economy or our schools because our country’s in a much stronger place than when we took office,” Psaki told reporters in Washington.

She credited President Joe Biden’s “leadership in vaccinating American people and getting economic relief to those who need it.”

COVID-19 cases and hospitalizations have increased across the country in recent weeks, a rise officials have attributed to the Delta variant of the CCP (Chinese Communist Party) virus, which causes COVID-19.

While some teachers unions have recently called for all-virtual classes to be held at the beginning of the upcoming school year, and a number of states and counties have re-imposed mask mandates and put into place vaccine verification requirements, the United States isn’t poised to go into the lockdown it did last year, Psaki said.

“We are not going back. We are not turning back the clock,” she said.

The U.S. government has been preparing for the possibility of the virus evolving and becoming more difficult to deal with.

The remarks contrasted with Psaki deferring to states in a briefing last month when asked if the White House would attempt to reimpose harsh restrictions due to the pandemic.

But she said Biden would support states if they went into lockdown again.

Psaki’s new message echoed one offered by Dr. Anthony Fauci, a top medical adviser to Biden, over the weekend.

Fauci said Sunday on ABC that things will get worse due to the Delta variant.

But, he added, “I don’t think we’re going to see lockdowns.”

“I think we have enough of the percentage of people in the country, not enough to crush the outbreak, but I believe enough to not allow us to get into the situation we were in last winter,” he said, referring to the number of people who have been vaccinated against the CCP virus.

Earlier Friday, Biden touted statistics saying over 70 percent of adults 18 or older have gotten at least one COVID-19 dose.

The vaccines were developed during the Trump administration but the effort to vaccinate Americans ramped up once Biden took office.

Biden also warned of the Delta variant, urging people to get vaccinated to protect themselves against it, but said the economic toll would not be as bad this time around as last year, when millions of people lost their jobs amid the lockdowns.

“America can beat the Delta variant just as we beat the original COVID-19,” he said in remarks made in Washington. “We can do this. So wear a mask when recommended. Get vaccinated, today. All of that will save lives and it means we are not going to have the same kind of economic damage we have seen when COVID-19 began.”

Schools have the resources to safely reopen, according to the president.

Biden later hinted at new rules under consideration, after requiring federal workers to show proof of vaccination or wear masks and socially distance while at work.

“There will be more to come in the days ahead,” he said.