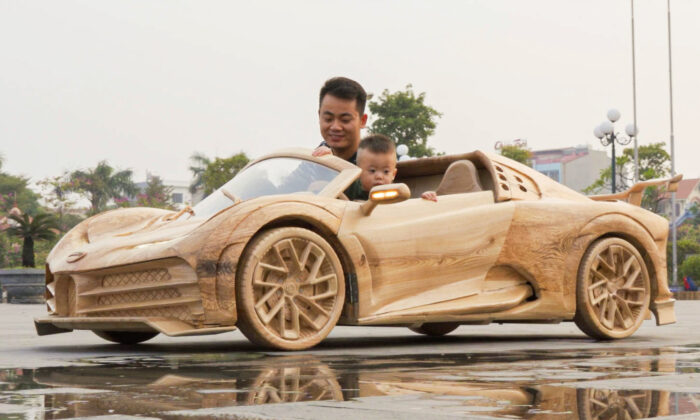 In the age of social media, craftsmen and artisans have been made into unlikely stars, thanks to YouTube and DIY viral videos.

The novelty of wood carving has made one Vietnamese man famous when he started crafting ultra-expensive supercars out of oak.

He recently modeled the world’s most expensive road racer, the Bugatti Centodieci—worth a cool $8.9 million—a project that took 40 days to complete.

“I was born in a craft village and was exposed to wood carving from a young age,” he told The Epoch Times. “I have been doing carpentry for more than 10 years.

“I came up with the idea to make a drivable wooden car when taking my kids out to the park, my kids love these mini electric cars.”

Before tackling the Bugatti in December 2020, Dao carved a Ferrari Aperta, which had no power and could only go straight. “I later improved it to be able to steer smoothly and have an electric motor,” he said.

Of course, Dao’s sports cars aren’t life sized; they’re scaled down so that a young boy can get behind the wheel. But that doesn’t diminish the impressive detail and craftsmanship in his works.

Dao starts by building a wooden chassis, installing electric motors and a drivetrain. With this as a base, he mounts the body, starting out as thick sheets of wood, which is then intricately carved to match the sleek lines of each stylish car.

The hood, fenders, bumper, and rear are almost all carved using a chainsaw, which he says really speeds up the work. Whatever the chainsaw can’t do, combinations of wood planer, chisel, and sandpaper are employed.

Finer details, such as rims, grille, hood ornaments, and steering wheel, are all crafted out of wood. Plexiglas is used for the windshield, and real electric lights are installed.

The interior includes wooden bucket seats and even a sleekly-carved transmission and dashboard.

Dao then sprays on a finish that brings out the rich tones of the wood, with the reflection of a gorgeous, polished paintjob.

The finished product is something else to say the least.

As far as performance, Dao said that the Bugatti can probably reach 20 kilometers (12.5 miles) per hour, but he slowed it down to about half that for safety.

“After making a Bugatti, I have built a BMW Hommage, a Lamborghini Sian, and most recently a Ferrari GTO,” Dao said.

The woodworker often shows off his work on social media. He took several time-lapse videos while he was carving his cars, and then recorded a test drive, on the road with his son to show off the final product.

Those videos soon went viral, and Van has become somewhat of a local celebrity.

“I never thought I would be famous after making the car,” he told the newspaper. “Many foreign news sites have shared my story.

“In Vietnam, my pictures are everywhere.

“I am very happy when people compliment me a lot, some even wittily say that I am the craziest carpenter in the world.”