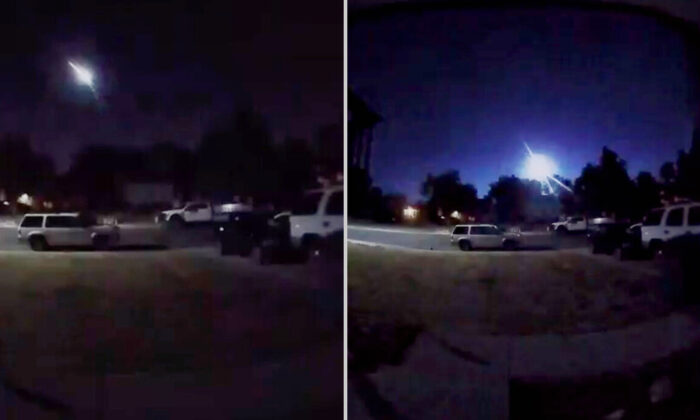 A flash of light, three times as bright as a full moon, lit up the night sky over the mountains of Colorado on Sunday, Oct. 3.

As fall descends upon us, meteor season’s in full swing, and is expected to increase as we head further into October—It’s already started off with a bang.

Multiple eyewitnesses, from Castlerock to Boulder, Colorado, reported a streak of light traveling north of east, around 4:30 a.m. Mountain Time, which then exploded in midair, seemingly turning night into day for a split second, according to NASA Meteor Watch.

With abundant sightings of the meteor reported, which were confirmed by Cloudbait Observatory and lightning mappers aboard two satellites, the American Meteor Society is conducting an analysis of the event.

“The meteor first became visible 54 miles above the mountains just east of Vail, moving slightly north of east at 55,000 miles per hour,” NASA Meteor Watch stated. “During its 30 mile journey through the upper atmosphere, the object fragmented twice, causing flares of light as bright as the full Moon. It disintegrated at an altitude of 35 miles above Vasquez Peak, producing a flash of light 3 times brighter than the full Moon, briefly lighting up the sky.”

The meteor reportedly appeared outside of Estes Park, and is thought to have headed somewhere near Boulder, west of Denver.

Two distinct meteor showers are currently active this month of October; one is the Southern Taurids, lasting from Sept. 10 to Nov. 20; the other is the more impressive Orionids, from Oct. 2 to Nov. 7, peaking on Oct. 21.

Presently, stargazers can witness an estimated 13 meteors per hour in the early morning sky, according to the Meteor Society.

So, keep an eye on your door cam as meteor seasons gets busy—and share the footage if you spot a fireball in your neck of the woods!