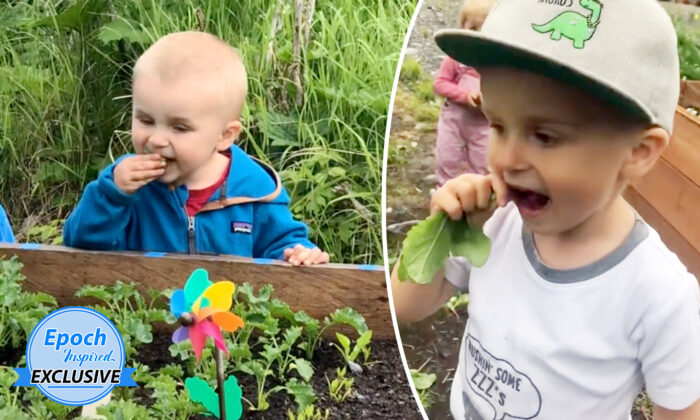 A precocious 4-year-old Alaska boy loves eating veggies straight out of the garden and can detail spot-on nutritional facts learned from his parents, and books, with every bite.

The Anchorage family’s adorable videos of their little boy munching on the garden-fresh produce have gone viral, and social media users simply can’t get enough of him.

Parents Trent and Oksana Foldager, both in their mid-30s, share two kids: Jack Danger, 4, and his baby sister, Zemyna, 2.

“It started as more me and Oksana sharing our videos with each other, because I work an extended schedule at work,” Trent, who works on tugboats, told The Epoch Times by email.

One day, on a whim, Trent uploaded a video of Jack eating a raw turnip on TikTok, and the footage trended overnight. “It was a shock for sure,” said Trent. “I think the turnip video got over 200,000 views the first night.”

Trent said Jack has always been a curious child and retains knowledge well. He likes a couple of different books; one of his favorites is the “Simple Happy Kitchen” book.

“His mom and I spend a lot of time helping and teaching him about food and what it does for your body,” Trent said.

“We try to incorporate a little bit of nutrition facts into every meal, and although sometimes it seems he’s not listening, he retains the info and it sticks.”

Jack has had a say in his diet from the get-go. His parents always gave him healthy options, putting two healthy foods on his plate when he grew old enough to make his own decisions, and letting him pick which he wanted.

The proud parents said that getting Jack into the garden as much as possible has been “very beneficial.”

“It’s actually hard to get anything to grow right now, because he eats it before it grows fully,” Trent said jokingly.

In the family’s series of TikTok videos, little Jack wanders around the garden pulling vegetables or green leaves and eating them.

The smart kindergartner knows that kale has fiber, rhubarb makes pie, plants need sun, soil, water, and worms to grow, and that many vegetables have calcium which can make his bones “grow strong.”

The little boy with the love for veggies is also busy playing lego, making friends at school, fishing, and mountain hiking with his grandparents.

Trent describes Jack as a smart and outgoing boy and says his little son’s “legitimate humor” makes the family laugh all the time.

“He also wakes up at 5 a.m. every single morning; not a personality trait, but it’s very Jack Danger,” said Trent. “Every morning we have to do science experiments or build robots, even before I’ve had my coffee.”

While Jack’s parents say his tastes change weekly, his current favorite vegetable is carrots. However, the 4-year-old can’t quite forgive the taste of cooked broccoli.

The family’s heartwarming TikTok videos have amassed millions of views to date. Trent says he will continue to post as long as everyone is enjoying the venture.

Trent was initially worried about the comments they might receive on Jack’s videos, but said the vast majority have been positive. He and Oksana have already exchanged “a lot of messages” with other parents asking questions about healthy eating.

“We are trying really hard to do things right,” Trent said, “and to have such positive comments and reactions is really nice and uplifting.”

To other parents keen to get their kids into healthy eating, Trent advises, “Just keep trying. It’s not easy, but patience and consistency are key.

“I’ve always felt leading by example is the best way to get results with anyone, so we try to set a good example ourselves,” he said. “Kids’ tastes change, so trying lots of different colorful options will get results.”