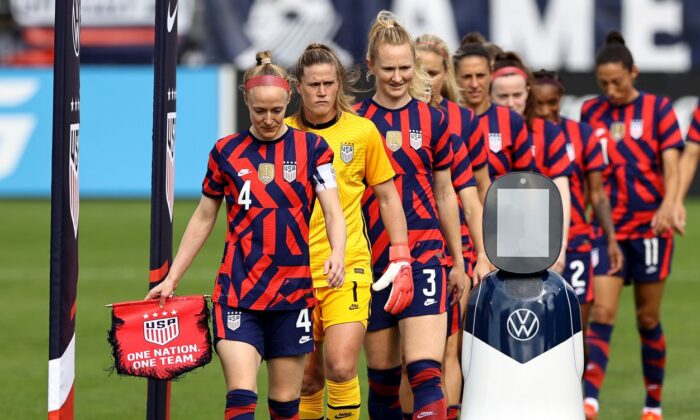 The U.S. women's soccer team ahead of a match with Mexico at Pratt & Whitney Stadium at Rentschler Field in East Hartford, Conn., on July 05, 2021. (Elsa/Getty Images)
US News

U.S. Soccer responded to allegations the women’s national team slighted a World War II veteran and the American flag during a match with Mexico on Monday.

A video clip showed some members of the women’s team facing away from the veteran, Pete DuPre, who was playing the harmonica for the U.S. national anthem.

This is respect. Each and every player waited for their opportunity to come up to Pete post-game before getting on the bus, said hello, thanked him and signed his ball. https://t.co/0fhtkTSxIF

It prompted some to claim that the members were attempting to protest against the flag and were being disrespectful toward DuPre. But U.S. Soccer denied those claims in a tweet late on Monday night.

“To be clear, no one turned their back on WWII Veteran Pete DuPré during tonight’s anthem. Some USWNT players were simply looking at the flag on a pole in one end of the stadium,” the organization tweeted. “The players all love Pete, thanked him individually after the game, and signed a ball for him.”

As bad as the U.S. Women’s National Soccer Team is for a lot of reasons, this does not appear to be accurate.

They were facing the flag near the scoreboard and several of the women that turned had their hand on their heart so it’s hard to argue they were being disrespectful. https://t.co/kQmaLwHlFe pic.twitter.com/SJP8wFX1eZ

The organization also posted a video of team members signing his ball.

“This is respect. Each and every player waited for their opportunity to come up to Pete post-game before getting on the bus, said hello, thanked him, and signed his ball,” U.S. Soccer wrote.

The entire video of the national anthem performance suggested that the players were not being disrespectful and were facing the American flag near the scoreboard. When DuPre was finished, they faced him and clapped.

Some members of the U.S. Soccer team, however—including star player Megan Rapinoe—have taken a knee to protest during the playing of the national anthem in previous contests. Rapinoe infamously took a knee in 2016 after former NFL quarterback Colin Kaepernick began doing so before games.