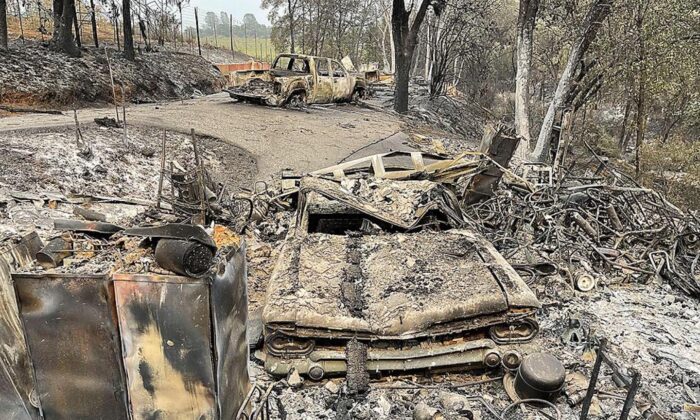 A classic Chevrolet El Camino that was lost along with the home of "Pete" Reyna in Chicago Park on Aug. 7, 2021. (Elias Funez/The Union via AP)
US News

Forecasters are warning Americans to prepare for an intense heatwave this week that is building over parts of the United States, with several states approaching, or hitting the triple-digit high temperatures.

“It’s going to be a real oppressive week with dangerous heat and hot conditions,” the National Weather Service said.

“Excessive heat watches are up across much of the Pacific Northwest,” it added. “Meanwhile, heat advisories are in effect for a good part of the south-central U.S. and parts of western New York state.”

The agency noted that triple-digit temperatures and above-average heat are possible in much of the Great Plains and Upper Midwest states. Daily high temperatures will also be “near-record setting” in the central and southern High Plains.

Pretty much everyone across the CONUS can expect some temperatures in the “Ooof” zone this week. Especially in the NE and NW with temperatures building to 10-15 degrees above average.

“Pretty much everyone across the CONUS can expect some temperatures in the ‘Ooof’ zone this week,” forecasters said.

An excessive heat warning was issued for Tuesday across the West Coast with temperatures reaching 115 degrees Fahrenheit in Death Valley—a desert area in Eastern California. During the summer period, it is one of the hottest places on Earth.

The warning comes amid raging wildfires in the state of California that are among some 100 large blazes burning across 15 states nationwide, mostly in the West, where drought has left lands parched and ripe for ignition.

The Dixie Fire was the largest wildfire burning in the country. Nearly a quarter of all firefighters assigned to Western fires are fighting California blazes, said Rocky Oplinger, an incident commander.

High-pressure building over the Western United States means that the weather would heat up and dry out again in the next few days as temperatures possibly hit the triple-digit high on Wednesday and Thursday, along with a return of strong afternoon winds, fire meteorologist Rich Thompson said.

In addition, monsoonal moisture coming up from the south could produce a chance of thunderstorms heading into the weekend that could bring dry lightning and gusts that produce a greater fire threat, Thompson added.