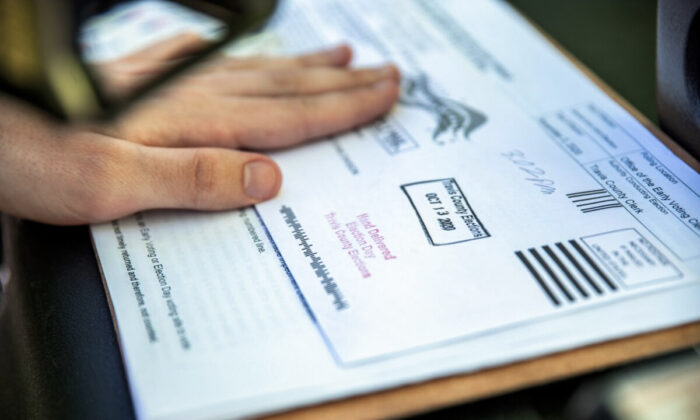 A poll worker stamps a voters ballot before dropping it into a secure box at a ballot drop off location in Austin, Texas on Oct. 13, 2020. (Sergio Flores/Getty Images)
Election Integrity

An estimated 27,000 mail-in ballots in Georgia were returned as undeliverable by the post office during the 2020 election, according to a research brief by a good-government group. The number is more than double the margin of victory—12,000 votes—by which President Joe Biden won the state.

The new report from the Indianapolis-based Public Interest Legal Foundation (PILF) raises questions about the efficacy of voting-by-mail policies that were hurriedly adopted across the nation in the early days of the pandemic last year, purportedly to arrest the spread of the CCP virus that causes the disease COVID-19.

PILF describes itself as “the nation’s only public interest law firm dedicated wholly to election integrity,” existing “to assist states and others to aid the cause of election integrity and fight against lawlessness in American elections.”

The Biden administration is challenging the Georgia electoral reforms, including the state’s new voter identification requirements, in the courts. If the administration is successful, “the problems experienced in 2020 can only get worse if the current volume of absentee ballots holds in future contests,” the brief stated.

“You can’t ‘vote from home’ with confidence when you learn how many mail ballots failed. The fact that the Biden Justice Department is committed to interrupting Georgia’s integrity law demonstrates the level to which Washington bureaucrats will sink to preserve system weaknesses.”

In the 2016 election, 236,925 ballots were mailed to voters and 1,622 of those ballots were returned as undeliverable. At the same time, 13,677 ballots returned by voters were rejected by election officials, and 21,976 were placed in the “unknown” category.

When the U.S. Election Assistance Commission gathers election data, it asks local officials how many ballots weren’t returned as voted, were returned as undeliverable, or were otherwise “unable to be tracked,” according to the PILF brief.

The U.S. Postal Service inspector general previously reported that only 13 percent of mail ballots in the 2018 general election took advantage of the official tracking system.

“This means [there is] a wide variety of things that can happen to a ballot in the ‘unknown’ column,” the brief stated.

“A ballot can be misdelivered. It can be thrown out with your unpaid bills. It can be left on the floor of apartment mailrooms (like seen in Nevada in 2020). Election officials simply do not know what happened.

“Unknown ballots are one of the greatest weaknesses in the American electoral system. The unknown ballots that fail to reach their intended destinations are naturally susceptible to mischief if voter identification safeguards are not present.”

“These figures detail how the 2020 push to mail voting needs to be a one-year experiment,” Adams told The Epoch Times last month.

Bills pending in Congress such as the proposed “For The People Act,” “risk inflating these numbers even further, pushing our election system toward error, disenfranchisement, and ultimately widespread doubt about election outcomes,” Adams said.

“Some of the counties with the least experience in administering mail voting rejected the most ballots nationwide. If continued, 2020-style chaos will become the norm.”