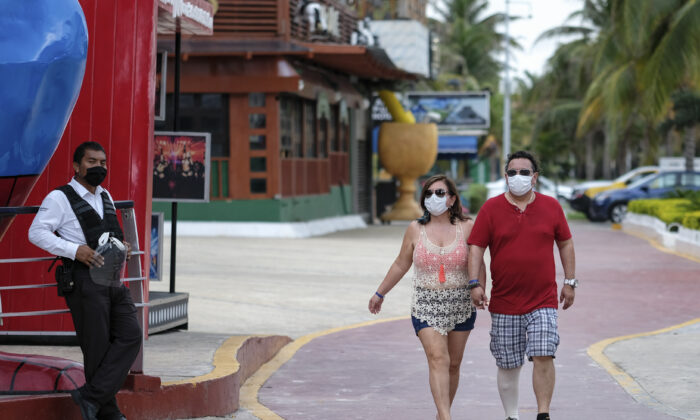 Tourists walk past restaurants and shops along an empty sidewalk in Cancun, Mexico, on June 13, 2020. (Victor Ruiz/AP)
WORLD

Mexico’s deputy health secretary, Dr. Hugo López-Gatell Ramírez, said on Nov. 27 that travel restrictions and border closures in response to the discovery of a new variant of the CCP (Chinese Communist Party) virus are “unhelpful measures” that will affect the economy and well-being of the people.

The B.1.1.529 variant, dubbed Omicron, was first reported to the World Health Organization (WHO) by South Africa on Nov. 24. While the WHO says there’s presently no information to suggest that the symptoms or severity of Omicron will be different from existing CCP virus strains, there are concerns over the number of mutations evident within Omicron, which is currently being studied.

Based on the information available on the risks of the new variant, Ramírez stated that restricting travel and closing borders is disproportionate to what the existing scientific evidence indicates, he said in a statement.

On Nov. 28, the WHO regional director for Africa, Matshidiso Moeti, urged the world to rely on international health regulations and science to avoid using unnecessary travel bans.

The CCP virus, also known as the novel coronavirus, has killed 293,186 people in Mexico as of Nov. 26, according to WHO data. A spike in CCP virus-related mortalities hit the country in January, with 9,737 deaths reported the week of Jan 18.

Contrary to the approach used by many nations, Mexico never shut its tourism sector during the peak of pandemic lockdowns. At present, the nation is entering its high tourism season (December–April), with millions of tourists arriving, including many from the United States. Revenue from foreign tourism generated a hefty $2.22 billion in July.

“It [Omicron variant] has not been shown to be more virulent or to evade the immune response induced by vaccines,” Ramírez said.

Brazilian officials announced the closure of their borders on Nov. 26 to six African countries to curb the spread of the variant. On the same day, Guatemala announced restricted entry for eight African countries. They’re the first Latin American nations to implement country-specific travel restrictions due to the Omicron variant.