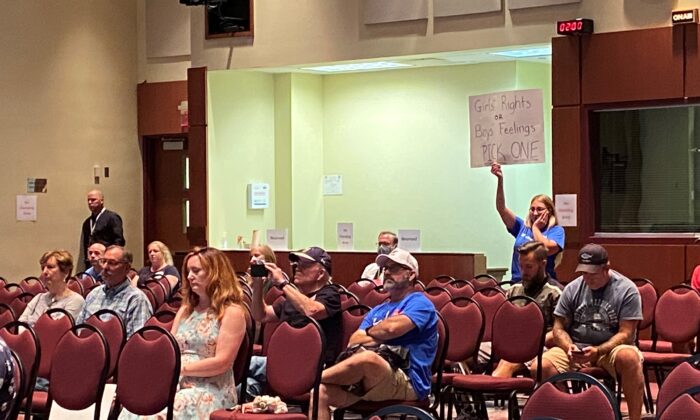 A woman holds a sign as board member Jeff Morse speaks at the Loudoun County Public Schools board meeting in Virginia on Aug. 11, 2021. (Terri Wu/The Epoch Times)
Viewpoints

Some will remember that comedy classic from 1961, “Divorce, Italian Style,” starring Marcello Mastroianni. Unfortunately, 60 years later, we seem to be moving toward, even living through, a far less funny, real-life “Communism, American Style.”

What is “Communism, American Style”? As yet one would think it bears little resemblance to the Soviet kind with its gulags and so forth.

On Oct. 6, the Los Angeles City Council proclaimed, nearly unanimously (11–2), COVID-19 mandates that require proof of vaccination to enter indoor restaurants, movie theaters, salons, shopping centers, and just about every other public indoor space you could think of in the entertainment capital.

Others, with the encouragement of our federal government, will soon be following suit in varying degrees or already have.

Maybe gulags aren’t needed when the entire society is living in one.

This occurred only a couple of days after Merrick Garland, the attorney general of our country—in what Mark Levin described as Stasi-like behavior—announced his jihad, apparently in cahoots with several other governmental education entities, against parents who deigned to criticize school boards for propagandizing their children with critical race theory (son of critical theory, son of Marxism).

Garland called these concerned parents, who are springing up seemingly everywhere, “domestic terrorists.”

It turned out the AG’s own children were, via the “education” company Panorama, profiting mightily off purveying this same inducement of race hatred, while pretending to be an anti-racist, totalitarian so-called theory.

Communism, despite its high-toned, ever-changing, moralistic rhetoric—more precisely thanks to it, when you think about it—is the most evolved system yet for preserving as much money as possible in the hands of elites (translation: communist leadership and their friends).

It’s no accident that Fidel Castro died a billionaire while his people live in squalor. Or that Xi Jinping, the general secretary of the Chinese Communist Party, inhabits the opulent imperial redoubt Jade Spring Hill, partly a UNESCO World Heritage Site. (Take a look. Mar-a-Lago may not have seemed all that impressive to him.)

Power to (some of) the People, indeed.

Nevertheless. China, Russia, and, no doubt, Cuba—had he known much about it—were considered too impoverished by Marx to be fecund opportunities for communism, especially then. Pol Pot’s Cambodia would probably have baffled old Karl.

Marx assumed his system would first come to that more modern industrialized state that was prepared for the transition, Germany.

He was wrong about that (at least until East Germany came along, but that was only due to the intervention of the Soviets. Yes, Nazism had elements of Marxism, too.).

Or was he? Perhaps he was just ahead of his time.

What modern industrialized state could be more fecund for communism than the United States of America, the country with the most-est of all?

And it wouldn’t even require a revolution. It could just walk in the door, especially since so many of its leaders seem ready for it.

Of course, they do not name what is happening communism, or even socialism. That would just create dissension. Often, conveniently, they do not even admit what they are doing, or calling it, to themselves.

But they are doing it. And that is what is important.

Basic to this development is a one-party system, something more like China, which is communist in rhetoric and social control, but capitalist, in greater or lesser extents, economically. Socialism, most intelligent people know, ultimately doesn’t work as an economic system.

There’s nothing new about that. Lenin understood it when he instituted limited capitalism, the New Economic Policy (NEP), only a few years after assuming power.

But the one-party system is still attractive. It obviously can be successful when paired with capitalism of various degrees. The so-called Chinese miracle is an outgrowth of that when millions, largely in the more capitalistic era of Deng Xiaoping, were lifted out of poverty.

Virtually all the Democratic Party and an unfortunate portion of the Republican—the uni-party, as it’s known—believe the Chinese are the way of the future and, as I have said before, have consciously or unconsciously joined up with them in deeds, if not in words.

The premature, surprise lifting of the debt ceiling on Oct. 7 with notable Republican participation was but one example of this growing tendency toward one-party rule. Democracy, especially multi-party democracy, is just too unruly—too 18th Century, too Enlightenment, for the modern high-tech era.

Helping in this transition to crypto-communism, or whatever you would call it, are many in the populace who would rather be led than to think or, more importantly, act for themselves. It’s the part of human nature that makes for good communists. In fact, communism owes its existence to them.

They are the part of America that will allow, indeed are allowing, communism to walk in the door. Among them are some of our richest and most successful citizens, but that does not stop them from being fools.

They aren’t, moreover, the people that built this country. Those who built the country are from the folks who de Tocqueville saw when he wrote “Democracy in America,” the independent, self-starting citizens that formed so many non-governmental, patriotic organizations for the betterment of all.

Those people, thankfully, and here’s the good part, have not gone away. The ideological war is not over. The Fat Lady hasn’t even begun to sing. She hasn’t opened her sheet music.

Garland and his allies made a big mistake in their frontal assault on the parents of America, many of whom were already outraged. Just think how many they are, parents fed up with an already atrocious public school system that served no one and was now being used for indoctrination.

They are forming a literal army across the country. Running for school board is turning into the No. 1 vocation or avocation, depending on the situation, for patriotic, committed Americans.

But something even bigger is happening. And it doesn’t take Outkick’s Clay Travis to see it—although he clearly has and is talking about it daily on his radio show with Buck Sexton.

Football season is here and the country is fed up to an unprecedented degree with their pro-communist leaders for a variety of reasons from the totalitarian COVID mandates to the equally unprecedented national embarrassment of Afghanistan to a mainstream media that has done nothing but lie to them.

And more and more people are showing their displeasure for this state of affairs in football and NASCAR stadiums, in concert halls, and in the streets.

It’s a movement never seen before and it’s growing at an amazing clip. Crowds of Americans are banding together and shouting:

Well, this is a family newspaper, but you know what I mean. “Let’s go Brandon!” is how an NBC reporter translated for her audience the expletive-laced rejection of Joe Biden being shouted by a NASCAR audience.

It’s another way of saying “Bye-bye, communism, good-bye. We love our freedom here.”