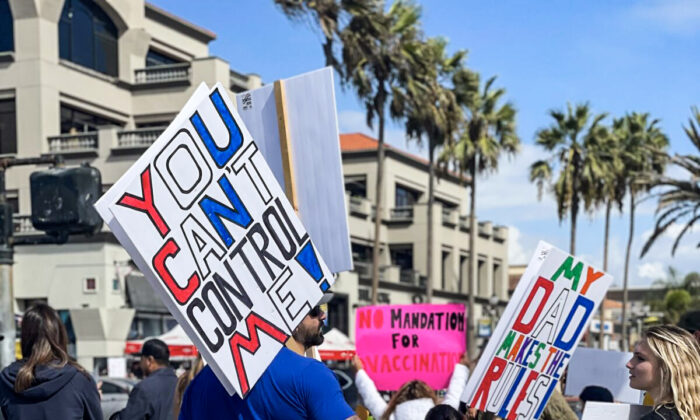 Thousands of California parents, students, and teachers on Monday participated in a statewide walkout to protest Gov. Gavin Newsom’s decision to mandate COVID-19 vaccinations for all students in both public and private schools.

Newsom, a Democrat, earlier this month announced the vaccine mandate for schoolchildren in grades 7 through 12 once the vaccines have received full approval by the Federal Food and Drug Administration (FDA), making California the first state to implement such requirements.

So far, the FDA has only granted emergency authorization for anyone aged 12 to 15. Newsom’s latest vaccine requirement is expected to take effect in January 2022 or the start of the 2022 school year.

Crowds of Californians opposed to the measures swarmed the steps of the California Capitol, carrying signs that read “My body, my choice,” and “My children won’t be a science experiment to make you feel safe.”

Many parents statewide pulled their children from school to participate in the rallies, in hopes their absences from class would send a message to state officials.

One Sacramento mother, Kendall Ramer, 32, told the Associated Press that she pulled her two children out of elementary school to attend a rally, adding that she and her husband plan to shift to homeschooling once Newsom’s vaccine mandate comes into effect.

“Everybody should be able to make their own choice for what’s good for them,” she said.

Los Angeles Unified School District employee Hovik Saponghian told SkyFOX that schoolchildren shouldn’t be forced to “take something without all the data.”

“I’m here protesting the mandate because we don’t believe that we should take it religiously, ethically or morally,” said Saponghian.

Los Angeles Unified School District (LAUSD) parent Rima Mkhitran told the news outlet that she was participating in the rally because “we want our children and our teachers to have a choice.”

“As a parent, I think I have the right with other parents to stand up for our children,” she said.

“I don’t want to get the vaccine for my child because they are too young. There are no studies showing the long-term effects. We should wait for a couple of years,” added LAUSD parent Nara Vardaresyan.

Hundreds of parents and students also gathered at a recent Placentia Yorba Linda Unified School District (PYLUSD) board meeting to voice their opposition to the COVID-19 vaccine mandate.

“This is way too new to be injecting 100 percent of our kids, and we need to have a choice,” Kristen Mortensen of Placentia told The Epoch Times.

“I’m here to stand up for my children’s rights and all kids in our district in our county. They do not deserve to be injected with something that has no long-term studies yet,” added Rick, a father of two students within the district.

Newsom’s plan to mandate COVID-19 vaccinations for schoolchildren has received mixed feedback, with West Virginia Gov. Jim Justice announcing on Oct. 3 that there’s “no chance” he would do the same.

“From the standpoint of mandates, I don’t believe in imposing upon our freedoms, over and over and over. And I’ve said that over, I don’t know how many times I gotta say it,” Justice, a Republican, told CBS’s “Face The Nation.”

“But from the standpoint of our children, I’m going to still encourage in every way, because I truly believe that the more people that we get vaccinated, the less people will die. But at the same time, we still got to stand up for who we are.”