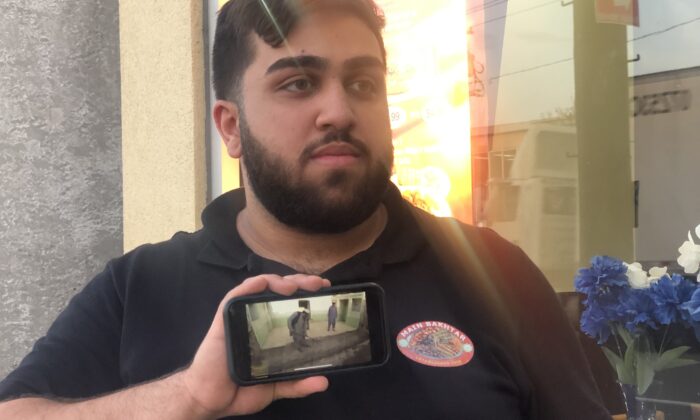 Karim Faizy, manager of Bakhtar Halal Kabab, in Hicksville, Long Island, shows a video of his uncle cleaning up his house after it was bombed in Afghanistan, on Aug. 30, 2021. (Enrico Trigoso/The Epoch Times)
Afghanistan

‘They’re Looking for Them Door to Door’: Afghans in New York React to Taliban Takeover of Afghanistan

With the United States completely withdrawn militarily from Afghanistan since the nation’s involvement after the Sept. 11, 2001 attacks, and with the Taliban terrorist group having seized troves of U.S. weapons, Afghans living in New York hope that by force of miracle, stabilization can come to their home country.

The Epoch Times reached out to members of the Afghan community in New York to get their thoughts on the situation.

Fakhrudin Fakhrudin works in an Indian beauty salon, owned by his wife, who is originally from India.

His family cannot come to the United States, they have told him over the phone that the situation is “very bad.”

“One hundred percent bad. because you can’t find f0od, you can’t find anything. They’re scared of Taliban because they work with the government,” he told The Epoch Times.

His sister’s husband and son worked for the now overthrown Afghan government.

Fakhrudin said that the Taliban are systematically looking for people that worked for the government.

“Now they are looking [for the people who worked for the government] door to door,” Fakhrudin said.

“One girl worked with the police. She’s a neighbor of my sister. They took her eyes off with a knife, twice. The Taliban, I swear to God.”

Fakhrudin has been in the United States for 50 years. He wants to tell the U.S. government as a citizen that the Afghan people need help.

“[Afghan] people need help, they need help very badly because a lot of them worked with the government, and now they are hiding.”

“There’s nothing that we can do, people are just suffering over there,” he concluded.

Karimullah Faizy’s parents were born and grew up in Afghanistan and moved to the United States in the 90s. He runs a restaurant that is owned by his father in Long Island, New York.

“The U.S. government, the way they just left and they left everybody and they left their weapons, just for the Taliban to use it. And now they’re obviously using it against us,” said Faizy.

“Twelve soldiers just died. And it was a very bad decision for [America] just to leave, leave all their Blackhawk Hawk helicopters … And now we just left.”

Faizy’s father is gathering some money to send to his uncle in Afghanistan, whose house was bombed two weeks ago and only half of it remains.

He shared a video with The Epoch Times that shows the ruins of the home.

“They just surrendered, and now the Taliban are taking over the soldiers and using our own equipment. And sooner or later, they’re going to have to go back,” said Faizy.

“People and soldiers dying, and all the money being spent on this … is just very sad and tragic, especially for the people living there, the innocent civilians, and you can see they’re just leaving in helicopters … it’s sad [in] our hearts and we’re praying for them.”

Salimi Popal, originally from Kandahar, Afghanistan, has been living in the United States for 13 years, working 12 hours a day in his food cart in Flushing, Queens.

It was reported recently that the Taliban banned female voices and music from airing on the radio in Kandahar.

His brother, cousin, grandfather, and children all live in the United States. Any extra money he has, he sends to his family in Afghanistan.

He believes in peace and says all the people of Afghanistan are his family, and hopes that the situation can be stable in his home country.

“So bad,” he said, of his family’s situation, “there are no more doctors available.”

Nevertheless, he has hope that things might not go downhill.

“Now it’s too early, because I don’t know what will happen with this new regime,” Popal said.

He emphasized that “maybe,” gradually it would be ok.

“Afghanistan people are not terrorists, they are people like you, like me,” Popal asserted. “Taliban speak the same language, how could I think they are different people.”

“Let’s wait, everybody says ‘wait,'” he said. “Everybody, different countries are waiting to see what will happen—later.”