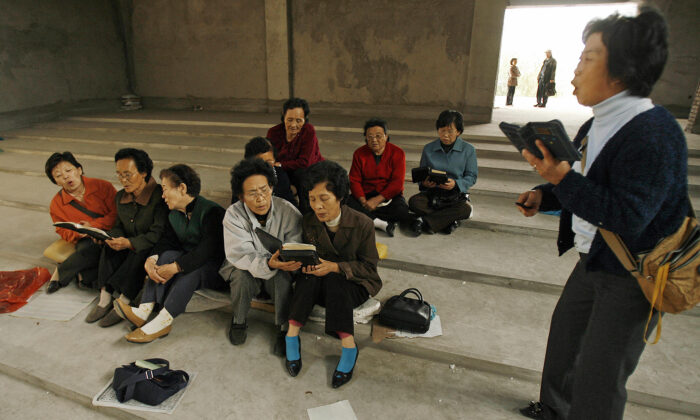 Ethnic Korean Christians sing hymns in their half-finished church in the town of Yanji in Yanbian Korean Autonomous Prefecture on the China/North Korea border on Oct. 13, 2006. (PETER PARKS/AFP via Getty Images)
People

The ‘Most Dangerous Country’ to Be a Christian: North Korea and Its War on Faith

The “hermit kingdom” of North Korea has willfully walled itself into isolation, making it difficult for other free societies to know what is happening inside the secretive state sitting on the east coast of communist China.

It is often through defectors that the world gets glimpses inside a country ruled by a totalitarian regime, including the harrowing accounts of its citizens and people of faith being persecuted.

The Central Committee [of the Korean Workers’ Party] say that Christianity is like opium or drugs and have harshly punished [Christians]. Now that Falun Gong is here, people are watching closely to see how the authorities will respond.
— Anonymous source told Radio Free Asia

North Korea has been ranked number one in the world for persecuting Christians, according to the 2021 World Watch List published by Open Doors, a watchdog organization that supports persecuted Christians. In an interview with an Open Door’s secret worker, the organization called the reclusive communist nation “the most dangerous country in the world to be a Christian.”

It estimated that out of the approximately 400,000 Christians in the country, 50,000 to 70,000 of them are detained in prisons and labor camps, the report said.

Another detailed 2020 research (pdf) by Korea Future Initiative (KFI), a nonprofit that reports on human rights violations in North Korea, documented various accounts of Christians being subjected to horrific persecution while detained or imprisoned over the period of 1990 to 2019.

The KFI report, “Persecuting Faith: Documenting religious freedom violations in North Korea,” is based on 117 interviews of survivors, witnesses, and perpetrators. The investigation also identified 273 victims—ranging in age from 3 years old to over 80 years old—of whom 215 are Christians.

Detainees often face “extreme violence” as a form of punishment for practicing their faith. Apart from physical and sexual assault, routine torture methods include deprivation of food and sleep, being tied up, being beaten while forced to hang on steel bars, being made to do “squat-jumps,” having a red pepper powder solution poured into the nostrils, being forced to eat “polluted food,” and being forced to witness the execution of other detainees, according to the report.

One Christian believer, who was held at North Pyongan Provincial Ministry of State Security (MSS) pre-trial detention center, recounted how “men were beaten like dogs” and they “screamed like crazy” due to the pain.

“Even though women were beaten less, I was hit in the face and my skin ruptured and I bled a lot. [MSS officers] told me to wipe the blood, so I cleaned it … I wept a lot when they hit me again,” the woman said, according to the KFI report.

The report noted that women and girls accounted for almost “60 percent of documented victims” and confirmed 32 incidents of forced abortions and sexual violence.

Citing one incident, a detainee recalled that a pregnant woman gave birth to an alive baby after being forced into an induced abortion, but MSS officials at the North Hamgyong Provincial detention center suffocated the baby using a plastic bag. The report said dead bodies of the aborted infants were usually stored on-site in a closet used for keeping maintenance tools before they were buried. Women weren’t allowed any rest period and were forced to resume labor work the next day after undergoing a forced abortion.

Sexual violence is another commonly employed torture method. The report stated that female detainees are often addressed as “bitches” and are forced to undergo “nude invasive cavity searches of their vaginas and anuses,” even girls as young as 3 years old are not spared from this humiliating physical exam, according to the KFI report.

Often, religious believers and their family members are sentenced together to “political prison camps” after one is found to be practicing faith or in possession of religious items. The report said that these prison terms are “known or understood to be life-sentences.”

In one case, the parent of a soldier was executed for smuggling a Bible from China into North Korea. The soldier was reported to the Border Security Command squadron and later sent to a political prison camp with remaining family members.

According to the report, Christian believers who went to China and came into contact with any local churches or religious practices are often arrested based on the details provided by MSS informants and China’s Ministry of Public Security.

Christians also revealed to investigators how China’s Ministry of Public Security marks refoulement documents “with a black stamp,” which indicates that the victim was involved in practicing Christianity in China.

North Korea, like its communist neighbor China, is also involved in the suppression of Falun Gong, a spiritual discipline that is based on the principles of truthfulness, compassion, and forbearance.

While this peaceful meditation system flourished overseas, with over 100 million people worldwide openly practicing its five gentle exercises, the Chinese communist regime has been persecuting its followers since July 1999. To date, in the 21-year-long persecution, tens of thousands of adherents have been detained, tortured, and killed.

In 2019, Radio Free Asia (RFA) reported that the authorities in Pyongyang, North Korea, began the suppression of Falun Gong after noticing an increase in the number of people practicing it.

“The judicial authorities are struggling because the spread of Falun Gong among citizens of Pyongyang has surged beyond their expectations,” a source told RFA, adding that the police issued proclamations ordering citizens who are practicing Falun Gong to voluntarily report to the authorities or risk “harsh punishments” if caught later.

However, instead of deterring people from practicing Falun Gong, the suppression aroused people’s curiosity, as more people became interested in the practice and it has even spread to “high-ranking government officials and their families.”

“After the proclamation and subsequent crackdown, people are suddenly very interested in Falun Gong, which had already been spreading in [Pyongyang’s] underworld,” the source told RFA.

The report also said that 100 Falun Gong practitioners were arrested in the city in the first round of suppression and many who were arrested would be “sentenced to hard labor or correctional labor depending on the severity of their crimes.”

Another source compared North Korea’s suppression of Falun Gong to “a war on the religion,” reported RFA.

“The Central Committee [of the Korean Workers’ Party] say that Christianity is like opium or drugs and have harshly punished [Christians]. Now that Falun Gong is here, people are watching closely to see how the authorities will respond,” according to the second source.