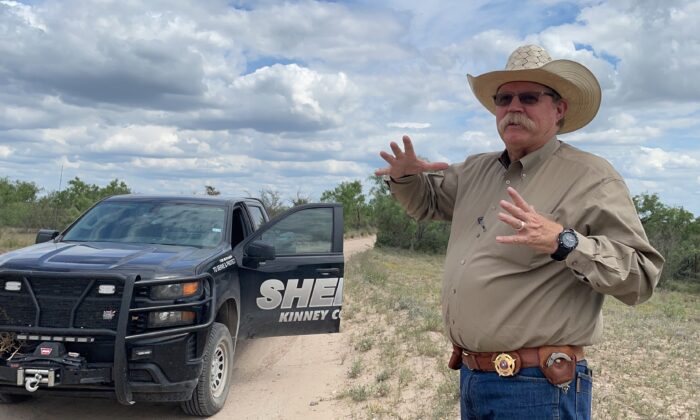 Kinney County Sheriff Brad Coe talks about the impact of the border crisis in his county, in Brackettville, Texas, on May 23, 2021. (Charlotte Cuthbertson/The Epoch Times)
Immigration & Border Security

BRACKETTVILLE, Texas—The tens of thousands of illegal aliens that evade Border Patrol every month—hoping to slip undetected to large cities up north—are now being confronted by sheriffs who are starting to charge them for trespassing, evading arrest on foot, and endangering the life or health of a child.

Seeing no solutions to the border crisis from the federal government, some counties are looking at all possible means to rein in the high-speed vehicle pursuits, trespassing, break-ins, vehicle thefts, and other crimes that are increasing in their communities.

“I’m going to start here, locally. If we catch them, we’re going to start prosecuting these people that are trespassing on y’all’s property,” Kinney County Sheriff Brad Coe told an appreciative crowd in Brackettville, Texas, on May 22. “And whatever other legitimate charge we can stack on there to try to deter them from coming to Kinney County. We’re going to try to hold these people accountable.”

Coe said his county would start charging for trespassing on June 1. He provided ranchers with a form that would authorize the sheriff to file charges on their behalf if someone is caught on their property—saving the rancher from coming into town to press charges every time a trespasser is caught. For many local ranchers, it’s a daily occurrence.

Coe said the sheriff’s office recently filed child endangerment charges against a woman who bailed out of a vehicle that had been pulled over by a deputy. The woman grabbed her 7-year-old child and ran into the scrub without food or water. The deputy caught her and the child and then called the sheriff to ask what she should do with them.

“And I said, ‘Now’s the time to start,'” Coe told The Epoch Times. “Let’s file charges against her for child endangerment based on the fact that she ran out of the car, she had no bags, no nothing with her, no food, no water for that kid, 7 years old. You’ve seen the weather down here, some days it’s 90 degrees, 110 degrees. What was she planning on doing with that child in the brush with no food and no water?”

The woman and child were turned over to Border Patrol, while the sheriff’s office will present the child endangerment case to a grand jury to decide if it’s a valid case for prosecution, known as a true bill.

“If they ‘true bill’ it, then we’ll put a warrant out for her arrest, and wherever she turns up, we’ll go get her and bring her back,” Coe said.

“If we do arrest her, and she gets sentenced to a year or six months, whatever the case may be, if she ever tries to file for some type of assistance here, or become a citizen … that’d be a check mark against her.

“Some type of consequence has to be there.”

‘We’re Hoping They Avoid Our County’

Border Patrol detects a daily average of around 1,000 illegal aliens who evade capture along the southern border. The number of those who pass undetected is impossible to estimate.

Most of the illegal aliens passing through Kinney County are adult males who have crossed the border in the Del Rio Border Patrol Sector—usually into the small cities of Del Rio or Eagle Pass.

The sector is experiencing record-breaking numbers, and so far in the current fiscal year (which began on Oct. 1, 2020), Border Patrol has apprehended illegal aliens from 70 countries, according to information obtained by The Epoch Times.

Kinney County Attorney Brent Smith is preparing to take up a slew of new trespass cases, while the district attorney deals with the felonies, such as human smuggling.

After an illegal alien is arrested for trespassing, Smith will examine the evidence in the case file from the sheriff’s office. If it’s determined that trespass occurred, he’ll charge the individual with trespassing, which is a Class B misdemeanor. The charge is elevated if the individual has a deadly weapon or is found more than 100 feet past the property line on agricultural land.

Once charged, the suspect will make a plea, and if they plead guilty, they’ll most likely be released with time served (two to three days) and be turned over to Border Patrol.

It’s not a big penalty, but Coe and Smith say it gets illegal aliens into the system and gives them a record.

“We’re trying to make sure they’re held accountable for breaking the laws in our state and our nation. And so, if [President Joe] Biden is not going to enforce the law, then we’re going to try to enforce our own state laws.”

On April 21, Kinney County declared a local disaster due to the impact of the border surge, saying in its declaration that the “health, life, and property” of its residents are “under imminent threat of disaster from the human trafficking occurring on our border with Mexico.”

More than two dozen counties have since also made disaster declarations or are in the process of it.

Smith said Texas should act on its own to enforce its border with Mexico.

“It is my opinion that an emergency declaration by Governor [Greg] Abbott or the Texas Legislature would authorize Texas to take certain steps in the enforcement of its own borders and the protection of its citizens’ health, safety, and welfare,” he wrote in an open letter in April.