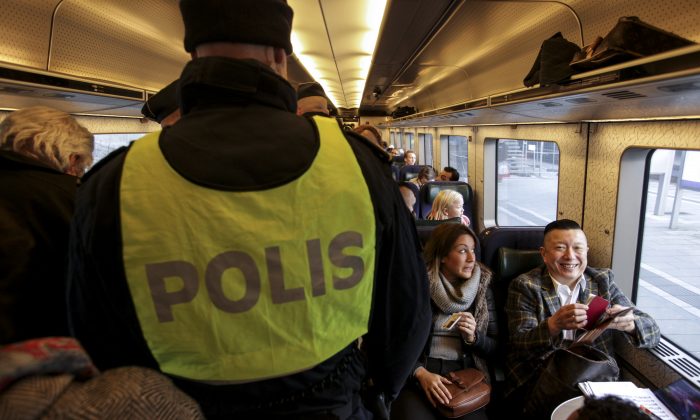 Swedish police officers on the train from Copenhagen in Malmo, Sweden, on Nov. 12, 2015. (Stig Ake Jonsson/TT via AP)
WORLD

Sweden Bans Travelers From Israel, One of the Most Vaccinated Nations

Sweden became the second European Union country to ban Israeli residents from entry due to a rise in COVID-19 cases in Israel, despite the country being one of the most vaccinated countries in the world.

Portugal on Wednesday became the first EU country to ban travel from Israel due to a rise in cases. Both countries are following the EU’s recommendation to remove Israel from its list of green countries.

Interior Minister Mikael Damberg told news outlets that the sharp increases in COVID-19 cases in Israel, the United States, and other countries are the reason why they were removed from Sweden’s travel ban exemption. Despite Israel’s mass vaccination campaign, the virus has continued to spread, Damberg said.

According to a news release from the Swedish government, it will reintroduce a travel ban on Israel, the U.S., and other countries starting from Sept. 6.

“Regarding foreign citizens travelling to Sweden from the US, Israel, Kosovo, Lebanon, Montenegro, and North Macedonia as of 6 September, only those covered by another exemption from the entry ban may enter Sweden,” said the release. “This could concern foreign citizens who have residence permits in Sweden, have particularly urgent needs or are to carry out essential functions, and who can also present a negative COVID-19 test. The negative COVID-19 test result may not be older than 48 hours. This requirement applies to foreign citizens aged 18 and older, with certain exemptions.”

The Swedish government said it is following the EU’s guidelines on removing those countries from its safe travel list, and it said the directive will be revisited at a later date.

“Unfortunately, following the EU’s directive, according to which it was decided to remove Israel from the list of green countries, the Portuguese government aligned itself with [the EU’s recommendation] which prohibits entry from Israel to Portugal except for justified reasons,”  Itay Mor, the head of Zionist NGO Over The Rainbow Portugal, told YNET.

Interior Minister Mikael Damberg cited the sharp increases in coronavirus infections as the reason the countries were removed from the travel ban exemption, saying that despite Israel’s successful vaccination campaign, the country is still home to large groups of unvaccinated people that have allowed the outbreak to spread.

“We are troubled by this decision, all the more so because most Israelis have been vaccinated. At this stage, the EU should have recognized Israel’s vaccination certificates,” Mor added.

On Aug. 30, the European Union removed the United States, Israel, Kosovo, Lebanon, Montenegro, North Macedonia, and others from its safe travel list. The list is nonbinding and countries are free to determine their own border policies.

Meanwhile, Israel over the weekend announced that individuals who have not received a third booster vaccine shot will not be able to use their vaccine passports.

Even though Israel is one of the most vaccinated countries on Earth against COVID-19, cases are rising. The small nation’s seven-day average for COVID-19 infections on Monday was over 1,000 per one million people, which is double the rate of numbers seen in the United States and the United Kingdom, according to Oxford University’s Our World in Data.