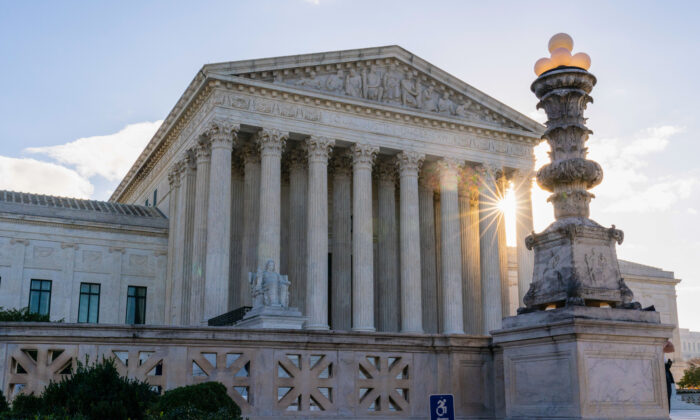 The Supreme Court decided on Oct. 29 to hear two cases that the Biden administration didn’t want to come before the court—one aimed at reviving a rule that screens out potentially government-dependent immigrants and another that could roll back the reach of the Environmental Protection Agency (EPA).

The court’s decisions come as migrants continue to illegally cross the U.S. southern border and the Biden administration develops a strategy for dealing with climate change. The decisions also come as the court prepares to hear high-profile cases in the coming days dealing with a Texas law strictly regulating abortions and a New York law that strictly regulates gun use.

“When other federal officials won’t defend the law, I will,” Brnovich said in a statement. “The Public Charge Rule is a commonsense policy based on a real inconvenient truth. Overrunning our welfare programs right now would be like pulling back the last safety net for Americans who need it most.”

In the case, the Republican attorneys general of Arizona and 12 other states are asking the high court to be allowed to defend in court a Trump-era rule designed to screen out would-be immigrants unable to support themselves. Enforcing the immigrant self-sufficiency rule could save states billions of dollars each year.

A federal appeals court struck down the public charge rule and the Biden administration refused to defend it in court. Separately, President Joe Biden has also rescinded the rule. Among the respondents in the case are the U.S. government and the states of California, Illinois, Massachusetts, and New Jersey.

Arizona and the 12 other states accused the governments on the other side of colluding to prevent this important case from being heard by the Supreme Court.

“Without any prior warning, the existing parties sprung an unprecedented, coordinated, and multi-court gambit,” Arizona and other states said in their petition (pdf). “Through it, they attempted to execute simultaneous, strategic surrenders in all pending appeals involving the Rule. That included the Second Circuit appeal that this Court had already agreed to hear, as well as the pending petitions for writs of certiorari in this case and the Seventh Circuit case.”

Over vehement opposition, the Trump administration breathed new life into the rule, which had fallen into disuse. Although critics say that the extensively litigated pro-taxpayer rule is xenophobic and discriminates against poor aliens, the public-charge principle—the idea that immigrants should have to prove that they can survive without becoming wards of the government—has been part of the American experience for centuries.

The Supreme Court also decided to hear West Virginia v. EPA, which it consolidated with three other appeals.

Energy-producing states and coal companies are accusing the EPA of a power grab, claiming that it has exceeded its authority to limit carbon emissions, which environmentalists allege contribute to climate change. A ruling in 2020 by the U.S. Court of Appeals for the District of Columbia Circuit gave back to the EPA some of the authority the Trump administration had taken away from it.

According to petitioners, the appeals court “held that a rarely used, ancillary provision of the Clean Air Act grants an agency unbridled power—functionally ‘no limits’—to decide whether and how to decarbonize almost any sector of the economy,” the petition (pdf) reads.

Five years ago, the EPA “claimed to find similar powers in the same provision—authority to reshape the nation’s utility power sector by mandating standards impossible for coal and natural gas power plants to meet without limiting operations, shutting down, or subsidizing investment in alternate electricity generation that EPA preferred.”

The Supreme Court “took the extraordinary step of staying EPA’s ‘Clean Power Plan’ rule even before the lower court finished its review, strongly signaling that EPA (and by extension the court below) were wrong.”

The agency repealed the rule in 2019, but the appeals court “insisted that EPA had more statutory power than the agency had originally claimed,” and gave it “new and wildly expansive authority.”

The agency now “can set standards on a regional or even national level, forcing dramatic changes in how and where electricity is produced, as well as transforming any other sector of the economy where stationary sources emit greenhouse gases. Power to regulate factories, hospitals, hotels, and even homes would have tremendous costs and consequences for all Americans.”

“This is a tremendous victory for West Virginia and our nation,” Morrisey said in a statement.

The decision “indicates a significant portion of the court realizes the seriousness of this case and shares our concern that the D.C. Circuit granted EPA too much authority.”