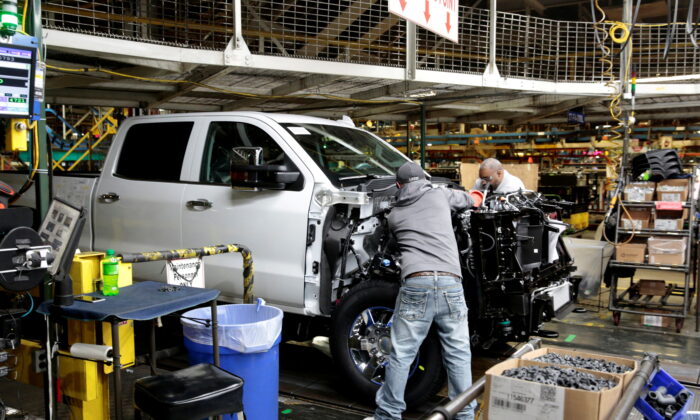 Automakers in North America plan to build more pickup trucks and sport utility vehicles than electric vehicles well into the late 2020s, with strong consumer demand for gasoline-powered vehicles charting sales trends that run counter to the Biden administration’s goal of boosting electric vehicles (EVs) to half the market by 2030, according to internal production forecasts reported on by Reuters.

President Joe Biden signed an executive order earlier in August establishing the goal of making half of all new vehicles sold in the United States either hybrid or fully electric by 2030. Biden’s order also set a new schedule for the development of new long-term fuel efficiency and emissions standards to tackle pollution and other objectives.

General Motors, Ford, and Chrysler-parent Stellantis have endorsed Biden’s zero-emissions sales target, saying in a joint statement on Aug. 5 that they aspired “to achieve sales of 40-50 percent of annual U.S. volumes of electric vehicles … by 2030,” adding that the goal can only be met with more government investment in charging stations and other infrastructure. Biden’s 50 percent goal and the automakers’ 40 to 50 percent aspiration includes battery electric, fuel cell, and plug-in hybrid vehicles that also have gasoline engines.

“Far more demand for electric vehicles will be needed in order to hit the 2030 goal of 40-50%,” Fiorani told the outlet, adding that he expects many buyers will be reluctant to make the switch to electric.

About four in 10 Americans (39 percent) told Pew Research pollsters in June that the next time they buy a vehicle, they are at least somewhat likely to seriously consider going electric, while 46 percent said they aren’t too likely—or at all likely—to do so. At the same time, 51 percent said they oppose proposals to phase out production of gasoline-powered vehicles, while 47 percent expressed support.

According to Pew, just 7 percent of U.S. adults said they currently have an electric or hybrid vehicle, with 28 percent of them telling pollsters that they are unlikely to consider an electric car or truck next time around.

Automakers sticking to the production plans outlined by AutoForecast would mean EVs would account for just 15 percent of total North American production in 2028, with plug-in hybrids representing another 3.4 percent. For automakers to meet Biden’s goal under such circumstances, they would have to more than double EV and PHEV production within two years between 2028 and 2030.

Still, Ford told Reuters that it expects battery-electric vehicles to account for at least 40 percent of global volume by 2030, GM told the outlet it hopes to achieve the 40 to 50 percent target, and Stellantis said it doesn’t comment on speculation regarding future products.

“Encouraging EV adoption while we still rely on China for batteries risks granting Beijing a lot of leverage,” she said.