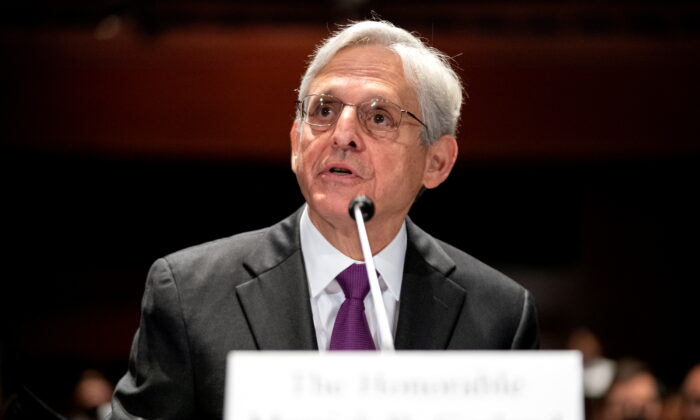 Newly publicized documents revealed more details about how the National School Boards Association (NSBA) communicated with the White House before sending out a letter likening concerned parents to domestic terrorists.

In the widely criticized Sept. 29 letter to President Joe Biden, the NSBA characterized disruptions at school board meetings across the nation as “a form of domestic terrorism and hate crime.” It also urged the federal government to invoke counter-terrorism laws to handle “angry mobs” of parents seeking to hold school officials accountable for teaching the Marxist-inspired critical race theory and for imposing COVID-19 restrictions such as mask mandates on their children.

Just five days later, Attorney General Merrick Garland issued a memo directing federal law enforcement to help address the alleged “disturbing spike in harassment, intimidation, and threats of violence” against teachers and school leaders. Garland’s rather swift response has raised suspicions among some Republican members of Congress, who are looking into the role the Biden administration played in the crafting and release of the NSBA letter.

According to a timeline provided in an Oct. 12 memo (pdf) sent from NSBA President Viola Garcia to state association officers and executive directors, the organization has been interacting with White House staff regarding the alleged threats of violence since as early as mid-September.

“In the September 14, 2021 meeting of the [NSBA Organization of State Association Executive Directors] liaison group, they were informed there had been a meeting with White House staff that morning and that NSBA was preparing to send a letter to the President,” read the memo obtained by advocacy group Parents Defending Education via a Freedom of Information Act request.

The memo includes excerpts of a Sept. 17 email notice by NSBA Interim Executive Director and CEO Chip Slaven, which stated that “NSBA is taking a number of actions regarding calling for protection and resources to assist school board members with these threats including a call for the President and federal government for more assistance.”

Garcia, who was recently awarded by the Biden administration with a position on a federal board overseeing standardized tests, also appeared to take credit for the Oct. 4 memo, describing it as the U.S. Department of Justice’s response to the NSBA letter.

When Rep. Jim Jordan (R-Ohio) asked Garland during an Oct. 21 House Judiciary Committee hearing whether it was just a coincidence that the NSBA letter and the DOJ memo were released only five days apart, he admitted the letter was “brought to our attention” and was a “relevant factor” in his memo.

Garland further stated that he didn’t know whether anyone else in his department spoke with the White House prior to the memo’s release, but was sure that “the communication from the [NSBA] was discussed between the White House and the Justice Department, and that’s perfectly appropriate.”

The DOJ and the White House did not respond to a request for comment.

Even after the NSBA apologized for the language it used in the letter, many state school boards chose to distance themselves from the national federation, citing disagreements with the “domestic terrorism” letter or the DOJ memo or both. As of Nov. 12, twelve state chapters—Alabama, Florida, Kentucky, Louisiana, Missouri, Montana, New Hampshire, North Carolina, Ohio, Pennsylvania, South Carolina, and Wisconsin—have announced they either left or are leaving the NSBA.