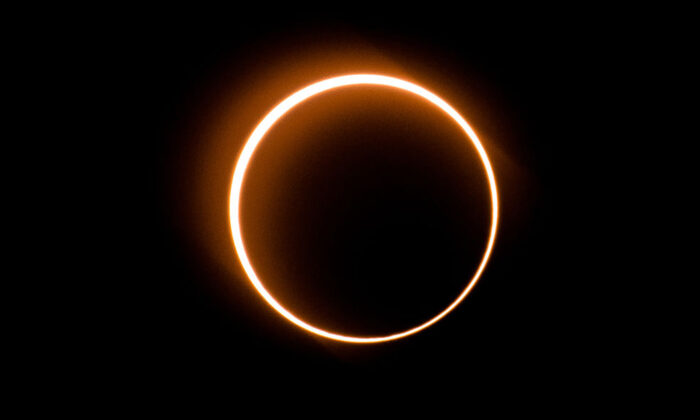 ‘Ring of Fire’ Solar Eclipse to Appear in the Sky Next Month—Here’s What You Need to Know:

A “ring of fire” eclipse will occur next month over Canada and its environs; and will be visible from the remote areas of north Ontario, Russia, Greenland, and Polar Bear Provincial Park (located on the southwestern shore of Hudson Bay).

During a solar eclipse, while passing directly across the Sun’s center, a smaller Moon (at its furthest positions from the Earth along its elliptical orbit) is what allows this phenomenon to happen.

The full eclipse (with the ring of fire) will be visible in some locations at 5:49 a.m. Eastern time, lasting only 3 minutes and 51 seconds; while a partial eclipse will begin from 4:12 a.m., lasting until 9:11. a.m. Times vary depending on location.

Polar Bear Provincial Park is currently closed; those hoping to view the ring of fire from that point may have to scout for another vantage point.

Due to Canada’s closed borders due to the pandemic and its unpredictable weather prospects, would-be visitors from south of the border or elsewhere may have to find other viewing accommodations.

Americans hoping to catch the sight can book a seat aboard Sky and Telescope magazine’s special chartered flight, destined to view the eclipse from aloft. The plane departs from Minneapolis-St. Paul airport the day of the event, returning three hours later.

“What makes this flight viable—and attractive—is that it occurs near the horizon just after sunrise,” Kelly Beatty, senior editor at Sky and Telescope, told Forbes.

“So, it will be easy to view out the plane’s windows. The sun is going to be just above the horizon, so that should make for some dramatic wider-angle photography.”

Not since 1951 has anyone chartered such a large plane to capture the unfolding of an annular eclipse.

As consolation to those unable to see the ring of fire, people in the northeast U.S., and across eastern Canada, will have the advantage of clear skies to observe an enormous, partially eclipsed “crescent Sun” appearing on the horizon shortly after sunrise.

The eclipse will be challenging to view for those in more distant regions.

It’s important to wear solar eclipse glasses, or implement other safety measures, to protect your eyes whenever viewing an eclipse.

If you’re lucky enough to be in the right place, mark your calendar, and be sure to set your alarm to rise early and witness this rare, spectacular celestial event.

Note: A previous version of this article incorrectly stated what would be visible during the annular eclipse. The outer edge of the sun’s disk will be visible. The Epoch Times regrets the error.