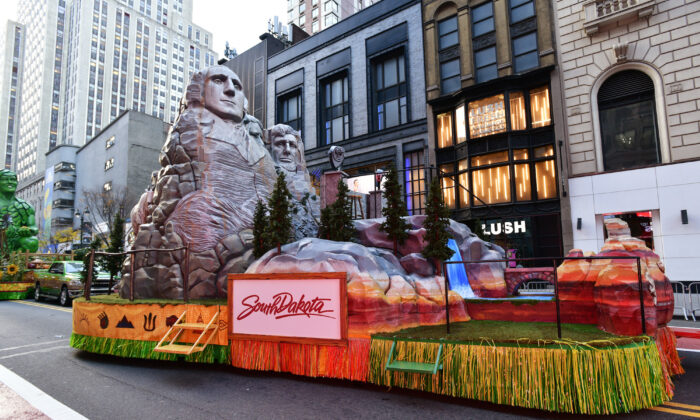 File photo of the South Dakota float at the Macy’s Thanksgiving parade in New York, on Nov. 24, 2020. South Dakota topped the charts in 2020:Q4 quarterly annualized GDP growth and had the lowest unemployment rate in February 2021. (Eugene Gologursky/Getty Images for Macy's, Inc.)
Economy

Red States Lead the Way in Economic Recovery and Employment

The top three states in quarter-over-quarter growth, South Dakota (9.9 percent), Texas (7.5 percent), and Utah (7.1 percent) are under Republican trifectas, with GOP control of both state legislative chambers and the governorships.

“The Texas economy is on 🔥🔥🔥” the Lone Star state’s Republican governor Gregg Abbott announced on Twitter. “That means more jobs & more prosperity for Texans,” he added.

Kim Reynolds, the GOP governor of Iowa (6.3 percent), took to social media in a similar vein, calling Iowa “the #1 state for opportunity” and reinforcing its reluctance to lock down: “Had kids back in school since August.”

Democrat strongholds Connecticut (7.0 percent) and Delaware (5.8 percent) were the only blue-led states in the top 10.

Meanwhile, on March 26, the New York Federal Reserve’s so-called “GDP Nowcast” model, which estimates real-time economic growth, predicted that the U.S. economy grew at 6.1 percent in the first quarter of 2021 and will grow at just 0.7 percent in the second quarter. The figures represent a decrease in first quarter estimates by 0.2 percentage points and in second quarter estimates by 0.5 percentage points.

Following the deep downturn as the pandemic sent the economy into a tailspin, economists widely expect GDP to sail higher in the current January-March quarter to 5 percent or higher. They are forecasting growth for the entire year of around 6 percent or even higher, which would the strongest performance since a 7.2 percent GDP gain in 1984 when the economy was coming out of a deep recession.

A separate report from the U.S. Bureau of Labor Statistics (pdf) showed that unemployment rates were lower in February in 23 states and the District of Columbia, higher in 4 states, and stable in 23 states, while the the national unemployment rate remained little changed over the month at 6.2 percent.

Louisiana, with a jobless rate of 7.6 percent, was the only red state among the top 10 states with the highest unemployment rates in February.

Democrat-led Vermont (3.1 percent) was the only blue state in the top 10 states with the lowest rates of joblessness.