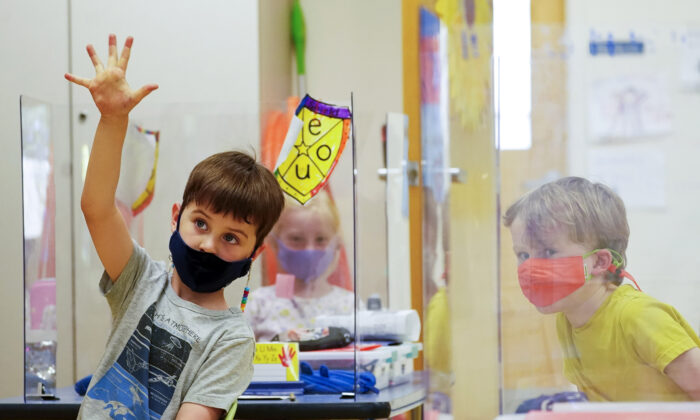 Kindergarten students attend a math lesson at the Milton Elementary School, in Rye, N.Y., on May 18, 2021. (Mary Altaffer, File/AP Photo)
US News

Public school enrollment in 2020–2021 fell by 3 percent nationally compared to a year earlier, according to preliminary data from the U.S. Department of Education’s National Center for Education Statistics (NCES), with pre-K and kindergarten jointly seeing a sharp 13 percent drop.

The stark numbers represent the largest year-over-year decline in enrollment since the start of the century, with the drop concentrated among the youngest learners, the NCES figures show.

Pre-K saw a 22 percent decrease, kindergarten enrollment fell by 9 percent, grades 1–8 experienced a 3-percent drop, and grades 9–12 saw enrollment rise by 0.4 percent. The figures are preliminary, with the final results expected to come next spring.

NCES Acting Commissioner Peggy Carr said in a statement cited by K–12 Dive that the figures are “preliminary but concerning,” noting that the enrollment drops were “widespread and affected almost every single state and every region of the country.”

The agency’s enrollment figures reinforce the view that disruptions to in-person learning related to the COVID-19 pandemic drove many families to switch to private schools or homeschooling.

With the pandemic increasingly showing signs of tailing off, school districts across the United States are hiring additional teachers in anticipation of what is expected to be one of the largest kindergarten classes ever as enrollment rebounds.

Robin Lake, an education researcher and director of the nonpartisan think tank Center on Reinventing Public Education, told K–12 Drive that surveys indicate that school districts can expect a “flood of young kids” next fall, posing a logistical challenge as they plan funding, staffing, and space.

Educators are also bracing for many students to be less academically prepared than usual, due to lower preschool attendance rates.

“The job of the kindergarten teacher just got a lot harder,” said Steven Barnett, senior co-director of the National Institute for Early Education Research at Rutgers University.

Barnett co-authored a report that found that the number of 4-year-olds participating in preschool fell from 71 percent before the pandemic to 54 percent during the pandemic.

Kindergarten isn’t required in most states, and in normal times, parents sometimes “red-shirt” children who would be young for their kindergarten class to give them an extra year of developmental readiness. This year, even children nowhere near the cutoff age were held out of school because of health concerns and pandemic-related disruptions.

Among them was the daughter of Christina Neu, who works in retail in Wichita, Kansas. Neu held her daughter back, even though she has a December birthday and already would be relatively old for her class because the entry cutoff is the end of August.

“There was a little bit of fear, not wanting her to have to deal with kind of an unknown there,” Neu said, noting that her eldest daughter, who is 8 years old, had just been diagnosed before the pandemic with 26 different food allergies, and her immune system already was in overdrive. “We wanted to make sure that, as a family, we were being smart and being safe.”

School districts are taking a range of approaches to prepare for the expected flood of young learners.

In Orange County, Florida, there are estimates that the incoming kindergarten class will be 17 percent larger than in fall 2020, and officials are planning a five-and-a-half-week transition program this summer at some of its neediest schools.

In Minnesota, the St. Paul district is anticipating nearly 22 percent more kindergartners than in fall 2020. The district plans to do testing over the summer to identify any special needs that have been missed, such as vision problems and speech delays, said Lori Erickson, a veteran kindergarten teacher who now coordinates the district’s pre-kindergarten program.

Still, it remains uncertain just how large kindergarten classes will be in the fall. The increase could be offset by parents who decide to wait an extra year to send 5-year-olds to kindergarten or opt for homeschooling because of safety concerns.

Regardless, education leaders say they expect to be addressing the effects of the pandemic for years.