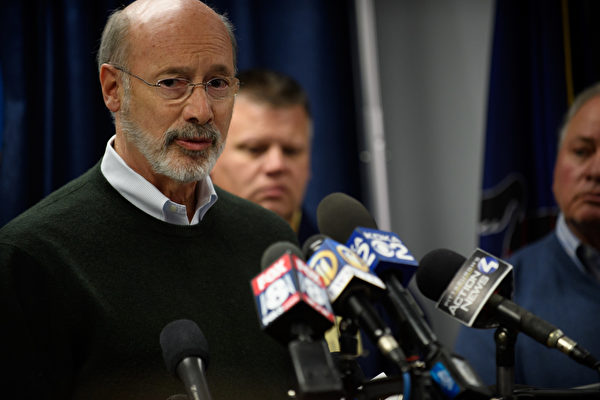 Pennsylvania voted to amend its Constitution on May 18 in response to their governor’s use of emergency declarations to decide laws during the pandemic. As more than two million Pennsylvanians voted in a primary election, they passed two constitutional amendments in ballot questions to restrict the governor’s emergency declaration powers to give some power back to the legislature.

Pennsylvania Speaker of the House Brian Cutler told The Epoch Times that he is glad people voted and had their voice heard. “Ultimately, our Constitution is clear. The people are the ones who are sovereign and give government the power. And I think we saw that result yesterday on the elections,” he said.

The first proposed constitutional amendment, called the Legislative Resolution to Extend or Terminate Emergency Declaration Amendment, sought to allow the Pennsylvania General Assembly to pass a resolution to extend or terminate the governor’s emergency declaration by a simple majority that cannot be vetoed by the governor.

His veto then withstood a legislative challenge that failed to secure the two-thirds majority vote needed to end governor’s disaster declarations.

The May 18 amendment passed with 52.97 percent support from Pennsylvanians.

The second amendment, the Emergency Declaration Amendment, proposed limiting the governor’s emergency declarations to a 21 day period unless the legislature votes on a concurrent resolution to extend the order and passes laws related to how disaster emergencies must be managed.

This amendment also passed on May 18 with 52.93 percent support from Pennsylvanians. Before the vote, emergency declarations could be issued for up to 90 days and extended without limit.

On May 19, Pennsylvania Speaker of the House Bryan Cutler (R) and House Majority Leader Kerry Benninghoff (R) issued a joint statement on Pennsylvania voters’ decision to approve the amendments to the Pennsylvania Constitution limiting the governor’s powers.

“The people of Pennsylvania have exercised their vote and resoundingly reaffirmed their desire for a government with strong checks and balances that works in their interests and not for its own power. In doing so, they have rejected the mutation of emergency authority into unilateral, one-person control that seeks expediency over the rule of law,” the statement read. “To those contemplating litigation to stop the enforcement of the emergency disaster-related amendments: Think twice before again ignoring the voice of the people.”

They expressed that voters have said through their ballot that they do not want to see emergency orders being controlled by the governor alone.

Cutler pointed out that the emergency declarations issued by the governor over the past year have caused many problems.

“There was a list of what they call essential businesses. It was very arbitrary. Some businesses were allowed to be open while their other competitors were not. And there was a lot of confusion with the government waiver program that was put up. I think everybody would agree that it did not work. They made simple mistakes, like they said, coal plants could be open to generate electricity, I think we all agree electricity is required. But the problem was they didn’t let the coal mines continue to operate. So at some point, we were going to run out of coal.

“Same thing in the paper industry,” he said. “They said that paper was essential when everybody ran out to buy toilet paper and there was the shortage. The timber companies couldn’t continue to operate to process trees. So not having that input from the legislators in front of the citizens, I think, severely impacted the early management of the pandemic.”

As a legislator, Cutler said he understood that voters were very frustrated with the emergency declarations: “We tried several things, we tried the taskforce bill, which was vetoed. We tried some specific bills that would open businesses. Those were also vetoed. We also went to court multiple times, citizens went to court. And we lost in the judicial branches.”

Wolf had expressed his opposition to two constitutional amendments, and signed a renewal of COVID-19 Disaster Declaration to Aid in Recovery on May 20.

Cutler said that Republican leaders had called the governor on May 19 to discuss future collaboration under the new constitutional amendments, while waiting for the votes to be certified.

“Anything beyond 21 days would require the input of the legislature. The legislature can approve, disapprove, modify it,” he said of the amendments, adding that the legislature does not want to abruptly stop all emergency declaration in the next three weeks. They will now take time to figure out what to keep.

He said that about 45 state lawmakers in the United States are considering different ways to restrict the power of governors.