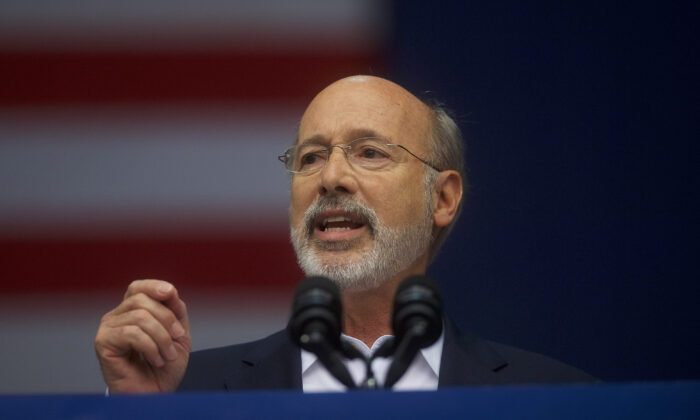 Pennsylvania Gov. Tom Wolf vetoed a Republican-backed election overhaul bill that would expand voter identification requirements, move up the voter registration deadline, limit the use of drop-boxes, and allow county officials to conduct early pre-canvassing for mail-in ballots, among other measures.

In explaining why he vetoed the bill, the Democrat governor wrote that he “made it clear I wouldn’t sign a bill that creates barriers to voting,” adding “that’s exactly what this bill does by: Limiting mail ballots, Capping early voting, Cutting voter registration time.”

On Wednesday, Wolf also used his line-item veto authority to remove a budget legislation proposal that would earmark millions of dollars to create an election-auditing agency.

Wolf separately wrote in his veto letter that he wants to work on legislation that can be passed on a bipartisan basis later this year.

The election measure, known as the Voting Rights Protection Act, passed in the GOP-held state Senate by a vote of 29 to 21, falling short of the two-thirds majority to override Wolf’s veto.

Pennsylvania state Rep. Seth Grove, a Republican who chairs the House State Government Committee, on Wednesday accused Wolf of failing voters and asserted that provisions within the bill are supported by most Pennsylvanians.

“To say I am disappointed in Wolf’s lack of action is an understatement,” Grove said in a statement to media outlets. “Though Wolf has put on blinders to problems within our election process, it doesn’t mean the problems do not exist.”

“Voter ID requirements are a common-sense first step to protecting our elections. They are supported by 74 percent of Pennsylvania voters,” the group’s director, Jessica Anderson, said Wednesday.

The bill is also one of several efforts by Republican-controlled legislatures to shore up what they say are lax laws and enforcement around elections. They’ve also argued that such bills are needed to restore public trust in elections.