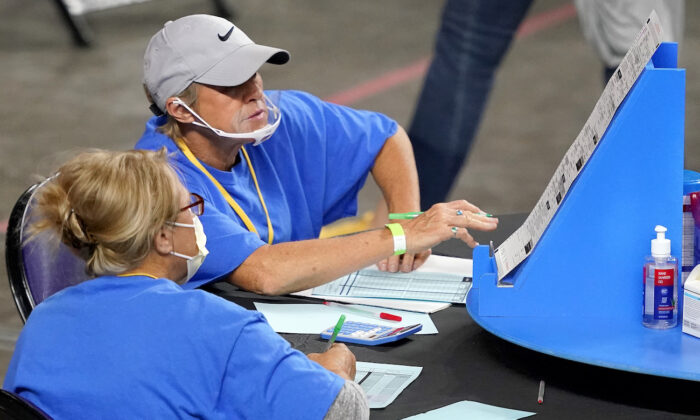 Ballots cast in the 2020 general election are examined and recounted by contractors working for Florida-based company, Cyber Ninjas, at Veterans Memorial Coliseum in Phoenix, Ariz., on May 6, 2021. (Matt York/Pool/AP Photo)
Regional News

At least one of three counties targeted for a forensic investigation of Pennsylvania’s 2020 presidential election has said it will not allow access to its voting machines.

Pennsylvania Sen. Doug Mastriano, chair of the Intergovernmental Operations Committee, sent letters to election officials in three Pennsylvania counties, Philadelphia, York, and Tioga, requesting access to voting machines and information to be used as evidence in a forensic analysis of the 2020 election.

Tioga County Commissioners decided not to provide access after receiving a directive from the Pennsylvania Department of State ordering county boards of elections not to provide any access to third parties seeking to examine the systems or system components.

It further warned that if counties do allow access, the voting equipment will be considered no longer secure or reliable to use in future elections. The department would decertify the expensive election equipment and counties would have to buy new voting machines on their own.

“We’ve been given the directive that we cannot give access or they will decertify our machines,” Tioga County Solicitor Christopher Gabriel told the Epoch Times. “The state did two audits after the election. Nothing of significance was found.”

York and Philadelphia counties have not made their intentions public yet; each county has until July 31 to respond in writing to the request for access.

“The Intergovernmental Operations Committee has not received a formal written response indicating refusal to comply from any of the three counties who received letters from the committee,” Mastriano said Thursday in a written response to the Epoch Times. “We intend to move forward with our plan to investigate these counties.”

“We do have grave concerns that the Wolf Administration is continuing to weaponize the State Department just like they did in 2020. In this case, the department is being used to intimidate county officials and obstruct a Senate-led forensic investigation of the 2020 and 2021 elections,” Mastriano said. “This threat, disguised as a directive to all counties in Pennsylvania, is an attack on the autonomy of local officials and the General Assembly’s power to review, investigate, and legislate in matters within its legislative authority, which includes Pennsylvania’s election system. The Legislature has clear authority—both statutorily and constitutionally—to provide oversight and issue subpoenas.”

Mastriano again questioned the authority of the Department of State to enforce such directive through the acting secretary, Veronica Degraffenreid, who has yet to go before the Senate to be officially confirmed.

Pennsylvania Democratic Attorney General Josh Shapiro said in a tweet that the effort is not a real audit, but a pet project of one man.

“If this state senator goes forward and issues a legal subpoena, that would be litigated,” Shapiro said in a media interview. “I’m confident we would win the litigation, protect the will of the people and protect the taxpayers of Pennsylvania, who at the end of the day, would not only suffer privacy loss, but millions of dollars in cost.”