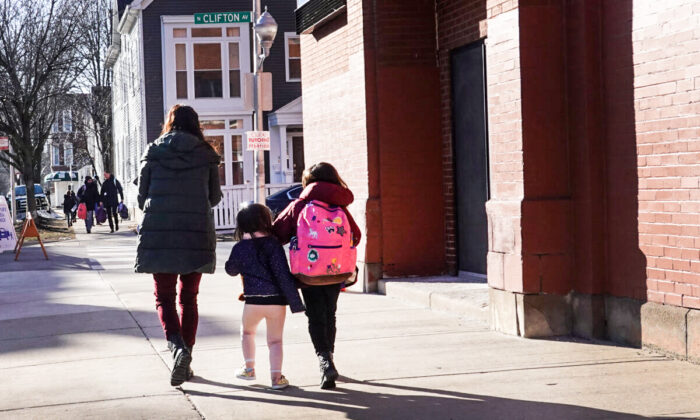 A mom picks up her children at school in Chicago on March 1, 2021. (Scott Olson/Getty Images)
Social Issues

Parents Warn of Their Children Being Subjected to Transgender Indoctrination

A story by three mothers
By Patricia Tolson
biggersmaller
Print

A sharp rise in the number of children in the United States who identify as transgender has alarmed some parents. As these numbers grow, three mothers share the warning signs of transgender indoctrination.

A study conducted by the American Academy of Pediatrics released in May 2020 showed nearly 10 percent of high school students in just one school district identified as gender-diverse. That 10 percent figure is far higher than past estimates, such as a 2017 government survey of U.S. high school students that indicated only 1.8 percent said they identified as transgender. While some studies suggest the higher rate of suicide and attempted suicide among transgender children is related to non-affirmation, other research shows that the higher suicide and attempted suicide rate among adolescents with gender dysphoria is more related to their history of other psychiatric diagnoses and self-reported emotional and behavioral problems.

While the study, called The Trevor Project—widely cited by those who push the affirmation-only approach to avoid self-harm—does show that a significant number of transgender youth admit to heavy use of drugs and alcohol, the study didn’t explore or provide any statistics regarding the preexistence of other psychiatric diagnoses or self-reported emotional and behavioral problems among the participants.

While each of the three families comes from different backgrounds and lives in different states, each of their newly self-identified transgender children has some things very much in common. They are all in the same age group, they are all socially awkward, and all have been diagnosed with some form of social or psychological disorder.

Vera Lindner of Los Angeles told The Epoch Times “the trans bomb was dropped,” into her world a year ago when her daughter was 14 years old. Her daughter, now 15, had been diagnosed with Asperger’s syndrome and attention deficit disorder. She suffers from depression, anxiety, insulin resistance, and obesity, and has also been diagnosed with polycystic ovary syndrome (PCOS).

Dee, of Clover, South Carolina, has a 17-year-old daughter who was indoctrinated at the age of 15; the teenager has been diagnosed with pre-adoption trauma.

A concerned mom in Augusta, Georgia, who is a single parent, spoke to The Epoch Times on the condition of anonymity, using the pseudonym Mary. She said her son made his transgender announcement in November 2020. While not formally diagnosed with any specific disorder, she “had him tested when he was younger for being on the [autism] spectrum and he fell in the gray zone.”

“They could not say yes or no,” Mary said. “He has always been a bit socially awkward and quirky.”

The trans-transformation of Vera’s daughter started when she began identifying as a lesbian and started watching YouTube videos with themes like “What do lesbians look like?” and “Who is the ‘most lesbian’ from among this line-up?” Then came the “unrequited love for a butch-lesbian girl who was the first one to self-identify as a ‘trans-boy,’” Vera said.

“This individual was the ring-leader, very aggressive,” she said. “Also, very tech-savvy.” The “trans-boy” set up multiple Discord groups for the group her daughter had been introduced to, with channels such as “vent,” “general,” “art,” “LGBT” and specifically, “NSFW” where they were posting male nudes and pornography for each other to watch.

“At the same time,” Vera said, “they all got into TikTok and Instagram and started watching trans-related content—vile, stupid, narcissistic young adults posting rotten material on these platforms.”

The subject matter of these posts centered around such things as, “you are trans if you…,” “you have been playing a role of a girl all along but you are not a girl,” and posed questions like “do you feel like a girl?”

For Dee’s daughter, everything started when “a friend who had decided she was trans a year before she took her down the proverbial hole and taught her what to wear” and exposed her to lesbian pornography.

As with Vera’s and Dee’s daughters, Mary’s son spent hours on social media sites consuming hard-core, graphic pornography sent to him by his new online trans peer group that evades parental controls by classifying the content as “cartoons.”

By the time Vera’s daughter was in eighth grade, she “was so hyper-fixated on LGBT that she was incapable of speaking about anything else besides LGBT” and she “cycled through orientations of lesbian, pan, queer, until finally, she dropped the trans bomb shortly after turning 14.”

Soon after, she “cut her hair, started wearing boys’ clothes, bought men’s underwear” and “demanded a binder.” She also wanted to get a “supplement from Amazon for increasing testosterone,” which Vera refused to purchase for her, and to see a “gender doctor,” a request she also rejected.

While Dee’s daughter had once been a “happy, seemingly well-adjusted and mature” child who “excelled academically, she quickly became “disobedient, contentious, contemptuous and untruthful.” Once a normal teen-aged girl, she now “presents as a boy, wearing dark colors, hoodies, and occasionally wears a binder” and she has “cut off her beautiful hair and tries to pass with a man bun.”

Mary said she was shocked at her son’s trans declaration, since there was “no prior behavior that would indicate any of this.”

As with Vera’s daughter, Mary’s son became “obsessed with talking about trans issues.” She said “all talks revolved around it,” and “he demanded puberty blockers and hormone replacement therapy.”

Mary said the transformation of her son started after he “found friends who were also declaring non-binary and transgender status and they began providing him with “their old girl clothes.” He quickly went from “cautiously” wearing a skirt to “full-on cross-dressing” and he “became noticeably irritable and rude,” a characteristic she said was “extremely out of character.” During one manic episode, she said her son began screaming at her to look at him to recognize that he’s “a girl now.”

“It was very disturbing and frightening,” she said.

The Fight to Reclaim Their Children

Because her daughter was “going through a mental breakdown upon dropping the trans bomb,” Vera and her husband decided not to take away her electronic devices. To mitigate the destructive influence of social media, they did purge her accounts of all transgendered contacts. They also stopped sending their daughter to her therapist, who had started “casually talking about testosterone and encouraging transition.”

Her daughter’s PCOS is being managed with medication and she has a daily regimen of light exercise. She has started 10th grade in a charter school and is making new friends. Still, the therapy that has had the most positive effect on her daughter has been volunteering on family farms.

“She adores animals,” Vera said, “so we adopted two kittens, in addition to the dog we brought with us. Being around animals and kind people has helped her rebuild her self-esteem. We also go for walks daily. Her depression is much better, definitely in remission. So is the eating disorder. Here she is connecting with real humans and hearing their real-life stories.”

For Dee—because “there’s too much being shared at high school at lunch and during breaks”—parental monitoring of her social media accounts, a summer job, increased volunteer work to get her off social media, and new social circles has had only marginal improvements on her daughter’s behavior. But she isn’t giving up.

Fearful and overwhelmed by the sudden changes in her son, Mary decided to send her son to stay with his father. During those next three weeks, she began to dig into his online history, and many changes have been made. Since her son’s return, she has taken away his electronic devices and installed three layers of parental control on his phone. She uses Circle and Bark apps to monitor screen time on the phone and frequently checks with her internet provider for controls they provide.

Despite her efforts, she said her son still manages to find “a lot of gender-bending in obscure corners of the internet.”

“His attitude is slightly better,” she said. “I have taken him to a new therapist that is not affirming. I am not sure how much that has helped so far, though. The previous therapist was terrible and made things go from bad to violent with the blind affirmation model.”

“She has made tremendous progress in healing her mental illnesses, and I don’t want her to slip back,” she said.

Dee also fears that her daughter will “medicalize and embark on a course of surgery that will cause irreparable damage to her body.”

“And I fear she will latch onto her ‘glitter’ family and become estranged from us,” she said.

Mary also expressed concern that her son “will begin medicalization when he turns 18” and that “he will ruin his body and his life in search for happiness that is promised to him,” but that “will only result in his ruination mentally and physically.”

“He will become a forever patient of the pharmaceutical and medical industry and dwindle his dating pool down to nothing and he will be alone,” she said.

Although a self-described “lifelong” liberal Democrat, Vera blames former President Barack Obama and the liberals “who parrot trans slogans” and “allowed this ideology to infiltrate so deeply the American society and families.” She blames the “friends who dragged” her daughter into the trans world, and the school lockdowns that left home-bound, isolated children “hanging on their phones all day long to be immersed into this cult.”

“And I blame myself,” she says, “for not doing deep reading on this whole trans-thing years ago. I immersed myself only after she dropped on us the trans-bomb, unexpectedly.”

Dee also blames “the friend who dragged” her daughter into this, “and social media, which uses algorithms to shove the trans-agenda into her online world.” She also blames her daughter’s three therapists, “all of whom affirmed her and treated her like a special unicorn.”

“They know the danger this technology poses to our mental health and the influence it has, especially on young vulnerable people,” she said. “I blame them for not having stronger walls against pornography when kids can easily click an ‘over 18’ button.”

She also blames the pharmaceutical and medical industry, which “blindly affirm this and push drugs and surgeries on kids” and therapists who use suicide statistics to pressure them into affirming their child’s irrational decisions, yet give no thought to the idea that the child may deeply regret those choices and “take their life after the transition.”

“To all despondent parents who just got blindsided by this,” two of the moms offer some advice.

Vera: “Read as much literature as possible, both affirmative and also trans-critical. Be familiar with the propaganda and lies so you can rebuff them. Nothing substitutes for knowledge and information.”

Mary: “Cut off electronics/online activity, be vigilant about parental controls and monitoring. Be cautious and not confrontational and keep communication lines open and encourage critical thinking. Give them as much love as possible, but also be firm as the parent. Get them outdoors and back in nature and into the world like through volunteering, extracurricular activities, or if they’re old enough, getting a job.”