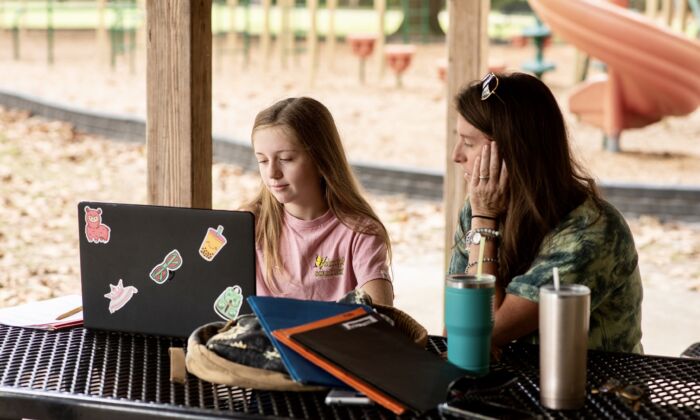 Lillian Hickey (L) does school work with her mom at a park in Alachua County, Florida, on Oct. 12, 2021. (Amber Dorn for The Epoch Times)
US News

Petitions in Palm Beach, Broward, and Leon counties will be filed soon, attorneys close to the cases say.

What transpires in Florida could have implications across the country. Attorneys involved in the cases are working with other lawyers across the country in a loose alliance formed by Gainesville attorney Jeff Childers. Their hope is to develop “template” lawsuits that can be used successfully by attorneys nationwide, he says.

Meanwhile, the Florida Department of Education sanctioned eight counties on Oct. 7 for defying the state’s ban on school mask mandates. All eight superintendents have argued that their policies are in compliance and that sanctions shouldn’t be imposed, as they are following the law and serving students in the name of safety.

Hillsborough school board members then voted to change the mask policy in the county, allowing parents to opt their children out of mask-wearing, without the requirement of a medical exemption.

The other seven school districts now face financial penalties from the state. However, the Biden administration has started offering grant money to school districts that incur financial losses as a result of defying state bans on mask mandates. Last month, the U.S. Department of Education awarded Broward County about $420,000 and Alachua County $147,710 to cover school-board member salaries.

In the courts, attorneys for parents felt they’d won a victory in the case involving Alachua and Duval counties, at least preliminarily. They had filed an emergency petition for a writ of mandamus, an order to a government official to properly fulfill official duties or correct an abuse of discretion.

On the next business day after the petition was filed, the First District Court of Appeal gave the school boards and superintendents four days to “show cause why the petition … should not be granted.”

Attorneys for the Alachua County School Board and superintendent responded to the Court that the parents’ petition “failed to allege any facts to establish standing or meet the elements necessary to justify the extraordinary issuance of a Writ of Mandamus. Therefore, this Court should deny [it].” At the time of publication, the Court had not ruled.

In the case involving Brevard and Orange counties, the 5th District Court of Appeals answered by giving parents 10 days to show why their petition “for Writ of Mandamus should not be transferred to the circuit court, which is in a better position to fact find.”

It wasn’t the answer that attorneys and parents had hoped to receive, said Childers, who has been advising the attorneys who filed the petition. But he expressed confidence that the court would be persuaded by their response.

Parents want the court to tell the school boards and school district superintendents to comply with Florida laws concerning mask opt-outs and quarantine procedures, Childers said. The school boards, he says, are ignoring Florida Department of Health orders that say the decision about whether or not a student should wear a mask at school belongs solely to each child’s parent.

Childers put aside corporate clients recently to focus solely on representing people affected by mask and vaccine mandates and other “freedom issues,” without requiring a promise to pay. He hopes to take the fights across the country.

In his home county of Alachua, Childers delivered a 200-page binder to each school board member outlining why the local school superintendent is inappropriate and unqualified to hold her position. County Superintendent Carlee Simon has become a frequent guest on television news and is locked in a public battle with Florida Gov. Ron DeSantis, a Republican, over the mask issue.

Since Simon started the job in July, parents have spoken out at school board meetings against her, not just for her determination to keep students masked in school, but also because of her commitment to policies related to equity in schools, an idea stemming from critical race theory.

“She’s a social justice warrior,” and many parents want her removed from her job, Childers said.

Simon couldn’t be reached for comment. Parents in the county she serves aren’t all against her policies. Many have praised her defiance of the state’s moves to block the mask mandate, and her plan to “reimagine” the district’s schools.

Simon shared her “reimagining plan” with the school board in a 182-slide PowerPoint presentation that described the creation of at least 24 administrative positions, including a chief of equity, inclusion, and community engagement, to oversee a new division.

Lillian Hickey, the daughter of one of the plaintiffs in the lawsuit against the school mask mandate in Alachua county, just wants to go back to school. But she can’t if that means wearing a mask all day, the Newberry, Florida, sixth-grader says.

Hickey, 12, has a rare disorder called pediatric autoimmune neuropsychiatric disorder. Because of related inflammation in her brain, wearing a mask over her nose and mouth causes her to have extreme anxiety, exacerbated obsessive-compulsive disorder symptoms and tics that cause her head to shake from side to side, and her arms to flail uncontrollably.

She’d heard from friends about how poorly they were treated by teachers and other students after submitting medical exemptions to opt out of wearing masks. The fear of drawing similar scorn caused more panic and more symptoms. So her parents, Kimberly and Ed Hickey, enrolled her in an online school program.

“I hate it!” Lillian said, slamming her fist into her palm. She wanted to join the school band this year and play flute or trumpet. She wanted to try out for the volleyball team and soccer.

After staying home last year because of forced mask-wearing, she and her parents had hoped that this year things in Alachua County schools would be different.

“I kept telling her all summer long, ‘I think it’s going to be OK, Lillian,’” her mother said. “There are so many kids like her who want to be in school.”

Since Lillian was diagnosed with a damaged immune system in second grade, they’ve learned how to protect her. That’s part of what’s so frustrating—that some parents demand all children wear masks to protect the few who may be at risk of getting sick with COVID-19, Kimberly Hickey says.

“We’ve never wanted to put [protecting her health] on anyone else,” she said. “If a duck is missing one wing, are we going to tell all the others not to fly? No!

“I don’t need the school to take care of my child. That’s my responsibility!”