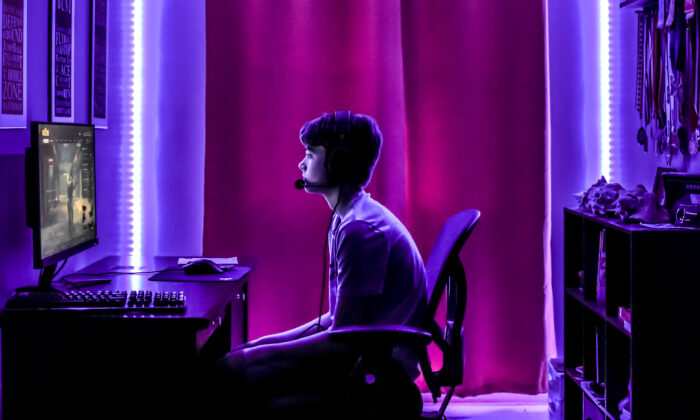 Under restrictive nationwide COVID-19 lockdowns, for many people, gaming was one of the few active recreations, social activities, and creative outlets available.

From 2020 to 2021, revenue for gaming companies skyrocketed.

Activision Blizzard and Tencent didn’t respond to requests for comment.

By contrast, the movie industry that traditionally competes with video games has tanked.

But this massive profit from games isn’t just a case of free-market business as usual, some experts say.

Gaming companies often use manipulative methods similar to gambling, and the number of people addicted to video games has risen as well.

Much of gaming’s revenue comes from things that gamers hate the most, features experts say are intentionally designed to mimic gambling, take advantage of human impatience, and capture the money of gamers in traps engineered from cutting-edge psychology.

“It’s like selling your soul to the dark side,” addiction expert Dr. Nicholas Kardaras said of psychologists who work for gaming companies. “You’re going to use your talents to help addict people.”

As gaming’s revenues have increased, companies have “weaponized” psychology to wring money out of the more than 244 million gamers in the United States, he said.

U.S. video gaming is divided among console-based games, computer-based games, and mobile gaming apps, although there is some overlap between these categories.

“It’s a whole seismic shift away from traditional marketing and PR,” Kardaras said.

“There’s a difference between creating a catchy jingle to sell a car, as opposed to really sinking your hooks into the psyche of a vulnerable child to then create a consumer slave for the rest of their lives.”

The gaming features that make the most money were born in casinos, said Kardaras. They are designed to be habit-forming.

“Gaming, like gambling, uses what’s called an intermittent reward schedule, which happens to be the most habit-forming kind,” he said.

“This is the slot machine reward schedule. Slot machines wouldn’t be as habit-forming if you won every time.”

To turn video games and app games into cash, companies use every foothold they can.

Gaming companies use secret monetization formulas to target players based on their individual data. For instance, apps record when players have spent money in the past and make similar offers under similar conditions.

In a famous experiment in the 1970s, psychologist Walter Mischel tested the ability of children to delay gratification by offering them a choice between one marshmallow immediately, or two marshmallows later.

In the 1970s, almost all older children waited for the larger reward, Kardaras said. The test was effectively a measure of maturity.

But today, even older children tend to take the marshmallow without waiting. Kardaras said the change in impulsivity comes from a digital culture that promotes instant gratification.

“What the pandemic did was throw kerosene on the fire that had already been burning,” he said. “We’d already been primed for impulsivity because of our digital immersion, because of that instant gratification feedback loop that we all experience.”

The best weapons in the gaming industry’s money-making arsenal all rely on impulsivity and impatience.

Loot boxes let gamers pay money for items in-game that are otherwise difficult, or impossible, to get. Gamers can either play games for hours to get an item or pay money to buy it. These boxes exist both in apps and in traditional video games.

But loot boxes don’t just sell items. Instead, each individual loot box has a chance to unlock the one item a gamer wants.

In effect, a loot box is a slot machine accessible to children that offers a chance to win a desirable virtual item instead of a cash payout.

Two loot boxes in Activision Blizzard’s Overwatch team shooter game cost about $2. But the more a player buys, the sweeter the deal. There’s no guarantee whether a gamer will get the item he or she wants when opening a loot box, so the game incentivizes players to buy many.

Other games rely on gems, diamonds, or other in-game purchase items to make money. Free apps offer players a chance to play a game. But certain parts of the app are slow, irritating, or difficult to manage. For instance, upgrading a building in Tencent’s base-builder app Clash of Clans can often take hours, during which a gamer can’t progress.

But with purchasable gems, the same building can upgrade instantly. This game mechanic can result in players spending thousands of dollars on games without parental permission.

On The Tonight Show, comedian Jack Black told the audience that his 8-year-old son spent more than $3,000 on in-game “diamonds” without his father’s knowledge.

In 2014, Apple paid out $32.5 million to 37,000 customers for in-app purchases made by children without parental knowledge. Although parents can get refunds for these purchases by contacting Apple, these issues can sometimes go unnoticed on a credit card bill.

Gamers Versus the System

Unsurprisingly, many gamers hate these features.

To many gamers, in-app purchases resemble panhandling more than they resemble selling. The irritating demands for cash only stop when they pay up.

Even so, the hated features continue to make cash hand over fist. Money from games that are free with in-app purchases makes up 85 percent of gaming revenue, according to research collected by Fortunly.com.

About 3 percent of gamers are addicted to video games, according to a 2020 study by researchers from the University of Adelaide.

Experts disagree on whether video games are actually addictive. Extremely immersive video games are so new that it’s still debatable just why people still play them so much. Both sides make compelling cases.

Some experts say video games are addictive in the same way, and for the same reason, that gambling is addictive.

When people get the adrenaline rush of a victory, exciting rewards, and a feeling of progress, they continue playing games even when they have more important things to do.

About the same proportion of gamers and gamblers are addicted.

Other psychologists say the problem isn’t addictive games, but underlying issues within people.

Psychology professor Christopher Ferguson said that people who blame games for addictive behavior are causing a moral panic. Games aren’t addictive, but some people are addicts by nature, Ferguson said. A small proportion of people get addicted to any interesting activity, he added.

There are food addicts, sex addicts, work addicts, and gaming addicts, not because these activities are addictive, but because some people have addictive personalities, Ferguson argued.

“If someone goes on a week-long bender on heroin, that’s bad,” said Ferguson. “Whereas if you have a person that plays Civilization for a week a bit obsessively, it’s not really the same thing.”

Ferguson said that gaming during the lockdowns has been a good thing. It kept people indoors, socially connected, and entertained during a stressful time.

Right now, those who argue gaming is unusually addictive are winning the public policy debate.

The World Health Organization (WHO) and American Psychiatric Association (APA) categorized excessive gaming as a disorder.

China outlawed gaming for children during the week and limited weekend gaming. But Chinese company Tencent runs one of the biggest gaming app empires.

“It’s not shocking that a country like China would use whatever means necessary to addict the children of other countries while being cautious about their own kids,” Kardaras said.

Addictive or not, too much gaming can have a terrible impact on people.

In extreme cases, addicted gamers can spend up to $5,000 a month on video games, said professional counselor Matt Lawson of Chicago Compass Counseling.

But, in most addiction cases, people spend around a couple of thousand dollars a month.

Despite these figures, the real cost of game addiction is time and sleep, Lawson said.

In some rare cases, people have died in ways related to their video game habits.

Woolley had lost touch with his family and gave up on life outside the game, said his mother, Liz Woolley.

When he tried to quit, he shot himself, with the game still running on the computer.

“He got addicted within three months,” she said. “He lost his job. He got evicted from his apartment. He no longer cared about the future. He told me in all seriousness that he wanted to play the game the rest of his life.”

Liz Woolley is the founder of Online Gamers Anonymous, a recovery group for obsessive gamers.

Only a tiny percentage of obsessive gaming cases result in death. Most are far less serious.

Scott, a former gaming addict from Virginia, said he spent weeks at a time sleeping five hours per night because he was playing EverQuest and World of Warcraft. At one point, he spent 30 hours a week gaming.

“The biggest problem was sleep deprivation from getting to bed at one, or two, or three, in the morning,” Scott said. “That can cause huge problems and compound other problems. It’s kind of like a vicious, downward spiral.”

Without sleep, Scott said he had low energy levels, poor memory, felt grumpy, and got impatient easily. He didn’t want to be around other people. These issues damaged his relationship with friends and family.

At first, Scott said he thought his gaming was a bad habit. But when he tried to stop, he found it strangely difficult.

“We go through withdrawal symptoms,” he said. “We feel extremely restless and irritable. We feel very impulsive about it. We’re definitely not productive.

“Our brain feels scrambled and we feel lost without the crutch that we’ve been using. And so that’s why addiction is such a huge problem is because it’s so, so miserable.”

Aaron, another gaming addict, said that he felt depressed for three months when he stopped gaming obsessively.

“The only reason I was able to break out of the addiction cycle was that I moved back in with my dad and his internet could not support my gaming habits, which forced me to quit,” he said.

“The withdrawals and depression was the toughest part.”

Scott said that it took four years for him to get over his addiction. To do so, he stopped playing all video games.

It isn’t just the simple psychological reward system that gets people obsessed with a game. A sense of progress and meaning underlies much of game addiction, Aaron said.

“Games are addicting because it is a chance to be in a world that you control. A world where you can matter and make a difference. They are easy to understand and honestly, they are an economical thrill,” said Aaron.

Although gaming addicts come from all ages, counselor Jeremy Edge said most of his video-game-addicted clients are boys between 15 and 17. Edge founded the internet addiction site Escapingthe.com.

“They have no drive, or direction,” he said of gaming addicts. “I’ve also seen that’s kind of a big factor, where they’ll they find purpose in games so they’ll increase their time there.”

Lockdowns and COVID-19 news made the real world joyless, lonely, and purposeless, Kardaras said. Video games offered all these things. Or the pixels that seemed like these things.

Both sides of the addiction debate agree that lockdowns have created the ideal environment to escape through addiction. Lonely, purposeless people make great addicts.

“There is some evidence that everybody’s becoming a little bit more mentally ill now,” said Ferguson. “We’re just going through a very difficult period right now as a culture.”