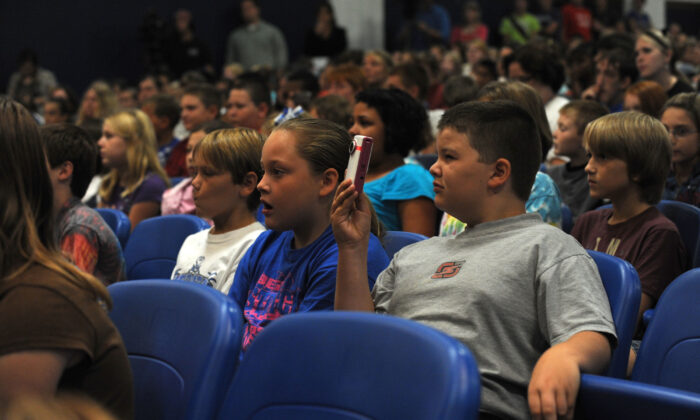 Students look on during an assembly at Checotah High School to surprise students with more than $117,000 in new music instruments, a joint gift from Underwood?s C.A.T.S. Foundation and ACM Lifting Lives in Checotah, Okla. on Aug. 28, 2009. (Rick Diamond/Getty Images for ACM)
Politics

The Oklahoma House on Thursday voted to ban public schools and universities from teaching critical race theory in civics and history classes.

After hours of discussion and debate, the GOP-controlled House voted 70-19 in favor of the bill, HB1775, which now heads to Gov. Kevin Stitt’s desk to be signed into law.

It would prevent a number of topics, including that “one race or sex is inherently superior to another,” and that “an individual, by virtue of his or her race or sex, is inherently racist, sexist or oppressive,” from being taught in the state.

The sponsor of the bill, Republican state Rep. Kevin West said in a statement that students are being taught that because they’re a certain race or sex, they’re “inherently superior to others or should feel guilty for something that happened in the past.”

“We’re trying to set boundaries that we as a state say will not be crossed when we’re teaching these kinds of subjects,” West said.

Democrats argued that the bill was a waste of time and addressed a problem that doesn’t exist.

“Instead of focusing on the real issues facing Oklahomans, the majority party continues their attack on anyone in Oklahoma who might not look, think, love, or act like them,” said state House Minority Leader Rep. Emily Virgin, a Democrat from Norman.

Critical race theory has gradually proliferated in recent decades through academia, government structures, school systems, and the corporate world. It redefines human history as a struggle between the “oppressors” (white people) and the “oppressed” (everybody else), similarly to Marxism’s reduction of history to a struggle between the “bourgeois” and the “proletariat.” It labels institutions that emerged in majority-white societies as racist and “white supremacist.”

Like Marxism, it advocates for the destruction of institutions, such as the Western justice system, free-market economy, and orthodox religions, while demanding that they be replaced with institutions compliant with the critical race theory ideology.

In February, the Chinese American Citizens Alliance of Greater New York condemned critical race theory, describing it as an outgrowth of the European Marxist school of critical theory that interprets American social and political life through the lens of a power struggle between the race of the oppressor and that of the oppressed.

Proponents of critical race theory have argued that the theory is merely “demonstrating how pervasive systemic racism truly is.”

In one of his first executive actions in the White House, President Joe Biden rescinded his predecessor’s ban of critical race theory in federal workplaces. Former President Donald Trump’s September 2020 executive order declared that diversity and inclusion training for federal employees should not promote “un-American” and “divisive concepts.”

News of the Oklahoma vote comes days after Idado Gov. Brad Little signed into law a bill, H 377 (pdf), that would prevent the teaching of critical race theory in the Gem State’s public schools and universities.

Elsewhere, Republican lawmakers in Arkansas, Georgia, Iowa, New Hampshire, and West Virginia have said that they aim to ban the teaching of critical race theory in schools, workplaces, and government agencies.

Gov. Stitt’s office didn’t immediately respond to a request for comment by The Epoch Times.