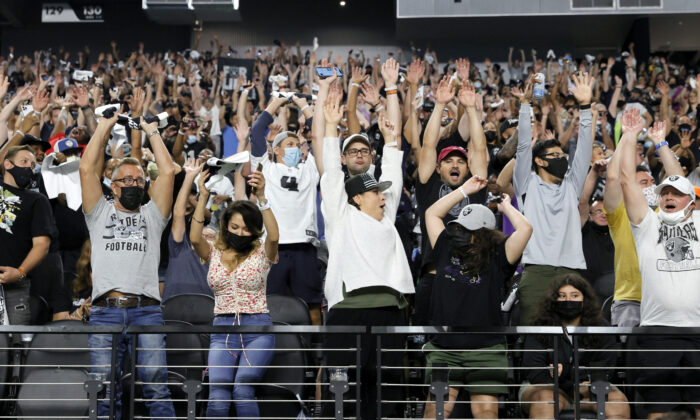 Fans do the wave during a preseason game between the Seattle Seahawks and the Las Vegas Raiders at Allegiant Stadium on Aug. 14, 2021 in Las Vegas, Nevada. (Ethan Miller/Getty Images)
NFL

The Las Vegas Raiders are requiring all spectators at home games in the upcoming NFL season to show proof-of-vaccination documentation, or get inoculated against the CCP (Chinese Communist Party) virus at Allegiant Stadium prior to home games.

The announcement came hours after Nevada Gov. Steve Sisolak, a Democrat, said on Monday that large events in the state will require people to show they have been vaccinated against the CCP virus.

All fans who are able to provide the documentation through the CLEAR mobile app are cleared to enter the stadium and don’t have to wear a mask, the team announced in a statement.

Fans who are not vaccinated can get the jab onsite before entering the building, but have to watch the game while wearing a face covering, they added.

“Health and safety has always been our number one priority,” said owner Mark Davis. “After consultation with Governor Sisolak and other community leaders, this policy ensures that we will be able to operate at full capacity without masks for fully vaccinated fans for the entire season.”

Sisolak said large indoor venues in cities like Las Vegas and Reno will be allowed to opt-out of the state’s mask requirements if they verify their guests are inoculated against the CCP virus.

Venues with capacities greater than 4,000 will be eligible for the exemption. Partially vaccinated people and children ineligible to receive vaccines can attend venues that opt in but must remain masked. Sisolak made clear that the policy was not a mandate and was voluntary for venues.

The Raiders said in its announcement that the new policy marks them the first NFL team that has put forth a “vaccine/no mask policy” for the upcoming season. The rule will go into effect on Sept. 13, when they will play their first home game against the Baltimore Ravens on ESPN’s “Monday Night Football.”

A similar policy was put in place by the New Orleans Saints last week, although it differs slightly. The Saints are asking fans to either show proof-of-vaccination or a negative COVID-19 PCR (polymerase chain reaction) test from the previous 72 hours, the team said in a statement.

Spectators of the Saints are also still required to wear masks while they are inside the building, regardless of vaccination status.

The new rule for large events in Nevada was announced as President Joe Biden recently urged cities to adopt controversial proof-of-vaccination requirements for restaurants and other businesses.

Rights groups including the American Civil Liberties Union have warned against similar measures, such as vaccine passports, as potential infringements on Americans’ rights.

Sisolak said he doesn’t plan to mandate such measures for restaurants or small venues, but any private business could adopt them if they choose to.