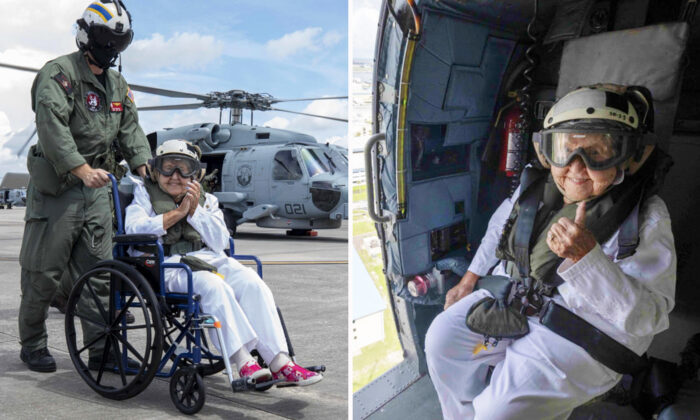 On her 100th birthday, the widow of the Navy’s first master chief petty officer in World War II visited the ship named after her late husband.

The birthday girl was welcomed aboard the USS Delbert D. Black at Naval Station Mayport in Florida earlier in July to celebrate her 100th year of life.

Irma Black had been married for 50 years when her husband Delbert Black passed away in 2000.

They celebrated her big day in the chief’s mess. Then she expressed her birthday wish: to fly in a helicopter.

The Navy servicemen made it happen.

She was flown by the “Airwolves,” circling above the ship while the ship’s crew hailed her from topside.

After landing, the thrilled centenarian wasn’t quite ready to call it a day.

She asked if they would take her on an aerial tour over downtown Jacksonville, and they obliged her in a second sortie.

Aerial photos were taken during the flights—and were later posted on Naval Station Mayport’s Facebook page.

After returning, she was presented with a framed photo from the ship’s crew and she posed for more photos.

Irma’s husband, who survived the attack on Pearl Harbor, became the first enlisted representative to the Chief of Naval Operations during World War II. “He counseled the highest Navy councils on problems associated with enlisted guidance, leadership and policy,” Naval Station Mayport stated.

Irma herself joined the Women Accepted for Volunteer Emergency Service program where she served as a seaman first class storekeeper.

After her husband passed, Black continued supporting the Navy through various advocacy organizations such as the Navy Wives Club.