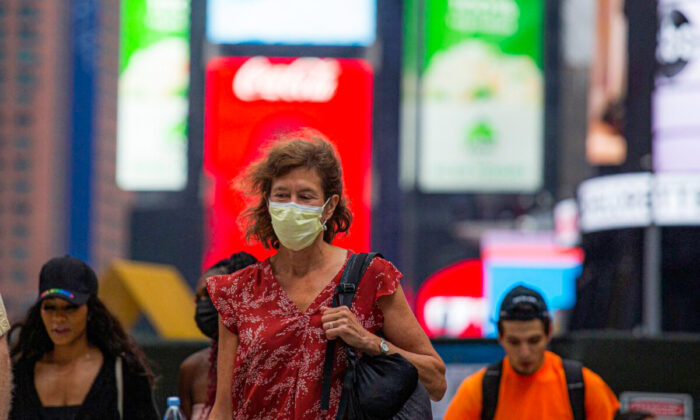 A woman wears a face mask in Midtown Manhattan in New York on July 29 2021. (Kena Betancur/AFP via Getty Images)
Featured

Natural Immunity: An Alternative to Vaccines?

“I have worked over 30 years on health policy,” answered Xavier Becerra, who is secretary of the Department of Health and Human Services.

“You’re not a medical doctor. Do you have a science degree? And yet you travel the country calling people ‘flat-earthers’ who have had COVID, looked at studies of millions of people, and made their own personal decision that the immunity they naturally acquired is sufficient.”

Paul was responding to Becerra’s claim, made during a Sept. 21 online forum, that “because some flat-earthers—especially those in places of influence—choose to peddle fiction, we’re losing more loved ones today than we were a few months ago.”

Becerra had also said, “The harm caused by those who lack confidence in and denigrate the vaccine cannot be overstated.”

“But you presume somehow to tell over 100 million Americans who’ve survived COVID that we have no right to determine our own care?” Paul said. “You alone are on high, and you’ve made these decisions—a lawyer with no scientific background, no medical degree?”

While Becerra didn’t clearly answer Paul’s questions about natural immunity, others have stepped into the breach left by public health authorities.

On Oct. 4, a Project Veritas exposé revealed that multiple scientists at COVID-19 vaccine maker Pfizer believe natural immunity is superior to the immunity conferred by their own product.

“When somebody is naturally immune, like they got COVID, they probably have better—like, not better, but more—antibodies against the virus,” said Nick Karl, a Pfizer biochemist.

“Because what the vaccine is, is it—like I said, that protein—that’s just on the outside,” Karl said, referring to the spike protein on the surface of the CCP virus, which the Pfizer-BioNTech COVID-19 replicates with the aim of inducing immunity.

“So it’s just one antibody against one specific part of the virus. When you actually get the virus, you’re going to start producing antibodies against, like, multiple pieces of virus, and not only just like the outside portion, like the inside portion, the actual virus.

“So your antibodies are probably better at that point than the vaccination.”

Chris Croce, a senior associate scientist at Pfizer, told a Veritas journalist that natural immunity leaves people “protected most likely for longer [than vaccination] since there was a natural response.”

“If you have [COVID-19] antibodies built up, like, you should be able to prove that you have those built up,” said Rahul Khandke, another Pfizer scientist.

Yet media coverage of natural immunity sometimes seems designed to call its very existence into question.

What is natural immunity, exactly?

Does believing that natural immunity exists, or that it protects you better than the vaccine, make you a “flat-earther”—or are Pfizer’s own researchers onto something?

Natural immunity is pretty straightforward: it’s the immunity that you get to a disease after recovering from it, as a result of your immune system remembering how to fight the pathogen the next time the two cross paths.

In slightly more technical terms, natural immunity involves the adaptive immune response. It could thus potentially include not only the antibody released in response to the spike protein but also other antibodies, along with various memory B and memory T cells—in short, the sort of broad and deep response that Pfizer’s Karl described in Veritas’s undercover interview.

In fact, vaccination is intended to mimic natural immunity by promoting a manageable immune response that doesn’t cause serious illness.

Yet despite these common-sense facts, the Centers for Disease Control and Prevention (CDC) web resource on natural immunity and vaccines is frustratingly vague and arguably misleading—it sidesteps the question of natural immunity’s superiority or inferiority to vaccine-induced immunity in order to emphasize the (real and serious) dangers posed by many diseases for which vaccines are available:

“Some people believe that naturally acquired immunity—immunity from having the disease itself—is better than the immunity provided by vaccines. However, natural infections can cause severe complications and be deadly.”

With no explanation, and at a real cost to public trust and understanding, the CDC has run together two separate claims:

The first claim—that infection with COVID-19 presents more risks than vaccination, particularly in older or obese individuals—may in fact be reasonable, though it’s not the focus of this article.

If true, it would suggest that people shouldn’t intentionally contract the disease in order to gain natural immunity.

Yet the second claim—namely, that natural immunity to COVID-19 is weaker than vaccine-induced immunity—doesn’t stand up to scrutiny.

For one thing, it runs contrary to our experiences with past diseases.

As Dr. Monica Gandhi, an infectious diseases specialist at the University of California–San Francisco, pointed out in a detailed Twitter thread on the duration of COVID-19 immunity, a 2008 Nature article showed that survivors of the 1918 influenza pandemic were still able to mount an immune response to the 1918 virus roughly 90 years later.

Additionally, and as Paul noted while questioning Becerra, the CDC considers natural immunity, including presumptive natural immunity for those born before 1957, an acceptable substitute for measles vaccination.

Along similar lines, Army Regulation 40-562 states that prior infection and consequent natural immunity can be the grounds for a medical exemption from immunization—a regulation to which two active-duty service members have appealed in their lawsuit against Defense Secretary Lloyd Austin’s vaccine mandate for all troops.

Early results from Denmark, published in The Lancet in March, hint at the protective value of infection.

In that study, which involved testing of 69 percent of the country’s population, prior infection was found to shield people reasonably well from reinfection, though less so among older groups.

And a September feature by The BMJ, a UK-based company that helps provide clinicians with medical information, summarized some of the older and newer research suggesting that natural immunity is as or more effective than vaccine-induced immunity.

Notably, an April 2021 study on the entire population of Israel found that vaccination by the Pfizer-BioNTech vaccine was roughly as protective as prior infection.

An August study on data from Israeli’s Maccabi Healthcare Services went further, showing that prior infection was associated with greatly reduced risks of hospitalization and symptomatic illness compared to two doses of the vaccine among people who had never been infected.

Studies from Austria, Ohio’s Cleveland Clinic, and other countries and organizations, as well as systematic reviews and similar summaries of previous research, have painted a similar picture: immunity from prior infection is as or more powerful than immunity from vaccination.

Further underlining the immune system’s resilience to infection, a very recent study from the Finnish Institute for Health and Welfare showed that protective antibodies remained in the vast majority of those who had had COVID-19, persisting at least 12 months after their initial infection.

Meanwhile, new research from Israel and Qatar has shown that the vaccine’s protective effects begin to wane several months after the second dose.

Outside the United States, many other countries acknowledge the protective effects of natural immunity.

As reported in Science, some countries, including Israel, France, and Italy, give one rather than two doses of vaccine to people previously infected by the CCP virus, commonly known as the novel coronavirus.

Under New York City’s “Key to NYC” program, by contrast, the passports that people 12 and older need in order to access indoor restaurants, gyms, and other spaces only recognize vaccination.

And while George Mason University (GMU) professor Todd Zywicki ultimately received an exemption to his institution’s vaccine mandate on the basis of his natural immunity, many others facing vaccine mandates haven’t been so lucky.

The students’ writ noted that the university’s mandate “does not include an exemption for those with natural immunity, including those who have previously been infected and fully recovered.”

Most recently, on Oct. 10, a federal judge appointed by George W. Bush denied a request by a Michigan State University employee to receive an exemption from that school’s vaccine mandate because of her natural immunity.

The Epoch Times’ review of vaccine mandates “didn’t find a single school offering exemptions to students who had acquired immunity,” in line with mandates issued by various states and the federal government.

If natural immunity to COVID-19 is real and significant, why is it being kept out of the conversation?

Pervasive censorship, including the silencing of knowledgeable physicians and scientists, may provide part of the answer.

The nonprofit Brownstone Institute claims that the social networking website LinkedIn is suppressing its content, including a piece from Harvard epidemiologist Martin Kulldorff, in which Kulldorff argued that hospitals shouldn’t be firing unvaccinated nurses who have acquired natural immunity.

The climate of speech suppression around COVID-19 is nothing new.

While Facebook whistleblower Frances Haugen, who appeared to advocate greater censorship on the platform, was brought before the Senate and booked on “60 Minutes,” an earlier Facebook whistleblower, Morgan Kahmann, was fired after he shared documents to Project Veritas that revealed that Facebook was secretly censoring content perceived to promote “vaccine hesitancy.”

Haugen apparently departed Facebook in May of this year, though her LinkedIn profile doesn’t yet indicate that she has left the company. According to Kahmann’s most recent GiveSendGo update, he remains unemployed.

More troubling still, the Pfizer employees recorded by Project Veritas suggested that a climate of censorship and self-censorship hobbles the pharmaceutical researchers themselves.

“You don’t talk about anything that can possibly implicate you or, like, Big Pharma,” said Croce. “Even if you shut the door to the office, it’s kind of like, who’s listening?”