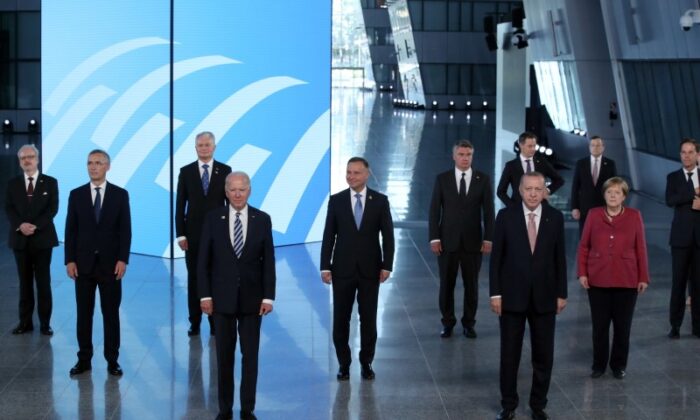 NATO Heads of the states and governments pose for a family photo during the NATO summit at the Alliance's headquarters, in Brussels, Belgium, on June 14, 2021. (Yves Herman/Pool/Reuters)

The language, which appears in the final communiqué issued after the conclusion of a one-day summit in Brussels, signals a burgeoning convergence in the West recognizing the various threats posed by Beijing.

It came one day after the Group of Seven (G-7), made up of the world’s seven wealthiest countries, issued a statement criticizing Beijing’s human rights violations in Xinjiang and Hong Kong, as well as its unfair economic practices.

NATO also said the regime’s growing influence and international policies may present “challenges that we need to address together as an Alliance.”

President Joe Biden has continued former President Donald Trump’s tough-on-China approach but has emphasized bringing along allies to present a unified front against the regime.

Biden also told European allies their defense was a “sacred obligation” for the United States.

“Article Five is a sacred obligation,” Biden said, referring to the transatlantic alliance’s collective defense pledge. “I want all Europe to know that the United States is there.”

NATO Secretary-General Jens Stoltenberg said China’s growing military presence from the Baltics to Africa meant that nuclear-armed NATO has to be prepared.

“China is coming closer to us. We see them in cyberspace. We see China in Africa. But we also see China investing heavily in our own critical infrastructure,” he said, a reference to ports and telecom networks. “We need to respond together as an alliance.”

Germany’s Chancellor Angela Merkel, at her last summit of the alliance before she steps down in September, called for “balance” in the approach to the regime and for continued dialogue with Beijing.

“If you look at the cyber threats and the hybrid threats, if you look at the cooperation between Russia and China, you cannot simply ignore China,” Merkel told reporters. “But one must not overrate it, either—we need to find the right balance.

“China is our rival in many questions but also our partner in many aspects which we made clear yesterday at the G-7.”

While the European Union has already designated Beijing a “systemic rival,” governments in the region have generally lagged behind the United States and other countries in recognizing and responding to Beijing’s malign actions. Key European leaders have also previously expressed hesitancy in joining the United States to confront Beijing. This has been partly a result of the region’s deep economic links with the regime, analysts say.

For example, total German trade with China in 2020 was over 212 billion euros ($256.82 billion), according to German government data, making Beijing its top trade partner in goods.

Cathy He
China Reporter
Follow
Cathy He is a New York-based reporter focusing on China-related topics. She previously worked as a government lawyer in Australia. She joined the Epoch Times in February 2018.
CathyHe_ET