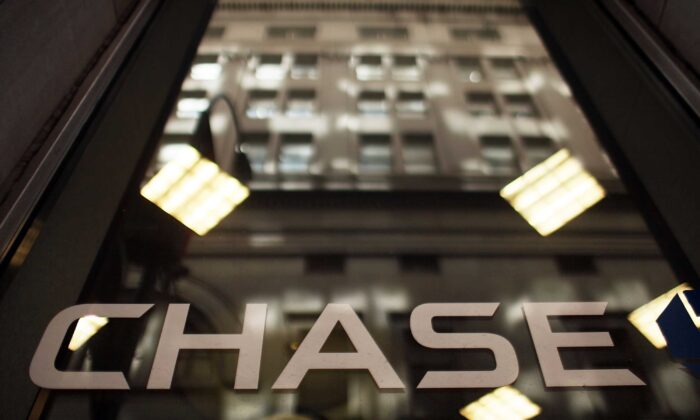 A Chase sign is viewed at a bank branch near the company's New York headquarters, in New York City, on May 11, 2012. (Spencer Platt/Getty Images)
Viewpoints

My Experience With ‘Woke’ Corporations

The notification, when it arrived, seemed innocuous enough. It appeared, on first glance, to be an email notification of some change of status regarding my credit card, obtained many years ago through the Chase Bank. Normally, I don’t even read such notifications. Life is too short.

But I happened to glance over this one, and I realized that this one I should read. Basically, it said Chase was cancelling my card. This was not my personal credit card but my business credit card through my company D’Souza Media. No reason was given for the cancellation.

I realized right away that this might be a politically motivated decision. After all, I have had the card for years. I pay my bills every month, so chronic lateness was not an issue. (Besides, credit card companies prefer people to pay late, so that they can charge them usurious rates of interest.) Moreover, my company has a stellar credit history, having been in operation for many years.

But it’s possible there was a good reason to cancel my card that I couldn’t think of. So I called Chase, and the representative informed me that she was puzzled, too. She could find no reason listed in the internal records. All she could say was that the direction had come from senior management in the bank’s main office.

The plot thickens. Several years ago, during my campaign finance case in which I was accused of exceeding the allowable contribution limit, I had my personal banking relationship with Chase abruptly terminated. This was in 2014 or 2015, and the manner of the cancellation was equally abrupt.

I lived at the time in La Jolla, California. I moseyed into my local Chase bank, where the manager knew me well. She summoned me almost conspiratorially to her cubicle, where she said that, to her complete surprise, the bank had closed my account. No, it wasn’t some sort of mistake. The head office of Chase had directed the local branch to terminate my ability to do business with Chase.

How, I wondered, could something like this happen? Again, it had nothing to do with me bouncing checks or engaging in other eyebrow-raising banking behavior. I suggested to the manager—who knew about my case—that since the FBI had obtained my banking records, maybe the Chase management became freaked out. I noted, of course, that I also had accounts at two other banks and my relationships with them continued unchanged.

I forgot about the earlier episode until this latest cancellation. What makes the new one even more surprising and disturbing is that, almost three years ago, I got a presidential pardon. I no longer have a stain on my record. My slate has been wiped clean. So the bank has no new justification to cancel me. Yet it did.

In the past year, I’ve experienced a few other cases of cancel culture in the movie business. This is not the normal intolerance that I have come to expect from Hollywood. I knew about that before I went into making movies, and therefore I set up my operation outside of Hollywood and largely independent of Hollywood, precisely so that I wasn’t subject to the pressures and threats I might get for not toeing the left-wing party line.

At the same time, I did maintain some Hollywood connections. Several of my films, for instance, have been distributed by Lionsgate. In some cases, the DVD and home box office sales have been through Universal Pictures. These are standard deals, involving standard commissions, and because my films have continued to do well, these companies were quite happy to do business with me.

Until I did my latest documentary film, “Trump Card.” Suddenly, Lionsgate passed on distribution. Universal initially said yes, but subsequently changed its mind. The unofficial word was that several people working at the company flatly refused to work on any film that might help Trump’s reelection. Interestingly, I, along with my wife Debbie, also released a feature film last year, “Infidel.” That one Universal agreed to sell on DVD. It was a political thriller, with a definite religious angle, yet it was evidently acceptable because it wasn’t going to further Trump’s reelection.

I don’t contest the right of these companies to choose their projects. Nor do I deny Chase its right to choose its customers. My concern is a larger one. These companies, by becoming hyper-political, are essentially discriminating against a significant portion of Americans who don’t share their political views.

This past weekend, my wife and I watched the movie “The Green Book.” In it, we saw a white and black man driving through the segregated South, where blacks basically lived in their own world—their own banks, restaurants, barbershops, and public lavatories and water fountains—and all because the whites flatly refused to do business with them.

It struck Debbie and me with the force of epiphany that this is where we seem to be heading. De facto segregation, not de jure segregation. And segregation not based on race but based on political viewpoint. It might seem overdramatic to say that Republicans and conservatives are the new blacks, but Republicans and conservatives are now treated in “woke” America with the same derision, contempt, and second-class citizenship that blacks were in the first part of the previous century.

I should be able to bank where I want, fly on any airline I want, and share my views on social media platforms that were set up precisely to foster communication and debate. We might need a new type of civil rights movement to combat the new political discrimination and restore equality of rights for all citizens.

Dinesh D’Souza has had a prominent career as a writer, scholar, and public intellectual, and has also become an award-winning filmmaker. His latest book is “United States of Socialism: Who’s Behind It. Why It’s Evil. How to Stop It.”