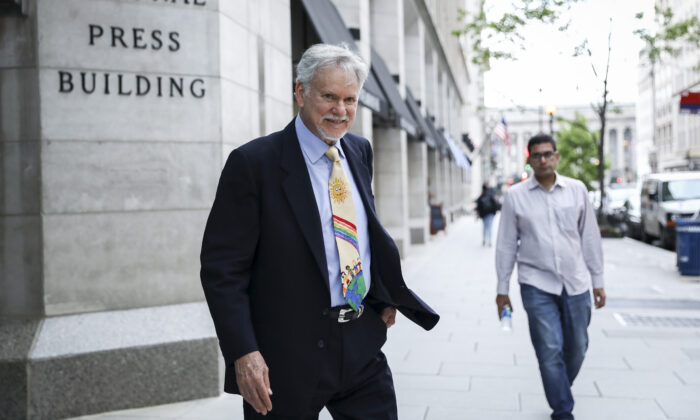 Warren Farrell, author of "The Boy Crisis" in Washington on June 27, 2019. (Samira Bouaou/Epoch Times)
US News

Key commonalities for most mass shooters in the United States are that they are male and that they lack a father figure in their lives, author Warren Farrell says.

People who carry out mass shootings at schools in particular tend to be boys who are suicidal, depressed, and dad-deprived.

In one example, a recent school shooter in Indianapolis did not have a father because in his early teens, his dad committed suicide. In another case, Stephen Paddock, who killed 58 in a mass shooting in Las Vegas, experienced his father imprisoned and went lengthy periods of time without seeing him. Adam Lanza, who authorities say opened fire in Newtown, Connecticut in 2012, also did not often see his father, who was divorced from his mother.

“What we think of when we think of mass shootings is the people who are hurt. We don’t realize that all of these people are hurt by boys who are hurt, who are deprived of their dads, who are feeling neglected and depressed,” said Farrell, the chair of the Coalition to Create a White House Council on Boys and Men.

In his research for his most recent book, “The Boy Crisis,” Farrell identified signs of boys being hurt, developing a list of 63 signs. He hopes the list, which he described as a “male depression-suicide inventory,” is used to question young people.

“Because if you have these experiences, these are red flags that the guidance counselors and psychologists in school should be paying attention to,” he said. “So for example, one of the questions that is on the inventory is, ‘do you feel that no one loves you? And no one needs you. And there’s no hope of that changing.’ So a boy who doesn’t feel loved? And who doesn’t feel needed? And feel that there’s no hope of that changing? That’s a huge red flag,” he said.

Examining the list in interactions with children could help prevent mass shootings, Farrell asserted, adding that boys who are depressed tend to act out, bullying others.

Most boys who have very troubled childhoods do not end up becoming mass shooters.

“It’s also very important to remember that when boys become mass shooters … I am not saying that they should not be fully punished and fully held accountable for this. It’s a heinous crime that has to be held fully accountable,” Farrell emphasized.

“I’m also saying, we care about protecting ourselves both from mass shootings, and also from the other things, that the crimes that the boys who are both dad-deprived and depressed and suicidal, tend to do. And if we’re going to prevent those things from happening, then we can catch the boy in the process of his grief and at the same time, save ourselves. So we have a win win situation.”