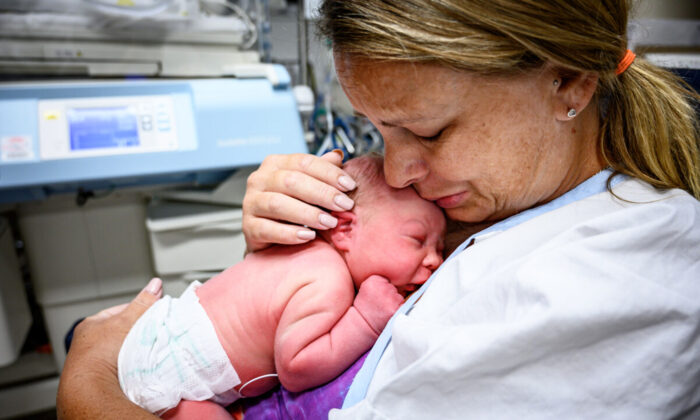 “The reality is doctors are human too and can’t be right 100 percent of the time. Our girl is proof that miracles do happen.”
By Caters News Agency
biggersmaller
Print

An Australian mom who was told by doctors to abort her baby due to a rare terminal illness was in disbelief after her miracle girl was born completely healthy. The family has just celebrated her first birthday.

The couple is now sharing their incredible story to prove to other parents that miracles can happen and to always go with your gut instinct because doctors cannot be right 100 percent of the time.

Mom of six Dinah De Regt and her husband, Adam, were over the moon after discovering they were expecting a baby back in early 2019.

However, seven months into the pregnancy, the 41-year-old from Brisbane, Queensland, was left devastated after doctors warned her that the baby had a rare and terminal genetic condition called pontocerebellar hypoplasia (PCH), a disorder that affects the brain.

The couple said they felt pressure from hospital doctors to consider a termination at 30 weeks due to having no cure for the condition. They were also told that if their baby did survive the birth, she would likely only live a few hours.

They were faced with a heartbreaking decision, but in the end, Dinah and Adam decided to go ahead with the pregnancy and cherish any time they got to spend with their daughter—no matter how short that might be.

After their little baby Brianna was born in November 2019, the couple “braced themselves” for heartbreaking news while their newborn girl underwent rounds of tests, including genetic analysis, eye scans, renal tests, ultrasounds, and a brain MRI.

However, after these examinations, Dinah and Adam were gobsmacked after doctors discovered that little Brianna was perfectly healthy.

Dinah, who is mom to Jordan, 18, twins Aaron and Alex, 11, and Olivia, 3, said: “We were elated when we found out we were pregnant. It was the most exciting news, and we couldn’t wait to be parents again.

“But at our 20-week scan, doctors started noticing that something was wrong. They said our baby has a small cerebellum.

“Eight weeks later they diagnosed her with Pontocerebellar hypoplasia. She had ventricular abnormalities and also fluid on the brain.

“They basically gave us no hope. They said our baby was not likely to live beyond a few hours after birth.”

Dinah said the doctors conveyed that their baby might survive to young adulthood with constant medical care, but “it was very unlikely.”

“In addition to this, they warned her quality of life could be terrible. She would be unable to eat, talk, or walk and would need round the clock care,” Dinah said.

“At 30 weeks, the hospital doctors suggested we consider a termination. But we decided to go through with the birth and spend as much time with our daughter as we could.”

“After she was born, I only got to have a very quick kiss and cuddle before she was whisked away for tests,” Dinah said. “Adam and I were preparing for the worst. We were waiting for the terrible news that we only had a few days or hours left with our girl.”

“But unbelievable, all the results were coming back clear. We couldn’t believe it,” she added.

Dinah added: “Finally the doctors broke the news that Brianna was perfectly healthy. She was absolutely fine, and there was nothing wrong with her. We were so incredibly shocked and overwhelmed at what we were hearing.

“They explained that these things can happen, and an MRI of the baby outside the womb is much more accurate than an ultrasound performed during pregnancy.

“We were so happy, Brianna is our little miracle baby.”

Dinah and Adam shared that they went through a traumatic miscarriage with their son, Noah, who passed away in the womb at 20 weeks back in October 2018. Due to this experience, the couple explained they could not go through with the doctors’ suggestion to have a termination while pregnant with Brianna.

“It was certainly something we had to discuss,” said Adam, who works as an arborist. “We had our other children to think about and how this might affect our whole family.”

“Dinah and I had just gone through a very traumatic miscarriage at 20 weeks the year before. I think this experience made it really difficult for us to consider having a termination. So in a way, we feel like Noah helped his little sister be here. Without going through that, we might have gone through with it.”

“But we held out hope and decided that even a few hours with our baby would be better than going through a termination,” Adam said. “It chills us to think that we could have done that when she was perfectly healthy.”

Dinah added that their miracle baby Brianna just celebrated her first birthday in November and is perfectly healthy and happy.

Thinking that they would only have mere hours with their little girl, Dinah and Adam sought help from renowned bereavement doula and birth photographer Selena Rollason from Brisbane Birth Photography to capture their time with Brianna.

Dinah said: “According to doctors, there was absolutely no chance that she would be healthy. No one was giving us any hope at all.

“I got in touch with Selena to help us through this experience and to capture some photographs of our time with Brianna.

“She was amazing with us and it meant the world to have her there. We feel so blessed with Brianna. She is healthy and reaching all her milestones.

“She is so funny and cheeky, she makes us laugh every day. The reality is doctors are human too and can’t be right 100 percent of the time. Never give up hope. Our girl is proof that miracles do happen.”

Photographer of 20 years Selena Rollason captured a series of poignant images on the day of Brianna’s birth and added that the entire experience was incredible.

“On hearing Dinah’s story, I knew instantly that this family needed my support,” Selena said. “I am a big believer in giving back and each year I try to do just that. My way of doing this is by providing complimentary photo services and support to women like Dinah, and their families.”

Selena said as a stillbirth photographer and bereavement doula, she knows “how much support these families need and how priceless having these memories are.”

“I cried as soon as I knew the baby was healthy. It was a big relief and a miracle,” Selena said. “When you support families like this you become quite invested. You cry together, grieve together, and laugh together.”

“Dinah and I did all of those things together. We still talk about it 12 months on. I get emotional even now when I look at how perfect Brianna is. She is a beautiful baby and very special,” Selena added.

Epoch Times staff contributed to this report. This story was last updated in December 2020.