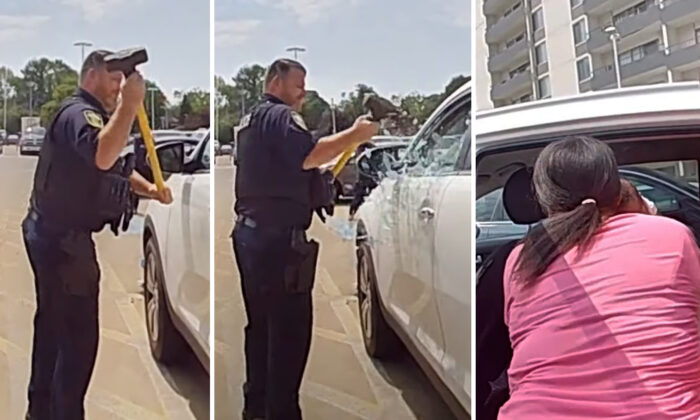 Mom Accidentally Locks Baby in Hot Car With Keys, Calls Police Who Smash Window to Save Her

We’ve heard horror stories of babies being left in hot cars during the sweltering summer season.

One Cleveland mom found herself in that dire situation when she accidentally locked her keys in the car with her baby still in her car seat inside.

The temperature in Euclid, Ohio, was 86 degrees Fahrenheit (30 degrees Celsius) that day on Aug. 13, but it was much hotter inside the car.

Frantic, the mom called the Euclid Police Department, who dispatched their officers to the parking lot where she was. One of the officers’ bodycams captured the harrowing rescue that unfolded.

Footage shows him pulling up to a crowd of concerned family and bystanders gathered around the white SUV in the lot.

He got out, rummaged through his trunk, grabbed a metal rod, and attempted to pick the lock—but to no avail.

He’s heard saying, “I’m not doing this all day with a baby in the car.”

He radios dispatch. “We’re going to bust out this window, the baby’s been here too long, sweating,” he said.

Another officer is seen wielding a sledgehammer standing in front of the driver’s side door.

He knocks lightly a few times at first without cracking the glass.

“Swing it,” the other officer says.

He smashes the window. They unlock the door, and the mom is seen freeing her daughter from the car.

They place a frozen water bottle on her back to cool her while awaiting the ambulance, which is on the way.

After the timely rescue, the Euclid Police Department posted about the incident on their Facebook page.

“A mother loading her vehicle accidentally locked her keys inside the car with her baby strapped into her car seat in the back,” they posted. “At 10 minutes, an 86 degree temperature can reach 104 degrees inside a car. The mother called Euclid Police who responded and rescued the infant.”

Social media users responded with words of gratitude for the Euclid PD.

One woman shared a similar experience—in which first responders were the heroes.

“My husband accidentally locked our car with it running in winter time,” commented Kim Polcar. “The heat was on…it was so upsetting not being able to get my baby as he screamed wanting us to get him out of the car. The fire department came super fast. I was very thankful.”