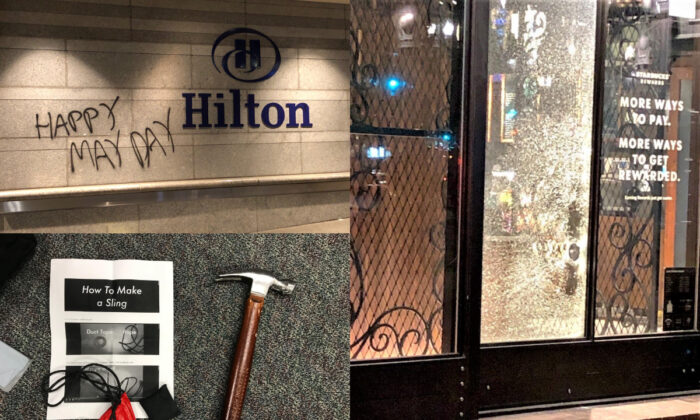 In this combination of photographs, damaged and vandalized buildings, and a hammer and slingshot found on a rioter, are seen in Portland, Ore., on May 1, 2021. (Portland Police Bureau)
Crime and Incidents

May Day Rioters Carry Out Violent Acts in Portland, Seattle

A riot in Portland, Oregon, took place on May 1, a day that holds significance for communists and other far-left ideologues.

A group of more than 100 individuals, many carrying shields, gathered in Shemanski Park between 9 and 10 p.m. and marched to City Hall, where they began smashing windows and using spray paint to scrawl various messages on the building.

Police officers declared a riot and ordered the crowd to disperse, but the mob instead began marching in the streets, blocking traffic, and damaging private businesses. Some members of the crowd used umbrellas to obscure the crimes being committed.

Most of the group wore all-black with coverings obscuring their faces, a tactic commonly employed by far-left anarcho-communist group Antifa. Known Antifa accounts were promoting the “direct action” event on social media prior to it happening. Additionally, people who have been arrested at previous riots in Portland and people who have been linked to Antifa were at the riot on May 1.

Meanwhile, a group near the federal Immigration and Customs Enforcement facility in south Portland swelled to over 60 people just before midnight. As officers tried to make an arrest, a man in the crowd pulled out a knife. The officers used munitions, prompting him to flee. He was soon caught and arrested.

At least five people were arrested on charges including riot, criminal mischief, and disorderly conduct. One of the men was found to be carrying a hammer and a hand sling along with instructions for making a sling.

Kristopher Donnelly, who has been arrested at least four times at riots, was among those taken into custody. He was charged by federal prosecutors with civil disorder. The man’s federal trial has been delayed twice by a judge, court records show; it’s currently scheduled to start on May 18. Conditions of his release stipulated that he not commit any other crimes.

“We appreciate those who engaged in their First Amendment rights this afternoon in a peaceful manner. Once again, under the cover of darkness, several dozen people decided to damage and destroy multiple businesses in our downtown area resulting in a riot,” Portland Police Chief Chuck Lovell said in a statement.

“The situation became extremely dangerous when a man brandished a knife at officers when officers were simply doing their job. The officers appear to have exercised restraint and professionalism and safely apprehended this suspect. I am proud of all of our employees who worked to minimize further damage and arrest some of the criminals involved.”

In Seattle on May 1, police officers arrested 14 people for crimes ranging from property destruction to assault and reckless driving committed during violent demonstrations.

Rioters threw bottles, rocks, paint-filled eggs, and other objects at officers, and threw lit flares into the road, the Seattle Police Department said in an incident summary.

The department didn’t identify anyone who was arrested, only giving their ages and the charges they face.

Correction: A previous version of this article misstated the number of times Donnelly has been arrested. The Epoch Times regrets the error.