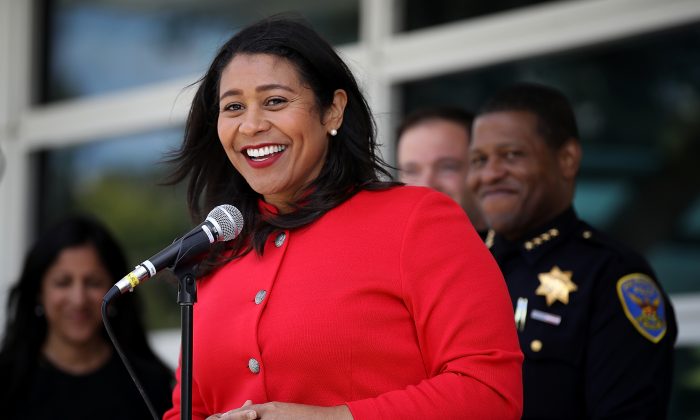 Democratic mayors in 20 of the nation’s 25 biggest cities slashed police department budgets and positions even as they spent millions of tax dollars on their own security details, according to data obtained by a government watchdog.

“In 25 major U.S. cities, officials have proposed cutting—or in 20 cases already cut—police budgets. However, what OpenTheBooks.com auditors found was that mayors and city officials still enjoy personal protection of a dedicated police detail costing taxpayers millions of dollars,” Adam Andrzejewski, CEO and founder of Open The Books (OTB), said in a statement announcing the new data.

“This is ‘police protection for me (the political elites), but not for thee (the citizens),’” Andrzejewski said.

The Chicago-based group is a nonprofit that uses public-right-to-know and freedom of information laws to maintains hundreds of publicly available databases of federal, state, and local spending with the goal of providing “every dime online in real time.”

In San Francisco, for example, the costs of the security detail protecting Mayor London Breed and other city officials spiraled up from $1.7 million in 2015 to $2.6 million in 2020.

Breed has proposed shifting $120 million from the city’s police department to mental health and workforce training programs. City officials declined to say how many officers are assigned to the security details, according to OTB.

But the mayor, who briefly sought the Democratic presidential nomination last year, continues to enjoy tax-paid police protection for himself, his wife, and his son.

City officials haven’t yet agreed to disclose the costs or number of officers assigned to the multiple de Blasio security details, according to OTB.

In Baltimore, Mayor Brandon Scott’s administration spent $3.6 million on a security detail that included 14 officers to protect the chief executive as well as State’s Attorney Marilyn Mosby and Police Commissioner Michael Harrison, according to data compiled by OTB. The Baltimore Police Department budget has been reduced by $22 million.

Baltimore has been plagued for a decade with steadily rising rates of serious crime, including murder, robbery, and assault. The city has also seen two of the present mayor’s immediate predecessors, Catherine Pugh and Sheila Dixon, resign and be convicted on various corruption charges.

In San Diego, Mayor Todd Gloria’s administration budgeted $2.6 million for 12 full-time officers to protect him and members of the city council during meetings and city hall.

“However, the mayor’s budget calls for cutting $4.3 million from the police overtime budget and spending more than $1 million to set up the new police oversight body, the Commission on Police Practices,” OTB said.

Notable among the other cities examined by OTB were these:

Minneapolis, where George Floyd was killed, cut $8 million from the police budget to launch a mental health team to respond to certain 911 calls.

Oakland officials cut the police budget by $14.6 million. Even bigger cuts are expected in the near future.

Despite two years of near-continuous rioting led by Antifa and Black Lives Matter activists, Portland officials slashed $15 million from the police budget and disbanded a gun violence reduction unit and transit team that had been accused of over-policing black communities, among other cuts.

Milwaukee officials are cutting 120 police officer positions, beginning with the current year’s budget. The reductions are to come mainly by not replacing retiring officers. Sixty positions were eliminated last year.

In Seattle, city council members at one point last year declared their intent to slash the police budget by half, but ultimately settled on a 20 percent reduction.

In the nation’s capital, officials reduced the Metropolitan Police Department’s budget by $15 million.

Philadelphia residents have seen local officials transfer $33 million from the police to other programs.

Austin officials cut about $20 million from the police department and shifted $80 million in services previously provided by law enforcement to other departments.