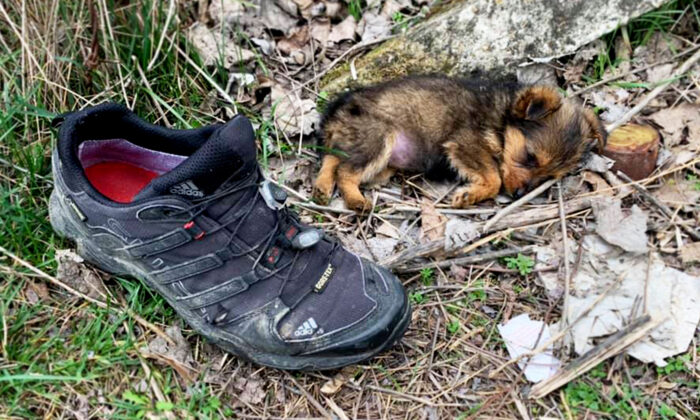 One day, a Serbian man, who often takes it upon himself to feed stray dogs in his hometown, found a tiny abandoned puppy that tugged at his heartstrings. The pup, starving and alone, was using a shoe for shelter, and the man simply couldn’t leave her behind.

It was cold outside when Goran Marinkovic, 48, found the little dog, now named Coco, on the streets of Kraljevo two years ago.

Walking along a narrow path littered with trash, Goran heard cries and followed them to a sorry sight. Next to a single black sneaker, all alone, sat a tiny puppy with yellow and black fur. Goran guessed that the puppy was using the footwear as protection in the absence of her mother.

“That’s how I found her,” he told The Epoch Times.

She was “hungry, cold, and wet,” he said. Goran gave her some salami, and after she gobbled that down, she rolled over beside the shoe, showing her belly submissively.

Goran snapped a few photos of the heartrending scene and later shared them on Facebook, captioning: “The shoe can be useful to her to hide from the rain and the sun. This [puppy] was thrown into the garbage, I found it by accident. It would be nice if we found her someone who could, and would want to, take care of her.”

Unable to leave her behind, Goran picked up Coco and whisked her off to a veterinarian for assessment. He wasn’t sure if she was strong enough to survive.

But the puppy’s will to live was still strong.

Goran shared photos of Coco’s rescue and subsequent recovery on Facebook in a bid to find her the perfect forever home. He sifted through applicants to find a potential owner, but having formed a special bond with her, he reached out to his friends working in international rescue to help him find the ideal family.

He struck gold. After getting her shots, Coco was sent to Germany. Today, she’s a happy, lively pup living her best life in a loving home, thanks to Goran’s big heart and kind actions.

“She has a beautiful home to enjoy,” Goran said. “Every rescued dog from the street who finds a home is a victory for me.”

Coco’s rescuer continues to feed between 90 and 110 stray or abandoned dogs every day, and he hopes sharing Coco’s story will encourage others to help where they can.

“Do not throw animals out on the street, because they are living beings,” he added. “I just want to awaken the conscience of people so that there are no more such cases.”