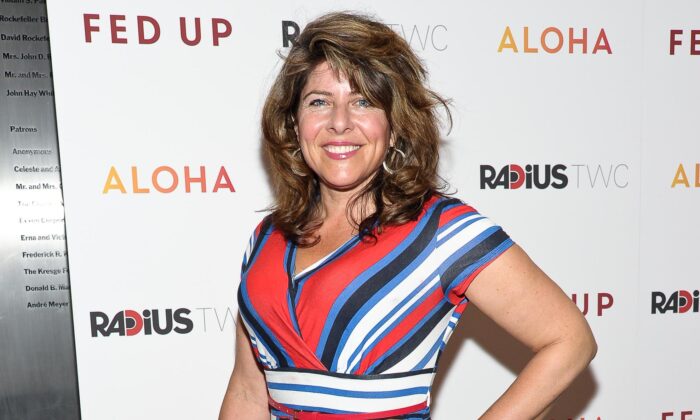 Naomi Wolf attends the "Fed Up" premiere at Museum of Modern Art in New York on May 6, 2014. (Rommel Demano/Getty Images)
Big Tech, Censorship, and Socialism

Women’s health and civil liberties author and journalist Naomi Wolf had her Twitter account suspended and her YouTube channel frozen after she raised questions regarding the side effects of COVID-19 vaccines, the constitutionality of lockdowns, and the candor of Anthony Fauci, head of the U.S. National Institute of Allergy and Infectious Diseases (NIAID).

Her original plan was to sue Twitter on her own. She was then approached by Trump’s legal team, she told The Epoch Times.

Trump announced last week that he has filed a lawsuit against Twitter, Facebook, and Google, which owns Youtube. His lawyers argued that Trump’s rights were denied when the social media companies banned his accounts.

Wolf hasn’t been given any explanation as to which of her content specifically triggered the suspension, despite her multiple attempts to reach out to both Twitter and YouTube, she said. In fact, she received no explanation whatsoever from either platform. Instead, Twitter told the media that she was spreading vaccine misinformation. She considers that both false and defamatory.

Wolf’s case highlights the escalation of social media censorship over the past several years. While the giant tech companies started with purges of voices that the establishment considered right-wing fringe, such as radio host Alex Jones and activist Laura Loomer, the list of taboo topics has now expanded so far that censors are coming after people like Wolf, a liberal feminist and life-long Democrat who used to be published by the establishment press, in newspapers including The New York Times and The Guardian.

Her Twitter account was suspended around June 4, shortly after she posted a video of her husband, a private investigator, reading a publicly available curriculum vitae (CV) of Professor Ralph Baric, a coronavirus researcher. The bio indicated that Baric’s projects have received tens of millions of dollars in funding from NIAID.

Fauci testified to Congress that NIAID didn’t fund any gain-of-function research, referring to experiments that enhance viruses, such as by modifying them to infect a different species. But Baric’s CV listed several NIAID grants that have been disclosed as a source of funding for gain-of-function research in a 2015 paper co-authored by Baric. That paper describes an experiment in which a bat virus spike protein that didn’t work on humans was grafted onto the SARS virus, resulting in a new virus that was capable not only of infecting humans, but was also resistant to treatment. The research was also funded by the EcoHealth Alliance group, which in turn received millions of dollars in funding from NIAID.

Some of Baric’s research has been conducted in partnership with the Wuhan Institute of Virology (WIV), which also received some EcoHealth Alliance funding. A leak from the WIV facilities has been identified by a number of experts as a possible origin of the CCP (Chinese Communist Party) virus that causes the COVID-19 disease and has claimed more than 3 million lives over the past 15 months, according to official statistics.

Fauci at first dismissed the lab-leak theory, but recently as the story gained more traction, he said he’s no longer ruling it out.

Shortly after Wolf’s Twitter account was suspended, YouTube blocked her from accessing her channel, called “Daily Clout.” It’s not clear why YouTube took the action and why at that time. Much of the channel’s content over the past year has been dedicated to criticism of COVID-19 lockdowns and the prospect of vaccine passports. The channel’s last video was posted in late May, more than a week before YouTube’s action.

As a former political consultant for campaigns of former Vice President Al Gore and former President Bill Clinton, Wolf sees her line of inquiry crossing vital interests of her own party.

“Dr. Fauci is clearly … an important part of the Democrats’ brand and their reelection strategy, right? They’re going to run on having beaten coronavirus and he’s being made the face of that,” she said.

While she’s not alone in asking pointed questions, her reputation as a liberal makes her criticism particularly inconvenient, Wolf said.

“The talking point of the administration is, this is a Republican attack, political attack on Dr. Fauci. Well, it’s not a political attack coming from me. I’m being a reporter and asking questions all serious reporters should be asking. So I think that makes me not a convenient voice to have in the mix,” she said.

Within a few days of Wolf getting censored, several media outlets ran stories labeling her as being “anti-vaccine” and said she was deplatformed for posting misinformation about vaccines. She denies those allegations, noting that both she and her children are vaccinated.

She called the reports “extremely inaccurate” and “defamatory,” noting that her social media posts were quoted “way out of context.”

It seemed to her that the articles all used the same source information, “as if from a press release,” though she didn’t want to elaborate further in order to avoid speculation.

“It was a very Stalinistic experience,” Wolf said.

Except for the Times of London, no outlet reached out to her for comment, she said. Even publications like The Guardian and The New Republic, which have previously published Wolf’s writings, ran their pieces without asking for her side of the story. Both publications didn’t respond to requests for comment by press time.

One claim against Wolf was that she called a COVID-19 vaccine a software platform, though she said her software reference wasn’t meant to be taken in a literal sense. Her Twitter post referred to the Moderna website, which calls the mRNA—a core functioning element of the pharmaceutical company’s COVID-19 vaccine—the “software of life.”

In another tweet, Wolfe suggested that perhaps the excrement of vaccinated people needs to be separated from general sewage, as it may contain the spike protein produced by their bodies due to the vaccination, which may then enter drinking water supplies. The comment was based on a Food and Drug Administration (FDA) document regarding the monitoring of potential “shedding” of “gene therapy products” by individuals receiving such treatment (pdf).

It defines gene therapy as “products that mediate their effects by transcription and/or translation of transferred genetic material and/or by integrating into the host genome and that are administered as nucleic acids, viruses, or genetically engineered microorganisms.”

The mRNA vaccines use nucleic acids carrying genetic material to prompt the translation of a spike protein by human cells. The protein then triggers the human immune system to develop antibodies that help the body fight off COVID-19.

Viral RNA (ribonucleic acid) can be detected in wastewater.

However, the FDA document says that “transmission to untreated individuals [via shedding] is an extremely low probability event.”

“I think it’s clear that when I said the white paper was ‘terrifying,’ that I personally found it terrifying,” she said. “I think these are fair questions to explore and honest emotions for me to share. I’m not a medical doctor—I am a citizen who has long written about the human body and the need to take care of it and to respect it.”

Concerns about spike protein shedding have so far been dismissed by experts.

In another tweet, Wolf recalled overhearing an Apple employee saying that the company was working on a technology that could deliver a vaccine with “nanoparticles that let you travel back in time.”

Wolf said she almost immediately deleted the tweet. She thought that she probably misheard what the person was talking about. There’s a product on the Apple Watch called “Time Travel” that allows the user, among other things, to go back in time to review one’s biometric readings. There’s also an emerging field of developing “bio-digital interfaces,” imagining a future where “we will wear or ingest bio-digital technology to monitor and enhance our health and lifestyle,” according to MIT.

Wolf has received a number of warnings from Twitter over the past several months regarding COVID-related content.

It resembled “behavior modification,” in her view, as the language used conveyed a “very demeaning way to treat any customer.”

“It was like the platform was training a 4-year-old. … ‘This is your second warning’ and ‘You have a time out,’ like you’re sent to your room,” she said.

One piece of content that was flagged by the social media company was Wolf’s reporting that a number of women have complained about menstrual irregularity after receiving the vaccine. The topic has since been broadly picked up by the media, quoting experts as saying the vaccines are still safe, but also acknowledging that there’s a lack of research on this issue.

Wolf suggested that social media companies need to be more transparent about the extent to which they stifle discussion.

“If people are not supposed to engage in thoughtful discussion or even joking discussion or rhetorical questions and they’re not supposed to raise public health concerns, then people should know because I’m quite sure that would lead to an exodus to platforms where people can say, ‘Hey, I heard that post-menopausal women are bleeding,’ or ‘I experienced this myself.’ I mean, we have to be able to educate each other as human beings, or else we don’t live in a free society,” she said.

In the past, her reporting helped to identify subpar or even dangerous health products that government authorities initially considered safe. Each time, the investigation started with informal, anecdotal reports from patients and consumers.

“A lot of really important information that made breast implants better or made contraceptives pills better or took vaginal mesh off the market arose in uncontrolled discussions,” Wolf said.

She said she can no longer pursue certain leads with the same intensity now.

“Every day, I get women emailing me testimony of menstrual disorders, like really dramatic ones. I’m scared to even report them because then I lose the last few platforms I have,” she said.

Wolf stressed that she doesn’t believe this was the reason for her deplatforming.

“I mean, I talked about vaccines and women’s health and myocarditis [as a side effect of the COVID vaccines in some people] for the duration of the pandemic,” she said.

“It’s no secret that I was very critical of lockdowns, of what they were doing to the economy, to children’s mental health, transfer of wealth. I mean, I’ve been very vocal about all these things. That’s not when I was deplatformed. I was deplatformed when I posted Dr. Baric’s CV.”

Update: The article has been updated with information regarding Naomi Wolf’s joining the lawsuit of former President Donald Trump.