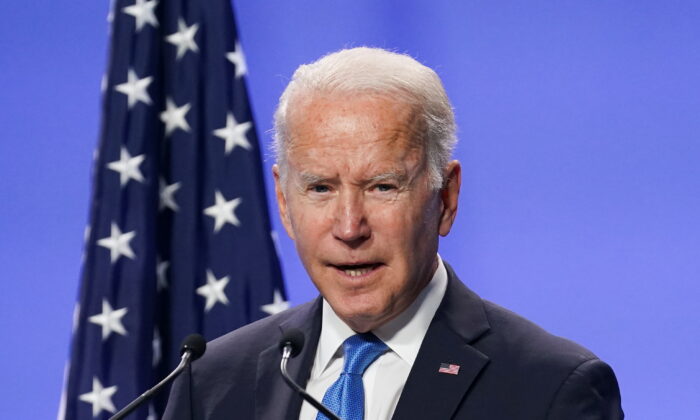 Numerous lawsuits have been filed against the Biden administration over vaccine mandates for private employers and federal contractors that are set to be published in the federal register on Nov. 5.

The attorneys general of Ohio, Kentucky, and Tennessee announced they would take legal action against the White House over the rule and filed a lawsuit (pdf) in a bid to challenge President Joe Biden’s rule affecting federal contractors.

The Biden administration unveiled details of its federal COVID-19 mandate on Nov. 4, providing a Jan. 4, 2022, deadline for federal contractors and health care employees who work at Medicare- and Medicaid-funded facilities. At the same time, the Occupational Safety and Health Administration (OSHA) issued a rule requiring businesses with 100 or more employees to make sure all workers are vaccinated or submit to weekly testing, affecting tens of millions of workers.

Kentucky Attorney General Daniel Cameron said that he takes “the issue of federal overreach seriously,” while Ohio AG Dave Yost joined the lawsuit, saying that “the Biden administration may not do whatever it wants, however it wants.”

“The Constitution lays out critical rules by which the executive branch must operate,” Yost said. “Congress and the states have their own powers, which the administration can’t just take over because it wants to.”

Despite the widespread pushback, Biden framed the issue as a choice between getting more people vaccinated or prolonging the COVID-19 pandemic, although numerous studies—including some published by the Centers for Disease Control and Prevention—have shown that vaccines don’t prevent transmission of the virus.

In addition to the three attorneys general, Missouri Attorney General Eric Schmitt said he would sue the administration over its mandate on private employers.

“The federal government does not have the authority to unilaterally force private employers to mandate their employees get vaccinated or foot the bill for weekly testing,” Schmitt wrote in his statement, adding that a number of businesses in Missouri have voiced concerns about the rule.

“We will be on file first thing tomorrow morning to halt this illegal, unconstitutional attempt by the Biden Administration and the federal government to impose their will on thousands of Missouri businesses and millions of Missourians,” Schmitt added on Nov. 4. “Missouri will not roll over, we will not back down—we will file suit imminently.”

Arizona Attorney General Mark Brnovich, who filed a lawsuit against Biden’s mandates after he announced them in early September, said he would sue the administration on Nov. 5, according to a statement.

South Dakota Gov. Kristi Noem, a Republican, announced via a Twitter video that her administration would join a lawsuit against the mandate, which she described as unconstitutional.

The Republican National Committee also said it would sue the administration and characterized the rule as an “attack on front-line workers, first responders, small businesses, and the rights of the American people.”