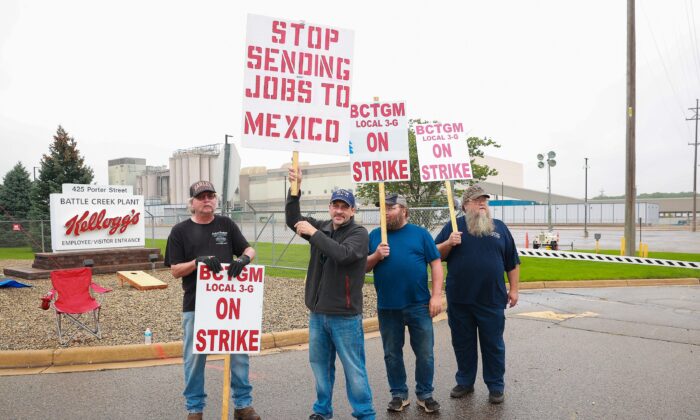 Kellogg plans to permanently replace some 1,400 workers who have been striking since October, the company announced this week.

“We have made every effort to reach a fair agreement, including making six offers to the union throughout negotiations, all which have included wage and benefits increases for every employee. It appears the union created unrealistic expectations for our employees,” Chris Hood, president of Kellogg North America, said in a recent statement.

“The prolonged work stoppage has left us no choice but to hire permanent replacement employees in positions vacated by striking workers. These are great jobs and posting for permanent positions helps us find qualified people to fill them. While certainly not the result we had hoped for, we must take the necessary steps to ensure business continuity. We have an obligation to our customers and consumers to continue to provide the cereals that they know and love,” he added.

The strike started because of disputes over pay, benefits, and the prospect of more jobs being moved to Mexico. Workers are striking at factories in four states: Michigan, Nebraska, Pennsylvania, and Tennessee.

The union said workers “overwhelmingly voted to reject the tentative agreement” and that the strike would continue.

Just days earlier, Kellogg said a tentative deal was reached, but that workers would have to vote to approve it.

The plan to replace the striking workers permanently drew criticism from President Joe Biden, who called himself “deeply troubled” by it.

“Permanently replacing striking workers is an existential attack on the union and its members’ jobs and livelihoods. I strongly support legislation that would ban that practice,” he said on Friday.

Rep. Andy Levin (D-Mich.) also offered support for the workers, writing on Twitter, “If we seek to be a democratic society with broadly shared prosperity, workers must be free to organize and bargain—and, yes, strike—without fear of losing their jobs.”

Democrats and several Republicans want to pass a bill called the Protecting the Right to Organize Act, which would strengthen penalties for employers that violate workers’ rights and enhance workers’ ability to boycott and strike.

For example, the bill would amend the National Labor Relations Act and make it an unfair labor practice to permanently replace an employee who participates in a strike.