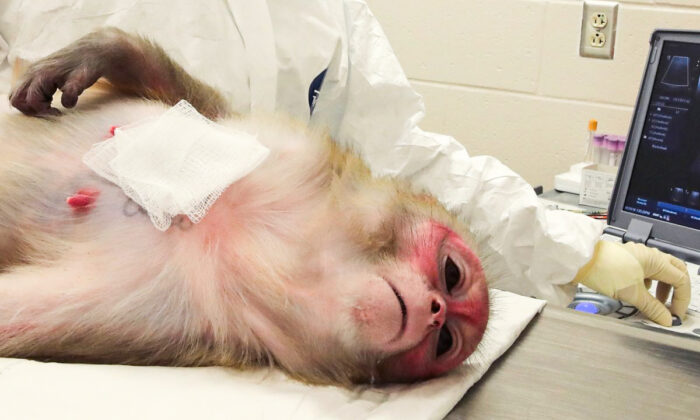 A group that investigates taxpayer-funded experiments on animals has disclosed a document exposing the National Institute of Allergy and Infectious Diseases’ (NIAID) “excruciating experiments” on rhesus monkeys.

The monkeys, which are owned by NIAID, are acquired from Morgan Island, off the coast of Beaufort, South Carolina.

Justin Goodman, vice president of advocacy and public policy for the White Coat Waste Project (WCWP), told The Epoch Times that the nonprofit taxpayer watchdog group obtained the document in October through a Freedom of Information Act request.

“White Coats is a reference to those conducting the experiment, and ‘Waste’ is a reference to the horrible return on investment the taxpayers are getting from this type of experimentation that agencies like the NIH admit are incredibly inefficient and rarely improve human health, though the NIH alone continues to spend $20 billion a year on animal experimentation like what’s being done to the monkeys from Morgan Island,” Goodman said, explaining the reasoning behind the WCWP’s name.

The document obtained by the group reveals that NIAID has spent $13.5 million in taxpayer funding on experiments that involve injecting the monkeys with various infectious diseases, such as Ebola and the Lassa virus that results in hemorrhaging, pain, brain damage, loss of motor control, and organ failure.

Dr. Anthony Fauci is the director of NIAID, a division of the National Institute of Health (NIH), itself a part of the Department of Health and Human Services (HHS).

“In many of these experiments, Fauci and staff intentionally withhold pain relief, even though these are some of the most excruciating experiments in the federal government,” Goodman said.

WCWP also recently exposed NIAID’s experiments on beagles, which involved having sandflies eat the dogs alive, as well as experiments that involved force-feeding 44 beagle puppies an experimental drug before killing and dissecting them.

A federal spending database shows that HHS has given Charles River Laboratories $13.5 million out of a potential award amount of $27.5 million since 2018 to breed and maintain the monkeys. NIAID paid $8.9 million of that $13.5 million.

The island is owned by the South Carolina Department of Natural Resources and is leased to Charles River Laboratories.

The island caught WCWP’s attention when the group was investigating “fear experiments” on monkeys taking place inside of NIH’s lab in Bethesda, Maryland. A deeper dive into those separate experiments at NIH led WCWP to discover that the source of the monkeys was Morgan Island.

“We started triangulating information about that island with the experiments at the labs, and we found that Fauci’s labs are the single largest supporter of that island,” Goodman said.

Between 500 and 600 of the monkeys are shipped to NIH and NIAID laboratories.

‘The Buck Stops With Him’

“It’s very unlikely that Fauci didn’t know about this, given the amount of money involved and the fact that these experiments are happening in his own laboratories,” Goodman said. “These aren’t being contracted somewhere else. They are happening in his own house. If he’s going to get credit for any good he does, he needs to get blamed for any bad that’s happening on his watch as well. The buck stops with him, and he’s certainly responsible.”

Vaccine research is the reason given for some of the experimentation. However, despite their biological similarities to humans, NIH has stated that nine out of 10 drugs that pass tests on animals fail in humans because they don’t work or they’re dangerous, according to Goodman.

“Research shows that despite their similarities to us, they are incredibly poor predictors of how vaccines and other drugs are going to act in humans,” he said.

In one of the procedures highlighted, NIAID staff performed a “cordectomy,” which involves cutting a dog’s vocal cords so that it can’t bark, howl, or cry during an experiment.

Dr. Stacy Lopresti-Goodman, a primate expert, psychology professor, and WCWP adviser, noted that the use of primates for the experimentation described in the obtained document isn’t only abusive, but inefficient as well.

“Primate experimentation is a cruel and notoriously unreliable way to develop drugs and treatments for humans, and it doesn’t deserve taxpayers’ support,” she said.

Dr. Tiffani Milless, a pathologist and medical adviser to WCWP, said that “infecting nonhuman primates with painful and debilitating illnesses with the goal of curing humans is not just cruel, but it’s incredibly wasteful.”

“The NIH should stop squandering tax dollars on wasteful and cruel primate testing that doctors like me cannot use to actually help people,” Milless said.

When reached for comment on the experiments, NIAID said the monkeys are used “for research that helps develop life-saving preventions and treatments for diseases affecting public health.”