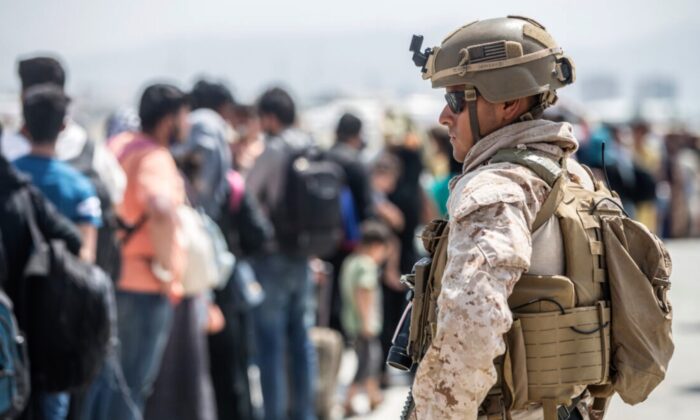 The ISIS-K terrorist who carried out a suicide bomb attack in August outside of the airport in Kabul, Afghanistan, had reportedly been released from prison just days before the Taliban’s overthrow of the government, according to a U.S. lawmaker.

“U.S. national security officials have now confirmed to me the reports that the Aug. 26 Kabul bomber was a known ISIS-K terrorist that was previously detained at the Bagram prison and was released along with thousands of others just days before the deadly attack,” Rep. Ken Calvert (R-Calif.) said in a statement.

Calvert, who is a member of the House Appropriations Subcommittee on Defense, told Fox News last week that he obtained information from intelligence sources that said the bomber was one of the 7,000 prisoners housed at Bagram prison, from which he was released by the Taliban terrorist group.

The Kabul bomber has been identified as Abdul Rehman—a known member of the ISIS-K terrorist group. He was incarcerated in Afghanistan for the past four years after being arrested in New Delhi, India, following a failed suicide-bombing plot, senior Indian intelligence sources familiar with the case confirmed to Firstpost, an English-language news agency based in India that also was first to report on Rehman’s release.

Rehman was reportedly handed over to the U.S. Central Intelligence Agency by the Research and Analysis Wing in September 2017 after his arrest in New Delhi.

“America’s disorganized retreat from Afghanistan has led to hundreds of highly competent and highly committed terrorists being set free to rejoin the Islamic State, al-Qaeda, and other terrorist groups,” an intelligence officer told the network. “Literally, a decade’s work on counter-terrorism has been undone by the United States’ failure to secure key prisoners in Bagram.”

Calvert blamed the Biden administration for the prisoner’s release, questioning “why these prisoners were not transferred and secured at another location.”

“Those responsible for these grave errors not only put our brave service members in harm’s way but have now—by our military’s own admission—placed Americans in greater danger than they were before,” he said.

A regional counterterrorism source told CNN that in mid-August, the Taliban emptied the prison in Bagram, along with another prison near Kabul, which together housed several hundred members of ISIS-K, as well as thousands of other prisoners.

Just about a week later, Hamid Karzai International Airport in Kabul was hit by the deadly terrorist attack that killed 13 U.S. service members, including 11 Marines, one soldier, and one sailor, along with more than 100 Afghans.

ISIS-K claimed responsibility for the attack, bragging about a suicide bomber “managing to penetrate all the security fortifications” put into place by U.S. forces and the Taliban.

Calvert told Fox News he will keep investigating the matter, saying he has “a lot of questions” he is trying to get to. He also noted that he believes the intelligence he received is “credible,” as he is part of the committee that “funds the CIA, NSA, NRO, U.S. Marine Corps, Army, Navy, the entire enterprise.”

“We need to know who they were, and also, where are the other 6,999 prisoners released?” Calvert said. “These prisoners were not just from Afghanistan, but from a lot of different places—God knows where they’re at right now.

“You have thousands of these terrorists running around,” he said, adding that the release of prisoners from Bagram “has undone decades of U.S. counter-terrorism work.”

“It is a threat, and it could be a major threat,” he said. “The administration might as well come out and tell the truth.”