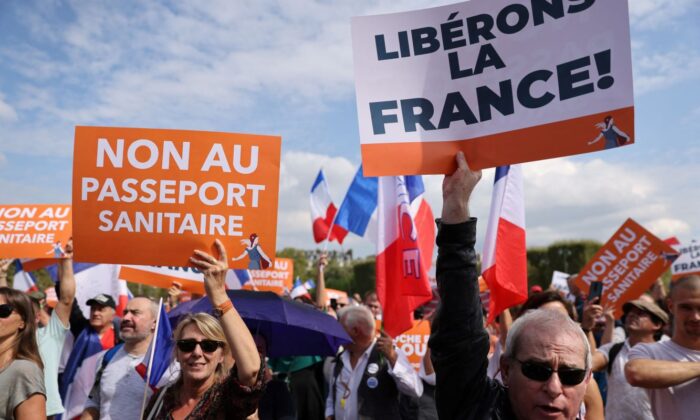 People hold placards reading, "no to the sanitary pass" (L) and "let's liberate France" during a demonstration in Paris on September 4, 2021 (THOMAS COEX/AFP via Getty Images)
Europe

‘I Will Not Submit’: 140,000 French Citizens Protest Against Vaccine Passport

The health pass, which was passed by the French Parliament weeks ago, mandates an individual be vaccinated, have a recent negative COVID-19 test, or prove they have fully recovered from the virus. Another law slated to go into effect this month will require all healthcare workers to get the vaccine.

While some media outlets have described the mass protests as “anti-vaccine,” many of the slogans and signs held by protesters go against vaccine mandates and passports, rather than COVID-19 vaccines themselves. Numerous protesters were seen on Saturday chanting, “liberte,” which translates to “freedom.”

“We are boycotting this health pass … In the end, this health pass will fall,” Florian Philippot, the head of the “Patriots” movement, reported Local Media, and he promised to go on a “general strike” for an indefinite period.

“We will always say ‘no’ to the sanitary pass. We’re not sheep,” said a Parisian woman to Ouest France, according to a translation. “No to discrimination, no to bullying. Freedom.”

A sign at a protest in Paris read: “I will not submit to health terror.”

Under the current vaccine passport law, only adults are eligible. However, that will soon change as all children ages 12 and above will be allowed to get vaccinated on Sept. 30.

Similar vaccine passports were introduced in other European nations, including Italy, Switzerland, Germany, and others, which also drew demonstrations. Over the weekend, protests erupted across Canada recent vaccine passport mandates.

In Toronto, David McLelland, a retired professor who taught at the University of Toronto, said the protesters are “an alliance in protection of human liberty” united by their opposition to the COVID-19 lockdowns and the restriction of freedoms.